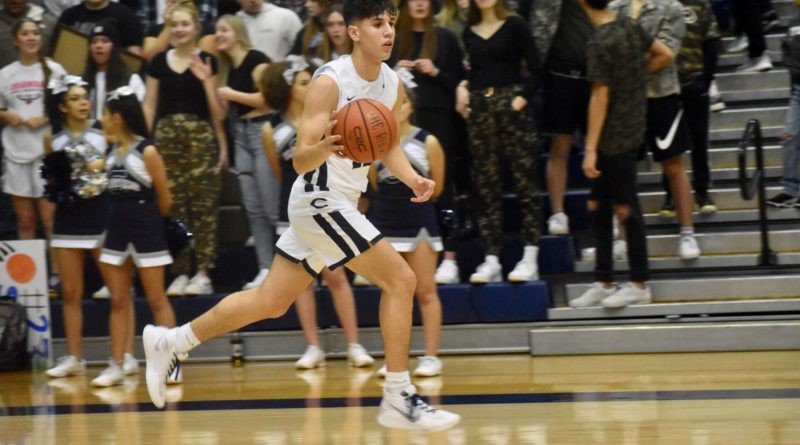 PASCO — Chiawana remained in a rarified grouping on Friday night.

In beating Kennewick 84-70 at in front of a packed home crowd at Chiawana High School, the Riverhawks (11-0) stayed one of three undefeated 4A teams across the state, alongside Union and Glacier Peak.

Moreover, Chiawana (11-0, 8-0 MCC) showed why it’s the team to beat in the MCC, as Richland’s boa grip as league champions appears to be over.

Jaden Martinez scored a game-high 27 points, including four 3-pointers, Taylor Perez scored 19 on a blistering 6 of 7 from deep and Cooper DeWitt added 10 for Chiawana, who hit 17 3s on 42 percent shooting from deep.

Ayoni Benavidez, the Mid-Columbia Conference’s leading scorer (and one of the top scorers across the state), led Kennewick (7-3, 5-2) with 19 points but sat for stretches with foul trouble.

RICHLAND’S REIGN OF THE MCC APPEARS OVER

The powers have shifted in the MCC — for now.

The Bombers’ death grip on the conference title, which includes a clean sweep of the league the past few seasons, and several deep state tournament runs, is loosened with the loss of an array of seniors, most notably league MVP Cody Sanderson and first-team all-league selections Garrett Streufert and Cole Northrup.

Chiawana isn’t necessarily senior heavy, but it has ample experience, which is proving to be crucial in a young-but-cutthroat league.

Kennewick was another step in the direction of a league title.

“It was very important to get this win,” Martinez said. “Kennewick was a good team, gave us a little bit more of a gap for the MCC title this year.”

Martinez has stepped up as the team’s leading scorer (15.5 points per game entering Friday), and DeWitt, the team’s distributor and veteran presence, isn’t far behind at 13.7 points per game, nor is Perez at 13.4.

Chiawana was in control of the game Friday throughout, and pushed the lead as high as 20 in the second half. Its reward?

A two-game cushion ahead of Kamiakin, Walla Walla and Kennewick — all teams it has beaten — atop the league standings.

KENNEWICK HAS THE MCC’S TOP SCORER. IT’S LOOKING FOR SECONDARY SCORERS TO MAKE A JUMP.

The Lions’ roster is littered with bruisers — guys who helped Randy Affholter’s kennewick football team make the 3A semifinals not two months ago.

What it needed Friday night was a secondary scorer to take over.

The Lions lean on Benavidez, the area’s top scorer (27 points per game), to spark their offense. He has the ultimate green light. But Friday, he was somewhat limited.

“Teams are really packing it in on him and playing physical with him and denying him the basketball,” Lions coach Braydn Leyde said.

Chiawana was no exception.

KOBE YOUNG COULD RETURN THIS SEASON

Among the more impressive facets of Chiawana’s blistering start: the Riverhawks have done everything without returning first team all-MCC wing Kobe Young.

Young, a junior, is a 6-foot-5 guard who is among the best pure athletes in the MCC – evident also by his increased interest from Division I college football programs.

But he suffered a stress fracture to his navicular bone when he rolled his ankle in a non-contact drill during football practice in the fall, requiring surgery and a recovery that doctors told him would keep him sidelined for 12 weeks.

Chiawana may have to continue to navigate an MCC chock-full of parity, but it could welcome back Young as early as a game or two into the postseason.

“Any time you add a player of Kobe’s stature, vertical leap and skill level, he’s definitely going to help us,” Herron said. “Kobe will add to what we do — guard off dribble, shoot 3s.”

Young still wears a boot at school and at home, but at practice takes it off to ride a stationary bike, row and shoot, though he still cannot jump, run or cut.

He said Thursday that the pain in his foot has subsided, though he doesn’t want to rush back early for fear of jeopardizing his health for AAU season.