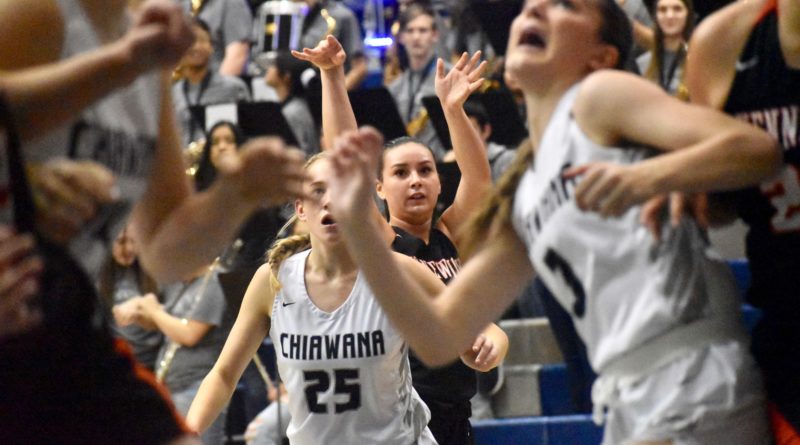 And up until the final second, the Chiawana junior standout was every bit as good as could be expected in a high-caliber Mid-Columbia Conference showdown Friday night.

But with a chance to tie the game, Von Oelhoffen missed a crucial free throw, and the Lions escaped with a 52-51 road victory in Pasco.

Von Oelhoffen, one of the best recruits in the country in the 2021 class, was fouled on a 3-point attempt with 0.1 seconds remaining, and the Riverhawks trailing 52-49.

The 6-foot-1 guard made the first attempt, but her second free throw hit into the back cylinder of the rim and spun out. She made the third one to finish with a game-high 29 points for the No. 5 Riverhawks (4A).

Madeline Gebers led the No. 7 Lions (3A) with 16 points, all coming in the first half. Aislin Fiander added 13 points – 11 coming in the fourth quarter. Her two free throws gave Kennewick the 52-49 lead with 8.6 seconds remaining.

For the first 2 1/2 quarters, the Lions (except for Gebers) were all out of sorts, especially offensively. They trailed by as many as 12 points.

Never panicking, they hung around – and eventually benefited when Fiander caught fire in the fourth quarter.

Her free throws with 1:04 remaining gave Kennewick its first lead (50-49) since the first couple minutes of the game.

“Early on … we were rushed,” Santo said. “But we settled down on offense.”

As far as EKU? It stands for “East Kennewick Uglies,” a self-appointed moniker that has become a backbone for the school’s athletic teams. Its motto is win “by any means necessary.”

IF THE LIONS GET ALEXES STEIN BACK, THEY HAVE THE MAKING OF ONE OF THE BEST FRONTCOURTS IN 3A

Kennewick is one of the better stories in girls basketball around the state.

The Lions have not been in the state playoffs since 2003 (although they did a 3A crown in 2000) – and have played a distance second fiddle to Kamiakin among 3A teams in the MCC the past half-decade.

And early on this season, they lost post player Alexes Stein to a shoulder injury.

But this short-handed Kennewick group is now 9-1. If Stein is able to return to the lineup, suddenly the Lions boast one of the best frontcourts in 3A with Gebers and Hawaii signee MeiLani McBee joining her.

“I am so proud of them,” Santo said. “We’ve been doing this without someone (Stein) who would average 15 points and 15 rebounds.”

ONCE THE RIVERHAWKS FIND THAT BALANCE IN PRODUCTION BETWEEN VON OELHOFFEN AND THE REST OF THE CREW, THEY WILL BE JUST FINE

Keep in mind, Chiawana has had Von Oelhoffen for just 11 career games after she transferred from Tri-Cities Prep after his sophomore year.

Yes, she has played with many of her current teammates in the offseason. But this was a big test Friday night, and while Von Oelhoffen showcased a high-level array of scoring moves, the rest of her team appeared hesitant to look for its own offense.

Especially in the fourth quarter.

Von Oelhoffen finished 11 of 25 from the floor. She also assisted on four other Chiawana baskets.

The rest of the team made eight of 30 field goals.

“We have a number of weapons,” Chiawana coach Mike Brown said. “It is just getting them the confidence to score, and not be in there just to be a passer or run a set.”