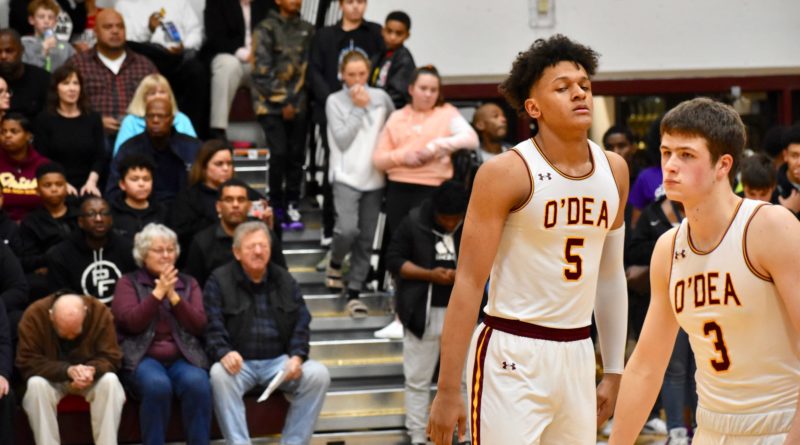 Banchero, ESPN’s No. 4 recruit in the nation in the class of 2021, admitted he was surprised when he saw how Garfield approached guarding him.

“I saw less” pressure than he has all season, Banchero said. “Not a lot of help. No doubles, you could tell they really thought they could stop me one-on-one. I took advantage of that.”

Eason (Cincinnati commit) and Munson (Pepperdine commit), both 6-8, took turns checking the 6-10 five-star prospect, who found various ways to score the ball. Eason blocked him once on a pull-up jumper, but for the most part, Banchero had his way.

“I haven’t seen that,” Banchero said. “My eyes lit up when I seen that. Every other game I’ve been getting gap help, doubles, triples, so seeing that, I really knew I could get my game on.”

Christofilis hit three 3s on consecutive possessions in the second quarter, sending the gym into a frenzy.

As he got the ball on an ensuing possession and pulled up for his fourth, a make would have turned the place into a powder keg. He missed, but it was only one of two misses from 3-point range by the four-star junior shooting guard.

He went 4 of 6 from deep and finished with 18 points and eight rebounds for O’Dea.

“I think the team played really well and I really fed off that,” Christofilis said. “I’m thankful I hit a couple of shots. Guys stepped up big.”

VINTAGE HIGH SCHOOL BASKETBALL. APPOINTMENT VIEWING. MANY WERE EVEN LEFT OUT IN THE COLD

Two claps for Seattle high school basketball — ones loud enough to be heard in the raucous tinder box that is the O’Dea High School gymnasium on Tuesday night.

O’Dea-Garfield had all the makings for a vintage Seattle high school basketball environment:

Toss in the fact that O’Dea’s downtown Seattle gym is roughly the size of a middle school gym? A logistical nuisance played

Both student sections and each bleacher was full for the freshman and JV games, and many watching from a standing room area near the door. O’Dea athletic director Monte Kohler said he closed the doors to the line of hopeful attendees at 6 p.m., an hour and a half before the game.

A word of wisdom: if planning on seeing O’Dea play at home this season, leave work early.

Andy Buhler is a reporter forScorebook Live Washington. Hear him weekly on the Scorebook Live Today podcast, follow him on Twitter@AndyBuhler; email at andy@scorebooklive.com.