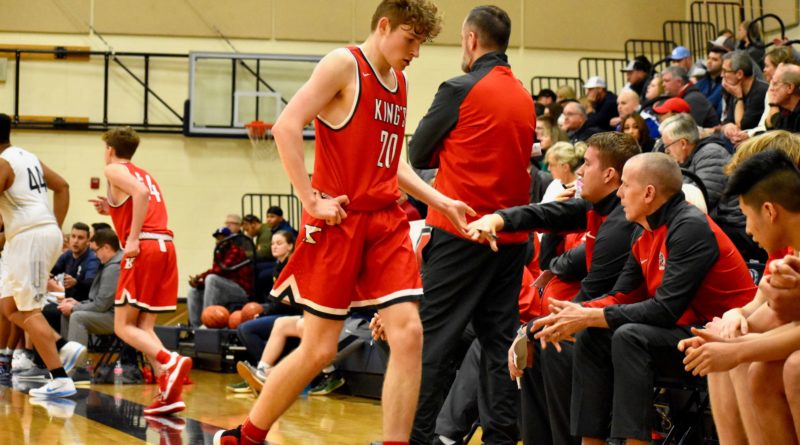 Tyler Linhardt scored 28 points, 18 in the second half, to lead Kings to a 75-66 road win over Kings Way, the team it lost to in the last second in the 1A state semifinals last season.

IT WAS A SCHEDULING WIN FOR BOTH TEAMS

The win came at a great time for Kings.

“We want to play as tough of teams as we can to prepare us for state,” Lindhart said.

Beating the team that caused a bitter end to Kings’ title hopes last season (King’s Way went on to finish second in state as a 10-seed after losing to Zillah in the title game)?

That was a sweetener.

Even though he laments being 5-4 and losing to Kings (5-7) on his home floor, King’s Way coach Daven Harmeling relished the experience of playing them and the team’s tough nonleague schedule at large.

The reality is: both teams, likely state playoff teams, have gone out of the way to challenge themselves in the early part of the season.

“I’m really glad we played them,” he said. “Every team really besides one has really gotten us outside of our comfort zone. For eight of the nine games to make you better, I love that.”

TYLER LINHARDT FOCUSED ON GETTING HIS BODY RIGHT. IT’S PAYING OFF.

He cut out sweets. He turned his workout regimen into hyperdrive. And now a leaner, meaner Linhardt is reaping the benefits.

“I lost a ton of weight,” Linhardt said, to the tune of 35 pounds, “trying to get more explosive, quicker.”

He cut out sugary drinks and other unnecessary sweets, and increased his cardio with track workouts. The driving reason? The sophomore wants to be able to defend at a college level.

“I definitely feel like I can stay in front of people better,” Linhardt, a preseason all-state selection, said.

Down two starters — Shane McGaughey-Fick (toe injury) and David Campbell (lung) were out — Kings marched out a starting five consisting of players all between 6-2 and 6-7, and ran a zone.

That gave Bryson Metz, a shifty sophomore point guard, challenges splitting defenders and getting the ball into the paint.

King’s Way struggled at times to get the ball in the lane, and turned to the 3-pointer, of which it hit 12. Harmeling felt his team’s shortcomings came on the defensive end, letting Kings pour 26 points on them in the fourth quarter to pull away.

“It allowed their very good players to get open looks and their role guys to get easy lay-ins,” Harmeling said. “You’re not going to beat anyone playing that way.”