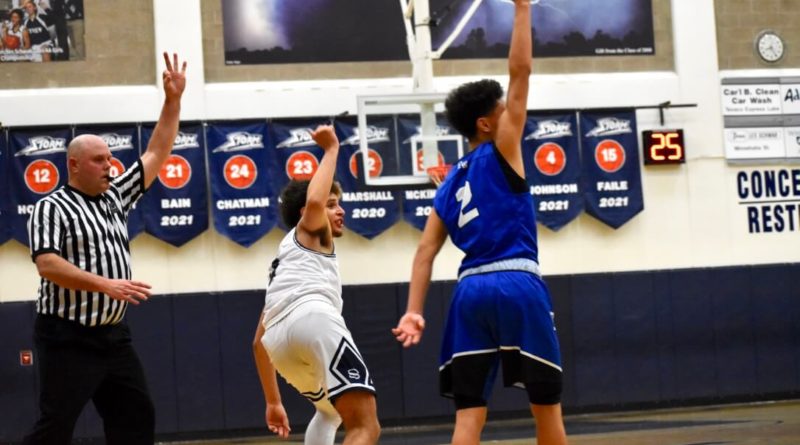 VANCOUVER — Squeeky Johnson had himself a career night.

Johnson is not a particularly animated character on the basketball court.

After hitting a contested 3 — one of six — in the fourth quarter right in front of his own bench, the junior point guard turned his head toward slap-happy teammates and flashed a deadpan as he backpedaled back on defense.

Every bit of Johnson’s career night helped Skyview upend the No. 2 4A team in the state. It was a statement from a player who is sliding over into the point guard role after standout Alex Schumacher, one of his closest friends, graduated (and is now starting at Saint Martins’).

But seeing that first shot go through? That gave Johnson, an efficient, consistent floor general, who has struggled from the field in both of Skyview’s losses, a sign.

“It was big for my confidence,” Johnson said. “Right then I knew I was going to be feeling it, so I just let them go.”

Stop if you’ve heard this one before: there is a clear top-two entering 4A Greater St. Helens League play.

On the heels of going 2-1 in the Cactus Jam in Arizona against teams from Alaska and California, the Storm nab a signature win heading into the season.

The win lays bare that undefeated Union (11-0) — which has wins over defending 4A runner-up Mount Si, top 2A team North Kitsap and the San Diego tournament Surf ’n Slam — is certainly not the only state tournament caliber team in a 4A GSHL that has Skyview and Gonzaga commit Kaden Perry and Battle Ground.

The Eagles wanted a road atmosphere against a strong opponent, which is why head coach Yattah Reed says they put the Storm on the schedule in the first place.

“That was the main reason of us coming out here,” Reed said. “We know they’re a good team and we wanted the challenge of playing them at their place … to prepare us for later down the road.”

And he offered no excuses — not the lingering ankle injury that has kept veteran floor general Williams at less than 100 percent — for the loss.

“We made some mistakes tonight that I thought we could do a better job on and we didn’t — but credit to them for knocking down shots.”

The Eagles, who still enter 4A North Puget Sound league play the favorite, will have five days before its next league game at Auburn Riverside to pore over film.