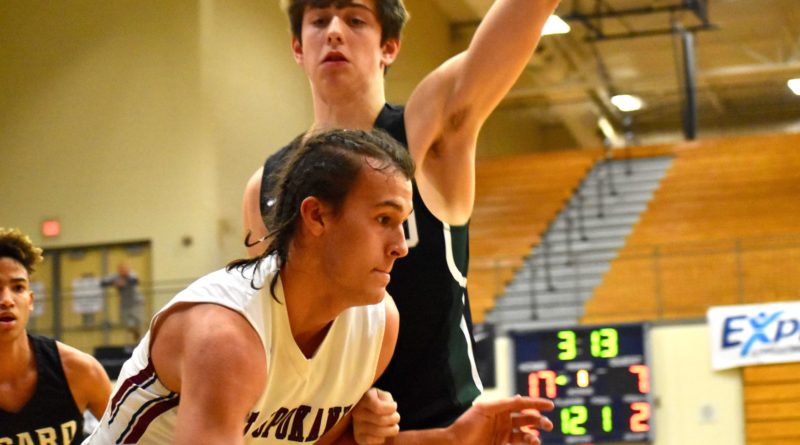 HILLSBORO, Ore. — Tigard (Ore.) waited until it was too late to commit to doubling Tyson Degenhart.

He made them pay.

The junior Boise State commit posted 35 points, 11 rebounds — his sixth 30-point game of the early season — to help Mt. Spokane past the Oregon opponent in the semifinals of the Les Schwab Invitational’s ancillary tournament,’The Eight,’ on Friday night.

“For a long time they had no answer for Tyson,” Mt. Spokane coach David Wagenblast said. “They started to double, but that doesn’t bother him too much.”

The Wildcats play the only other non-Oregon team, Pacifica Christian (Calif.) on Saturday night at 7:30 p.m. for the tournament title.

At two different points on Friday night, Degenhart got the ball around the top of the key, put the ball on the floor and crossed up the defender, attacked the rim and scored.

It’s the product of a an increased emphasis on his ball handling skills.

“He’s crossing over guards,” Wagenblast said, “just crossing up a guard and attacking a big. He’s just got an unbelievable touch.

It’s a component of his game head coach David Wagenblast said he didn’t have last season.

“He’s really raised his game. He’s twice the player he was last year.”

Thursday night against Sandy, he followed a crossover with a eurostep around challenging bigs.

HOT FIRST QUARTER MADE ALL THE DIFFERENCE

Mt. Spokane made quick work of establishing its lead in the first quarter.

The Wildcats went up 15-4 to force a timeout in the opening minutes and led 27-10 at the end of the first quarter.

“First quarter ended up being the difference in the game,” Degenhart said.

Added Wagenblast: “You could tell they weren’t quite ready for that pressure,” who posited that Mt. Spokane’s lead could have been more pronounced had JoJo Anderson, the team’s relentless perimeter defender, not caught two early fouls.

Mitch Stengle, the senior guard, took on a task that won’t show up in the box score: guarding Tigard’s best player, Drew Carter, a two-sport standout and Division I basketball recruit.

On offense, he pitched in 10 points as one of three Wildcats to score in double figures.

“I was excited for Mitch,” Wagenblast said. “I try to explain to the guys, ‘Tyson might be scoring 30, but we still gotta get another 50.’ He’s done a good job of responding.”

The Wildcats have jus two seniors on the roster — Stengle and 6-1 forward Kainoa Figueira.