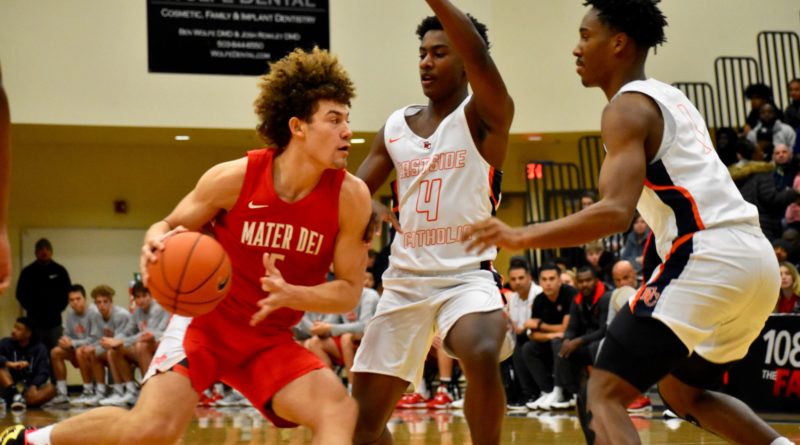 HILLSBORO, Ore. — Eastside Catholic’s undefeated run was ended by one of the country’s premier programs on Monday night.

After a statement win over Bishop Gorman (Nev.) and a throttling of Oregon power Jefferson, the Crusaders fell flat against national power Mater Dei (Calif.), 70-58, in the Les Schwab Invitational championship.

“We’ve always been versatile,” Eastside Catholic coach Brent Merrit said. “It can be anybody. There’s about seven guys you can count on to get buckets. We’re never pressed about how to score, for us it’s defense.”

Here are 3 observations as Eastside heads home to ready for the Metro League gauntlet:

AFTER LSI, CRUSADERS FEEL THEY CAN PLAY WITH ANYBODY

Eastside Catholic’s win over nationally ranked Bishop Gorman was a statement. And even in a loss to national powerhouse Mater Dei, the Crusaders feel confident heading into Metro play in the state’s most talented league.

“Obviously it’s not the result we wanted, but it’s motivation for us to come back and win state in Washington.”

In a league with defending 3A champion O’Dea and a talent-laden Garfield team with a two-time state champion coach in Brandon Roy, it’s Eastside Catholic who boasts the most impressive resume entering January.

ATTEMPTS TO FRUSTRATE ASKEW WERE UNSUCCESSFUL

Mater Dei went to inbound the ball out of backcourt in the first quarter, and its outlet pass, Askew, had two Crusader defenders draped over him, arms raised.

The ball was inbounded to another player, and Blackmon trailed Askew until the two got tangled, and Askew tripped to the ground. Blackmon was called for a foul.

Each attempt Eastside made, and the many capable defenders that were given the assignment of the five-star combo guard, were thwarted by a patience, meticulous playmaker that picked his spots throughout the night and drew fouls with relative ease.

“Be calm and let the game come to you,” Askew said. “Early in the game they were trying to get under my skin, pushing me around. I was just calm. I ended up getting foul calls, getting to the free throw line not even by attacking, and that’s how the game came to me.”

Merritt felt like the Crusaders’ tough brand of defense was disproportionately over-regulated on Monday night.

EASTSIDE PULLED CLOSE LATE, BUT COULD NOT CLOSE THE GAP

O’Dea transfer Patton Lanier hit consecutive 3s to put the Crusaders within two late in the third quarter, but they couldn’t quite make it over the hump.

Especially with Askew doing as Askew does.

The Kentucky commit answered a series of empty Eastside possessions in the fourth quarter with a three-point play to put Mater Dei up seven with five minutes to play.

USC commit Aidan Prukop then hit a corner 3-pointer after Hickman landed on his tailbone at the end of a high-flying contested drive. That put EC down 10 in the game’s final minutes — a deficit it could not climb out of.