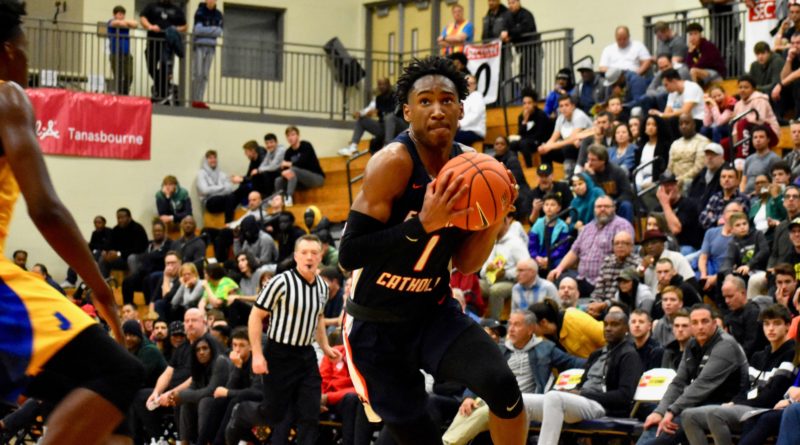 HILLSBORO, Ore. — Sure, it’s late December and Eastside Catholic is months away from its hopes at a 3A state title run.

But what would it mean to win one of the nation’s premiere tournaments, the Les Schwab Invitational?

“It’d mean everything,” junior forward Shane Nowell said. “It would definitely be a confidence booster.”

The Crusaders are one win away, after a definitive 58-39 win over Oregon 6A runner-up Jefferson (Ore.) on Saturday night at Liberty High School. JT Tuimoloau led all scorers with 17 points and Nolan Hickman added 12 points on 3 of 6 shooting from 3-point range.

A couple games into Nowell’s freshman year, he came off the bench and guarded Kevin Porter Jr., who is now a first round NBA Draft pick on the Cleveland Cavaliers.

His memories of the game are vivid.

“He ripped me, came down and dunked it,” Nowell said. “That was one of my moments that helped me learn.”

It brought to mind Jefferson’s leading scorer Marquis “Mookie” Cook, a freshman who has been Jefferson’s breakout contributor, and led the Demos in scoring (16 points) Saturday night.

Even as a freshman, Cook has had experience playing on stages similar to the Les Schwab Invitational. He played with the Blue Chips, an AAU team with Bronny James, son of Lebron James, and has already fielded several Pac-12 offers.

“This kid is very talented, he’s got a great culture behind him and I feel like he has a really bright future,” Nowell, a junior, said.

For Nowell, who finished with nine points, five boards, two blocks and three steals, the experience as a freshman has helped mold him into the player he is now for the Crusaders: versatile, commanding and wildly athletic.

FOR SECOND NIGHT IN A ROW, TUIMOLOAU WAS TOO MUCH TO HANDLE OFF BENCH

Tuimoloau is the first off the bench for the Crusaders as he gains comfort and conditioning on the hardwood coming off a 3A state championship, and his continued high-achieving football proclivities.

And he top-ranked junior recruit in the country, a defensive tackle, made an immediate impact for the second consecutive night.

Make no mistake: if not for football, Tuimoloau could have an impressive college basketball career.

He scored an immediate eight points in the first quarter, and did it in multiple ways: a 3-pointer, contested jumper, and a finish at the rim.

EASTSIDE CATHOLIC LEFT NO DOUBT WHO WAS THE BETTER STATE POWER: ‘THAT WAS OUR INTENTION.’

After a slow start a day ago when Eastside saw Bishop Gorman open with a 13-1 lead, the Crusader players wanted to send a message against a traditional Oregon power.

Plus, they heard Jefferson’s poking and prodding in the lead to the game. So they left no doubt. The Crusaders outscored the Democrats 22-4 in the first quarter and built a 42-16 lead by halftime.

“That was our intention,” Eastside Catholic coach Brent Merritt said. “(Jefferson) got a little swag to ‘em, they were doing a little bit of talking. You’re dealing with a group of kids who are nothing but motivated. … if you start talking to ‘em, get ready.”

This was a Jefferson team that rolled to the quarterfinals with wins over Battle Ground (28 points) and Crater (Ore.) (18 points), and possesses a rising freshman standout in Cook, 6-7 Washington State commit Nate Rawlins-Kibonge and several other Division I prospects.

Andy Buhler is a reporter forScorebook Live Washington. Hear him weekly on theScorebook Live Today podcast, follow him on Twitter@AndyBuhler; email at andy@scorebooklive.com.