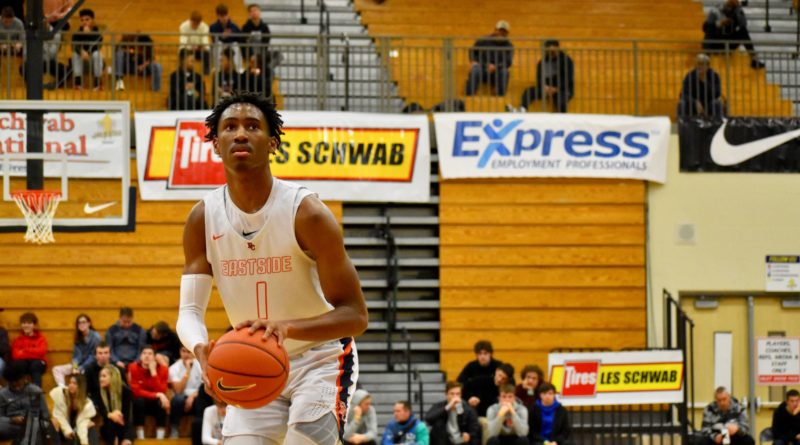 HILLSBORO, Ore. — Eastside Catholic made one heck of a statement on Friday night.

The Crusaders built up a third quarter lead and held on late to take down nationally-ranked Bishop Gorman, 62-59, in the Les Schwab Invitational quarterfinals on Friday night at Liberty High School in Oregon.

JT TUIMOLOAU IS A SUPER-SUB — FOR NOW

The nation’s top recruit from the class of 2021 is a week removed from Eastside Catholic’s Geico State Championships Bowl Series loss to Marrietta (Ga.), and not yet a month removed from the 3A state championship game, so his time on the basketball court has been limited.

You wouldn’t have known it by his performance Friday.

Tuimoloau, a 6-foot-5 hulking yet fleet-footed swingman, who head coach Brent Merritt says can play all five positions on the floor, got to work inside quickly after he subbed in off the bench. He had 12 of his 14 first half points in the second quarter to help the Crusaders clawed back from an early 14-1 deficit.

Gorman couldn’t stop his scoring, and he contributed in other ways, too, pulling down six rebounds and dishing the assist on Eastside Catholic’s last possession of the game — a baseline dish to a cutting Nowell for a two-handed dunk.

Head coach Brent Merritt said he plans to bring Tuimoloau off the bench until after he returns from a couple national football commitments that will cause him to miss two games. Tuimoloau will continue to start second halves like he did Friday night.

“He had a bad game yesterday and I was all over him,” Merritt said. “Called him every name in the book, told him he was soft, and he just said ‘OK coach.’ I told him he was going to have a good game today. He said ‘coach I’m ready, they can’t stop me,’ and he showed it.”

WIN IS A STATEMENT FOR THE CRUSADERS

Bishop Gorman had three seconds to inbound the ball and take it the length of the floor for a chance to tie the game with a 3-pointer and initially, Merritt wanted his players to foul.

But the team was adamant: they wanted to defend them straight up.

It was a defining moment in a game where the Crusaders (6-0), who assumed the top spot in this week’s all-classification top-25 rankings, made play after play on both sides of the ball to hang on to win a game that they say is momentous for the program.

“It was huge for us,” Tuimoloau said. “I don’t think Eastside Catholic has ever beaten a ranked team in basketball.”

Eastside Catholic was not selected for the coveted Les Schwab Invitational field a year ago, rather slotted in the precursor tournament dubbed “the eight” which is a step down in competition from the main event.

Friday’s win was a proving point for the undefeated Crusaders, who play returning Oregon 6A runner-up Jefferson at 8:30 p.m. Saturday in the tournament semifinals.

Good luck getting much past the Crusaders rangy defense.

With a backcourt starring Division I prospects Nolan Hickman, a 6-4 guard who can do everything well and plays with a flare, 6-5 swingman Shane Nowell and team captain Syon Blackmon, Eastside Catholic may have the top backcourt in the state of Washington.

It sure gave a nationally ranked team trouble Friday night.

They prevailed against a team that sports four high-major Division I recruits: Zaon Collins, Noah Taitz, Mwani Wilkinson and Will McClendon.