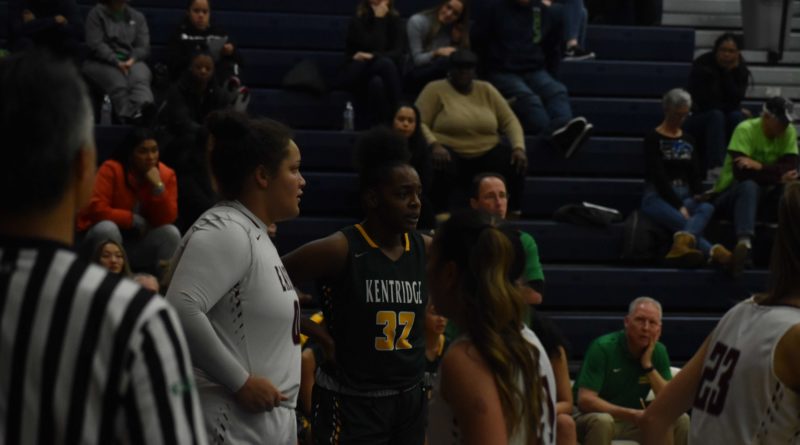 It’s not often you see the best two future Pac-12-bound senior post players battle it out in regular-season games.

But that happened Friday night at the “Top of the Peak” holiday tournament at Glacier Peak High School in Snohomish.

Kentridge’s Jordyn Jenkins (USC) and Eastlake’s Keeli Burton (Arizona State) both had their moments in the No. 1 Chargers’ 61-51 victory in the opening round of the tournament.

Jenkins had 21 points, 15 rebounds and four blocked shots in Kentridge’s win over the reigning Class 4A champions. Burton had 19 points and 14 rebounds for the Wolves.

JORDYN JENKINS IS USED TO BULL RUSHING DEFENDERS. NOW, SHE CAN MAKE THEM LOOK FOOLISHLY SLOW-FOOTED, TOO

When the Chargers won the 4A title in 2017, Jenkins was the interior tormenter as a ninth grader.

But slowly, she has expanded her range throughout the years.

On Friday, Jenkins – at 6-foot-2 – handled the ball quite a bit, especially in transition. And she fired off a few shots from long range.

“This year, I have a lot more freedom,” Jenkins said.

Chargers coach Brad McDowell said he is OK with Jenkins firing off a couple of 3-point shots, too (and her shooting percentage has been pretty good so far).

“But not five of them, because then I think we are losing some of her other skill set,” McDowell said.

A VIRTUALLY NEW EASTLAKE CAST HAS SOME GROWING UP TO DO

Things are quiet around the camp of the defending state champions, even though they feature two of the best players in the state in Burton and junior Haley Huard, who can really shoot it from the perimeter.

Five seniors graduated from last year’s title-winning squad, so coach Sara Goldie is trying to get a new set of starting guards integrated into the system.

“For the most part, maybe I would have liked to see us a little more comfortable with some of the stuff,” Goldie said. “We came in and hoped to put in at least three-quarters of the system in up to this point. We did that, and it was too much, so we are now at half.”

Goldie said her goal was for the Wolves to finish around “15-5” in the regular season, then find their stride in time for the playoffs – something they did masterfully a year ago.

IS THIS THE YEAR KENTRIDGE GOES THE DISTANCE AGAIN?

The 4A field is deep this season with the likes of Woodinville, Glacier Peak, Inglemoor, Central Valley, Eastlake, Chiawana and, yes – Kentridge.

In fact, heading into the New Year, the Chargers have established themselves as the team to beat, rolling along behind Jenkins, point guard Dayla Ballena and wing Kiernen Denckla.

“You have to start and finish with (a state title),” Jenkins said. “It will kill me if we don’t get it. I feel like we can. I feel the only team that will stop us is us.”