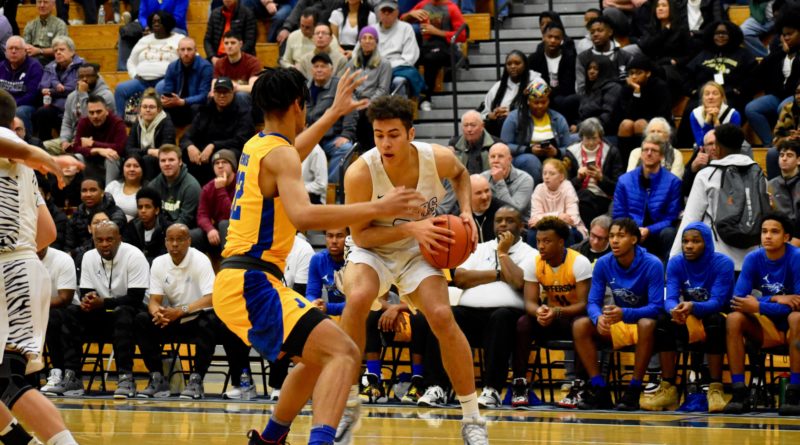 HILLSBORO, Ore. — Brendan Beall notched 21 points and Kaden Perry added a double-double before fouling out as Battle Ground lost to Jefferson (Ore.) 82-54 in the first round of the invite-only Les Schwab Invitational on Thursday morning.

Perry fouled out with around three minutes left in the third quarter as Battle Ground (6-3) trailed by 17.

The Democrats, who finished second in state in Oregon’s largest classification (6A) last season, ran away with the game from there.

“We showed a lot of heart out there, a lot of character, knocked down some shots, got some other guys some time to do some stuff out there,”  It is what it is.”

Perry, a Gonzaga commit, is the focal point of the Tigers offense, defense and everything in between.

So when he picked up his fifth foul — his last three fouls happened on consecutive plays — Battle Ground’s chances at a double-digit comeback were significantly stifled.

When Perry has struggled with foul trouble over the past few seasons, Battle Ground guard Brendan Beall and Nate Millspaugh understand they need to score more.

“Without him, especially on defense, it’s just tough, especially since they have so many athletes, so many big guys who are skilled,” Beall said. “I though our intensity is good, we just couldn’t match their size.”

Battle Ground missed its first eight field goals, and weren’t much better at the free throw line in the game’s opening minutes.

More than eight minutes went by before the Tigers scored their first field goal, and when Perry began to attack the basket and draw fouls, he started 2 of 8 at the free throw line.

That marks the Tigers’ second slow start in 10 days. In its Dec. 16 loss Evergreen, the Tigers were marred by a slow start they weren’t able to catch up to.

Thursday wasn’t exactly a repeat performance — the opponent was perhaps more daunting physically and the stage was notably more grand — but the Tigers’ will have a quick turnaround to make sure it doesn’t start slow again when they take on Clackamas (Ore.) at noon Friday.

“We just need a little bit better focus obviously to knock down our jumpers at the beginning of the game,” Melo said.

BATTLE GROUND MAY NOT FACE A MORE ATHLETIC TEAM ALL YEAR

Taking on a perennial state title contender in Oregon, and its multiple Division I recruits, will only stand to help the Tigers— even in defeat.

As per usual, Perry was quickly doubled when he touched the ball, but this time by bigger bodies than the Tigers had seen all season.

After the LSI, they will have an 11-day break before beginning the gauntlet of 4A Greater St. Helens League play, where they will vie to upstage their third place finish from last season.

But they’ll have to go up against the hottest team in 4A in Union, and a tough Skyview team that currently sports one loss.