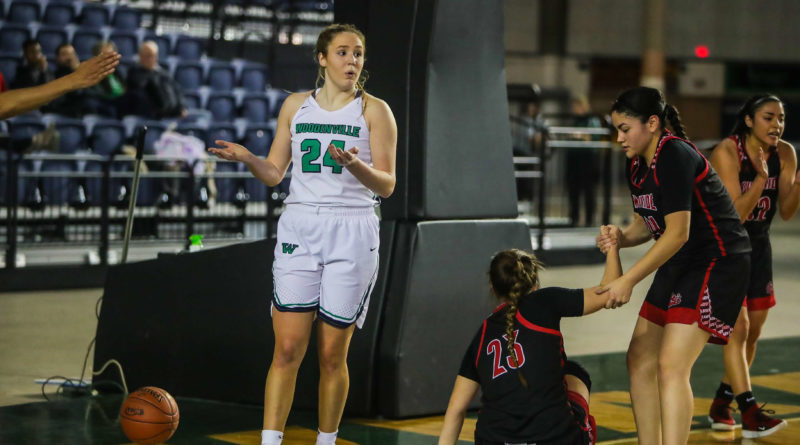 He just hopes the Falcons can keep it up.

A night after surviving a 4A KingCo overtime thriller against Inglemoor, the Falcons had a different kind of test awaiting them Saturday afternoon – the Lynden Christian Lyncs, also ranked No. 2 and one of the true powerhouses in the Class 1A ranks.

Led by Veronica Sheffey’s season-high 23 points, Woodinville held off the Lyncs, 61-52, at the Highline College Shootout.

Many of his regulars, notably Sheffey and all-state standout Mia Hughes, played all 36 minutes Friday night. And they were well over 30 minutes again just 18 hours later.

“You know they are tired. They are hurting,” Bullock said. “But they keep giving.”

Last season, the Falcons had a group of point guards, including Sheffey, who came off the bench as a ninth grader.

This season, it is her show.

And her soft jumper that just beat the shot clock capped a decisive 6-0 run in the fourth quarter to give the Falcons a 55-46 lead with 3:31 to go.

“She loves to play,” Bullock said.

IF YOU DIDN’T LOOK AT A GAME ROSTER, YOU’D THINK YOU WERE WATCHING A HUGHES’ CLONE

With an endless work rate, Hughes is one of the best finishers and rebounders in the state as a junior.

But the Falcons might have her twin, only taller.

Her name is Brooke Beresford, a 5-foot-10 ninth grader.

Beresford is a straight-up baller who, like Hughes, is a menace on the fastbreak.

“Her mom was a basketball player at Edmonds-Woodway. Her dad played football, as does her brother (Cade, who is at Washington State University),” Bullock said. “She can shoot it. She has more of an outside game than Mia.”

There isn’t much that fazes the Lynden Christian girls.

But facing one of the top teams in 4A was an even tougher challenge – one the Lyncs were up to.

They whittled a 16-point first-half deficit to 49-46 with five minutes remaining. Lexi Hernandez led them with 17 points, while Riley Dykstra chipped in with 13.

“For us, it’s a risk to play good teams and get beat, but we took advantage of the opportunity. We were resilient. We battled,” Lyncs coach Brady Bomber said.

“We put pressure on them the whole game. It was a playoff-type game.”