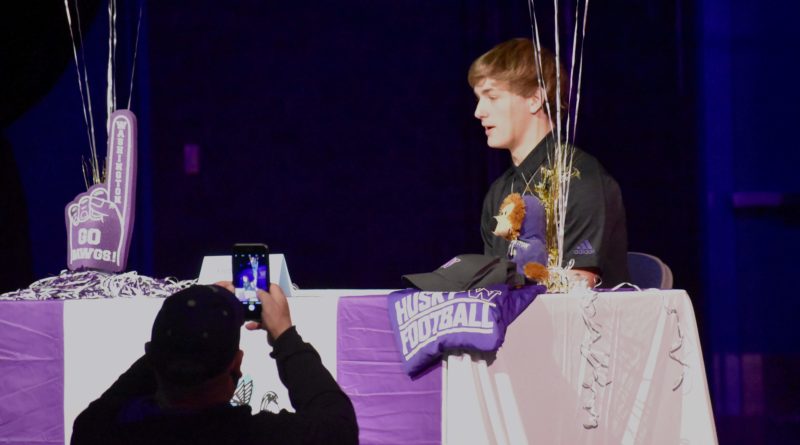 HOCKINSON — Sawyer Racanelli’s phone lit up early Wednesday morning shortly after he got out of bed, but before he was fully awake. It was University of Washington receivers coach Junior Adams was calling him on FaceTime.

“He said ‘you got this paper signed, we good?’” Racanelli said.

The standout wide receiver sent him a picture of his signed National Letter of Intent that ensured he’d be a Husky, hours before his official signing ceremony at Hockinson High School on college football’s early signing day.

Racanelli put pen to paper on a commitment made in May, before a torn Anterior Cruciate Ligament sidelined him from his senior season, and before Husky head coach Chris Peterson announced he’d be stepping down after the season.

“They just want to make sure you’re 100 percent in,” Racanelli said, as he cracked a smile. “They got me.”

But it was Lake, the Huskies’ soon-to-be first-time head coach, who was UW’s first coach to visit Hockinson to look at him during his sophomore year. The Huskies began recruiting him as a linebacker.

Lake was always very present at Sawyer Racanelli’s unofficial visits, and was a part of why he bought into Washington as a program. And when Racanelli tore his ACL over the summer, he underwent surgery up at UW, and said the program took complete care of him.

And shortly after news of Peterson’s departure broke in the form of an athletic department press release on Dec. 2, in which the coach said he needed to take a step back and “recharge,” Peterson called a shocked Sawyer and Josh Racanelli to touch base, as did Lake and Adams, who had previously set up an in-home visit days after the news broke.

Josh Racanelli reminded his son what he’d said all along in the recruiting process as offers from major power-five schools began to pile up: invest in good people, not just a product.

“I never thought of de-committing because of what they’ve done for me, with my leg,” Sawyer Racanelli said. “I was blindsided, but once I talked to coach Lake and their other staff, they were like ‘everything is going to stay the same.’ I didn’t just pick UW because coach Pete was there. I picked it because of the coaching staff, people, players, everything that it has opportunity-wise.”

He took his official visit last weekend and visited with Smalls, Bruener and Hatchett as he continues to rehab his knee.

“A lot of [recruits] were excited about it, they were like this is a new opportunity, new focus, new mindset,” Sawyer Racanelli said. “Everyone was just like ‘let’s go.’ They like that new swag mentality of coach Lake, which coach Pete had, but it was old-fashioned. He’d done things the way he’s done thing and has been successful. Everyone’s excited to see what coach Lake can do.”

Sawyer Racanelli thanked his family, coaches, teammates and many more during the ceremony Wednesday morning. He shared before his grandfather passed away, before Racanelli rose to become one of the state’s top prospects, he told him he’d end up at Washington.

He’ll go from small-town Hockinson (2A), located 15 miles northeast of Vancouver, where he caught passes from his state player of the year brother, Canon Racanelli, then won another state championship catches passes from his cousin, Levi Crum, to what he sees as another family in Washington — though one has a slightly higher profile.