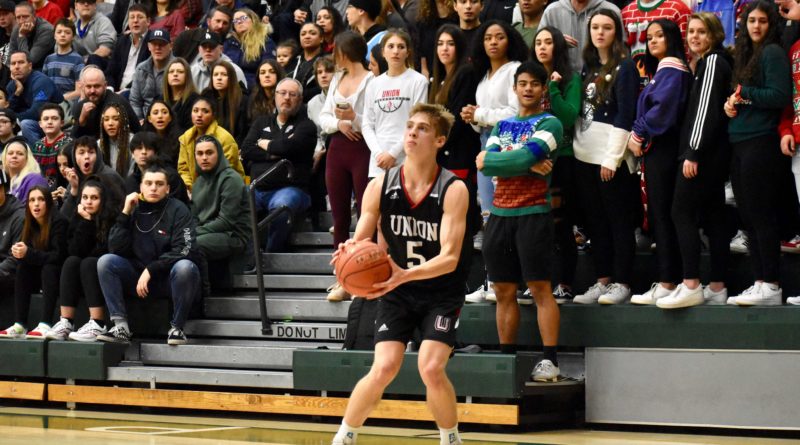 VANCOUVER — Tanner Toolson scored 36 points and pulled down 11 rebounds to help Union hand Evergreen its first loss of the season, 99-63, in a nonleague boys basketball matchup at Evergreen High School.

Union (7-0), which shot 51 percent from the field, scored 28 points in the first quarter and led by 23 at halftime. Toolson did most of his scoring in the second half (21 points) when the game was well under control.

The key to Evergreen’s win over Battle Ground Monday was a fast start and hot early shooting.

Union did that Wednesday night, but the hot shooting never subsided — the Titans never gave Evergreen a chance to get back in the game after building its 20-point first half lead.

Any team looking to beat Union this season is going to either have to play their speed, or attempt to do something no team — not even preseason No. 1 Mount Si — has been able to do: slow the Titans down.

“We’ve had good starts every game,” Union coach Blake Conley said. “The starts and establishing the tempo and the way the game’s going to go, it’s important for us to do that early.”

Evergreen is one of the more athletic teams in Southwest Washington, yet Tanner Toolson asserted himself as the most versatile athlete on the floor.

Not only did he shoot the 3-ball well (5 of 11 from deep), own the glass (11 boards) and run a bit of point guard, but he also snagged two steals and sent a layup attempt by Zyell Griffin, a terrific athlete in his own right, off the backboard in the second half.

Toolson’s well-roundedness has been in the works since freshman year, Conley said, when he stood about 5 foot 6. Now? He’s 6-5, and the consistency of his years of work are beginning to pay off.

“He’s wired differently than other kids, so it’s really cool him have the season he’s having.”

Kaden Horn was the leading scorer for a Mountain View team that made a run to the postseason. He had several 30-point games and poured 37 points on Fort Vancouver in a league game last season.

Now, he’s a Union Titan. And the junior is fitting nicely as a compliment to Toolson and guard Brad Lackey.

“When he’s out there, you can’t focus on him,” Conley said of Horn, a transfer. “When a team does take him away, we can focus on other things. … he fits in so well.”