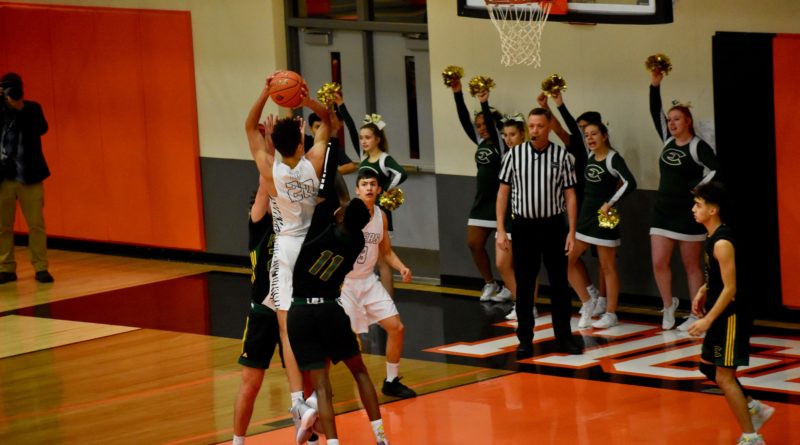 Perry posted 28 points and 17 rebounds on Monday at Battle Ground High School, many coming in the second half as the Tigers erased a 21-point lead to pull within four points late.

But Evergreen held on, thanks to hot early shooting from Carter Monda and 7 of 8 free throw shooting as a team in the final minute.

A year ago, the Plainsmen, who went 8-12 last year, gave up 92 points and lost by 35 to Battle Ground. This time, they flipped the script.

Sure, head coach Brett Henry acknowledged that wins don’t matter as much as hitting specific team goals at this early juncture of the season, but sitting at 5-0 and hitting goals?

He’ll take it. So will the players, who are clicking better than they did perhaps all of last season.

Coming off of a football season in which the program — many of the same players now on the hardwood — posted its best record since 2008 and made the playoffs, Evergreen feels there is an opening for it atop the 3A Greater St. Helens League. Kelso must replace 3A player of the year Shaw Anderson Prairie is down former league MVP Kam Osborn.

“It’s open for anyone to take,” Henry said. “It could be anyone. I’m excited about that.”

It’s beat four of the five 4A Greater St. Helens League teams to show for it (and it plays undefeated Union on Wednesday).

“We have that winning mentality,” Griffin said.

PLAINSMEN CHALLENGED BATTLE GROUND’S SHOOOTERS TO BEAT THEM. AND THREW ATHLETES AT PERRY.

When Battle Ground is at its best, its two senior guard Nate Millspaugh and Brendan Beall are making defenses pay for any extra attention to Perry.

“Our primary goal was to take out those two guards, and with the other guys, surround (Perry),” Henry said. “Hopefully slow him down a little bit. … We just wanted to make it really difficult.”

Griffin, who is seven inches shorter than Perry, made entry passes difficult and fought on the boards, as did the taller Herring. The Plainsmen ended up crashing double and triple teams on Perry.

It worked for much of the first half, as Perry and the Tigers struggled to get much going on offense. But in the second half, Perry could not be denied, many of his points down the stretch coming off of his own offensive boards.

Perry, a junior, committed to Gonzaga in June and proceeded to play in the Nike Elite Youth basketball AAU circuit, a hotbed of the nation’s top recruits, for the first time.

“My confidence just got better,” Perry said, “and confidence alone has made me a better player.”

Perry has had several 25-plus point games so far this season, and feels he’s playing with more ferocity and authority.

“Just being athletic, not being afraid,” Perry said, “I used to always be afraid of trying to not look stupid . It’s like, hey, if it gets me a bucket, or it gets me a stop, it doesn’t matter how it looks.”