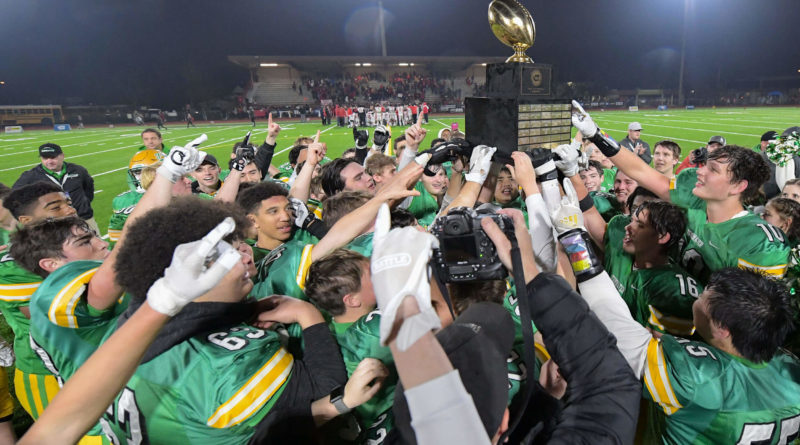 If you needed the ultimate nod of approval on what Tumwater High School accomplished this season, it came from the dean of coaching Saturday night.

Top-ranked Tumwater finished off its undefeated season with a 48-34 victory over No. 2 Steilacoom in the Class 2A state championship game at Sparks Stadium in Puyallup.

The game saw 11 new 2A title game marks set, including most combined points (82).

The Thunderbirds set the record for most rushing yards in a game (422), breaking Othello’s previous mark of 406, set against Elma in 1998.

Senior Dylan Paine paced the attack with a season-high 229 yards and three touchdowns.

Here are five takeaways from the Tumwater-Steilacoom game:

A DIFFERENT TYPE OF GAME, BUT THE SAME RESULT FOR RESILIENT THUNDERBIRDS

This season, Tumwater had won close games (for example, 27-14 over Bellarmine Prep), and blowouts (nine games by 40 or more points).

But this was a good, old-fashioned shootout Saturday.

The teams traded touchdowns for the first quarter-and-a-half before Tumwater got back-to-back defensive stops to close out the first half.

“What is always tremendous to me about these kids, no matter what happens, they do not lose sight. They don’t get rattled. They keep going and go about their business,” Thunderbirds coach Bill Beattie said.

“There was a time there where I think a lot of teams would have folded. These guys, no big deal – let’s get it going again.”

Trailing 20-13, the Sentinels made one big push at the end of the first half to score a game-tying touchdown.

Quarterback Chance McDonald completed his first five passes, including a final 19-yarder to Emeka Egbuka with three seconds to go. A roughing-the-passer penalty put the Sentinels at the Tumwater 3-yard line for the final play.

Once again, McDonald looked in Egbuka’s direction in the fight flat, even against a double team. The junior got free near the back of the end zone, but the pass floated too far as time expired.

“We knew that was where we wanted to go with it,” McDonald said. “I just threw it a little bit too long, and that was my fault.”

On the first play of the second half, Tumwater’s Hunter Baker got loose on a 56-yard touchdown run to push the lead to 27-13, giving the 2A EvCo champions much-needed breathing room.

STOP QUALIFYING CODY WHALEN AS JUST A GOOD WING-T QUARTERBACK. HE IS A BONA FIDE PASSER

All season, Beattie said one of the biggest differences in the Tumwater offense was the emergence of junior quarterback Cody Whalen.

Coming into the 2A title game, Whalen had passed for 1,472 yards and 19 touchdowns.

On Tumwater’s first drive Saturday, Whalen converted two third downs on passes (12-yarder to Jaylen Clay; 11-yarder to Austin Terry), then got the Thunderbirds on the scoreboard with his 22-yard touchdown strike to Danny Goodburn.

“He’s so smart, makes the reads – and he is a heck of an athlete,” Beattie said.

Whalen has heard all the comments from other players that if you can stop Tumwater’s Wing-T rushing attack and make the offense pass, you can get stops.

“It pushed me to be more precise, and to get the job done,” Whalen said. “I definitely feel I got my name more out there, but that wouldn’t have happened without my line, my receives and a great (offensive) system behind me.”

There wasn’t much the Thunderbirds could do to slow down Steilacoom’s passing attack Saturday (McDonald set the 2A game record with 479 passing yards).

And in the second half, Jones made two big-time plays to stop Steilacoom drives.

On fourth-and-2 near midfield, McDonald hit Egbuka on a bubble screen near the right sideline that Jones blew up for no gain.

And at the end of the third quarter, Jones cut in front of Brady for an interception that let to Baker’s 87-yard touchdown scamper.

“Jack has been big all year,” Beattie said. “You look at him, he’s not a huge guy, but he is a battler. Those plays were fantastic.”

IN HIS BIGGEST MOMENT, BEATTIE SALUTES HIS MOST IMPORTANT MENTOR

Considering that Beattie played at Tumwater, only to return to his alma mater three years to replace his former coach (Otton), this night was as special as they come.

“You know, I am gong to find Coach Otton and give him the biggest hug and the biggest thank-you,” Beattie said. “I would not be here without that man. To sit here so many years later as a state champion, it is all credit to that guy He is the one who set this up.”