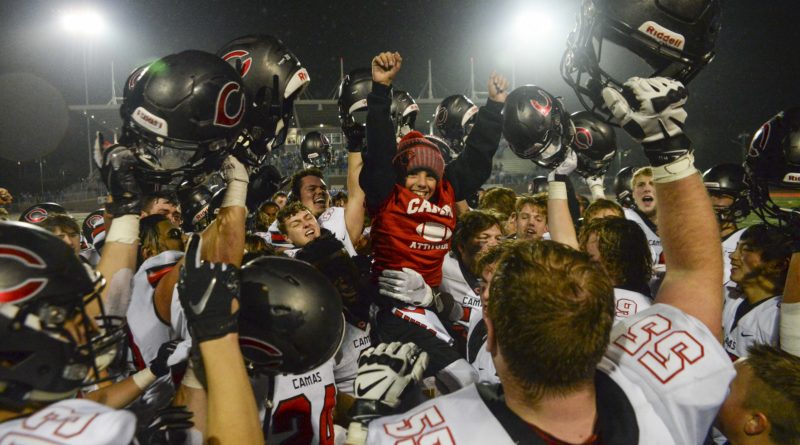 TACOMA — Camas dubbed the 2019 season the ‘Revenge Tour,’ one which it would exact revenge on every team it lost to the year prior, with a state championship as the end goal.

Camas beat all five opponents it lost to a year ago, culminating with a 35-14 win over Bothell — the very team that ended the Papermakers’ season last year — in the 4A state championship at Mount Tahoma Stadium on Saturday evening.

But to many players across Camas’ roster this wasn’t a dream that began in July, August, or even after the season ended more than a year ago. Saturday’s win marked the end of a childhood goal.

Jacques Badolato-Birdsell got his burst back. Bothell found out the hard way.

When the playoffs began, Badolato-Birdsell was still working his way back from an ankle injury that hadn’t sidelined him for entire games, but vastly limited his ability.

His “burst,” as Camas coach Jon Eagle aptly calls it.

One of the stories of Camas’ postseason has been the junior running back, a three-star according to 247 Sports, returning to full health. Or at least, getting that extra “burst” back.

“He didn’t have that burst, he played with a hurt foot,” Eagle said. “He’s so tough. He’s getting healthy and his effectiveness just keeps getting better and better.”

That much was evident from the opening drive on Saturday. Badolato-Birdsell showed the lateral quickness of a sure-fire college running back and had the big-gain of the game with his 48-yard explosion midway through the second quarter.

Camas fueled by hot start. Was it years in the making?

Camas’ first trip to the state championship game isn’t talked about much by fans. That was 2013, when Chiawana scored two touchdowns in the final minute to win by one.

Is it fair to draw a direct link between that 2013 loss and a title game six years later? Perhaps not due to the amount of success achieved since then (including a 4A title in 2016). Quarterback Blake Ascuitto was in middle school at the time, and remembers sitting in the stands for that game.

“We didn’t want that,” Ascuitto said. “We wanted to finish them. Everyone on the sideline cheering, but still, ‘stay in the game, we know we’ve got to stop them.’ ”

The Papermakers wanted to leave no doubt. That much was clear from the opening kick, and as Camas proceeded to score the game’s first 21 points.

“All the doubts, it doesn’t matter now, we’re the best team in the state,” Ascuitto said.

Goal of a state championship set long before the season

Many of Camas’ 30 seniors grew up together in the rapidly growing city east of Vancouver.

Many of them went to school together growing up, played on the same Pop Warner teams as Camas achieved success at the statewide level under head coach Jon Eagle.

“We set this goal way before that. Pop Warner, [Clark County Youth Football], freshman year, we really said we have the team, we can do it,” Ascuitto said. “Ever since then we’ve been working as hard as we could, and that’s why it’s so great.”

Eagle expanded on that more, which illuminates the program continuity — from youth football up to high school — that Camas has built:

In the end, Camas just the bigger, better team

Oh, and they’re fast. And sound.

The Papermakers overwhelmed Bothell with both in the first half. Bothell coach Tom Bainter said neither can be simulated in preparation.

“There’s always an adjustment period at the beginning of a game when you play a team that has something special,” Bainter said. “Their line is special, their back is special, I’m really proud of the way our kids played, you’ve just got to tip your hat to that staff and that team, they work hard all year, they played good football tonight.”

Bothell scored with less than a minute left in the first half when Andrew Sirmon found Blake Bickhaus wide open from six yards out.

And the Cougars struck again on the first drive of the second half when Sirmon hit Jordyn Turner 39 yards for a touchdown (The 6-5 Turner was Sirmon’s favorite target. He had five catches for 100 yards).

But Camas responded with its own playmaking. Blake Ascuitto sent a ball sailing into the corner of the end zone to Jackson Clemmer, who brought down a how-did-he-do-that reception, which included pass interference by the defender.

Camas controlled the ball late in the game, too. Bothell got the ball back twice in the fourth quarter with opportunities to cut the deficit to a touchdown, but the Papermaker defense held firm.

If strength of schedule was measured as a metric at the high school level, Bothell’s could very likely be the toughest.

The Cougars played 4A No. 1 seed Kennedy Catholic, top 3A seed O’Dea and followed that up with a regular season in the vaunted 4A KingCo.

And they’d do it again.

“If you’re good you should play somebody better than you when it doesn’t count so your kids can see where the new bar is,” Bainter said.

Once in the playoffs? The No. 5 seed edged Kentwood, upset No. 3 Graham-Kapowsin and bested Woodinville en route to its first state championship appearance since it won it all in 2014.

Bothell players were slow to exit the locker room, but when the dust settles, Bainter knows they will look back proudly on the run.

“We were great this year, I’m proud of our guys,” Bainter. “It’s not the loss that makes you emotional, it’s the finality of it. Our kids loved each other and that’s the goal. You want to build a program where your kids care more about their teammates than themselves. And when you do that, special things happen.”