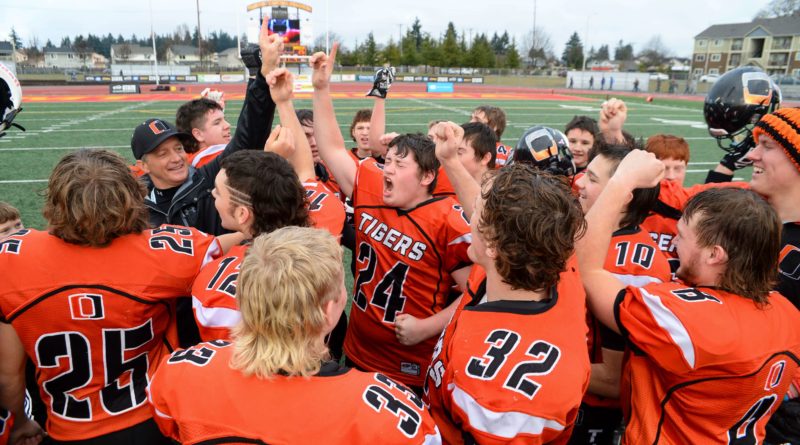 Take it from a man who has done it before.

Marcus King rushed for six touchdowns, broke three state championship records and led Odessa to an 80-26 win over Naselle to repeat as 1B state champions on Saturday at Mount Tahoma Stadium, cementing the Tigers as perhaps the most dominant 1B team in state history.

“It’s great to see, I wouldn’t have wanted it any other way, and truthfully,” Nelson said, “I knew it was coming.”

It was the first time in program history the team has repeated as state champions.

King’s 380 yards was the most gained by a single player in a 1B state title game, surpassing Lacrosse-Washtucna’s Nick Koller, who had 342 yards in 2002. (Odessa coach Jeff Nelson coached them both).

And King’s six touchdowns were the most ever in a 1B title game, edging Almira-Coulee-Hartline’s Tim Hunsaker’s previous record of five in 1990.

“It was important to stay focused to not let our community down,” King said, who didn’t pay any mind to records.

Oh, and King added four two-point conversions to his six touchdowns, which breaks the record for most points by a single player in the 1B state title with 44, surpassing Napavine’s Wayne Porter’s 40 points in 1976.

King should have had seven touchdowns, but slide just shy of the goal line in the fourth quarter. That deliberately set up Jett Nelson’s 23-yard field goal, which sailed comfortably through the uprights, became the first field goal made in a 1B state title game.

“One for the record book, that’s why we did it,” Jeff Nelson said.

Jett Nelson made his one previous attempt earlier in the season. Odessa broke the quarter scoring record last season with 40 points in the first quarter, and got a touchdown away from it again Saturday (32 points).

The two Odessa players are now two-time 1B state champions, which is is more than their fathers, Traig Weishaar and Dallas Deife, teammates on the 1993 team. Until 2018, the Tigers experienced a 25-year state championship drought after the ’93 win.

“They one-upped them,” Nelson said. “Good for them.”

More on the background there.

Only one 8-man coach has ever coached in the Earl Barden Classic, the annual East-vs.-West game each summer.

That’s Jeff Nelson, who has further cemented himself as not just the most accomplished coach in 1B, but among the Mt. Rushmore of active coaches across all classifications.

Nelson won his seventh state title on Saturday, second at Odessa. He won five state titles in seven seasons as the head coach at Lacrosse-Washtucna in the early 2000s.

And he has no plans to stop any time soon.

“It never gets old,” Nelson said. “It’s fabulous what it means for the community, these kids. You know, they work so hard. I don’t want to say we’re the hardest working team, but I can tell you nobody outworks us.”

Don’t look now, these Tigers may not be done with two.

The players know what that means: despite losing likely repeat 1B player of the year Marcus King, running back Josh Clark among others, they could very well make another deep run next season.

For much of Odessa’s season, the underclassmen saw the field due to lopsided results.

“[We’re getting the team ready for next year so they can come back and win it again,” running back Josh Clark said.

The Comets had a celebratory send-off at the local fire hall in Naselle on Friday night.

It underscored how widely this season was recognized and enjoyed by a town that hadn’t seen a state championship competitor in the history of WIAA records, which date back to 1973.

It’s understandably tough to appreciate that, and the team’s 12-0 season entering the final, as anything but a failure.

“We had a good season, they were just really well coached and they were better-conditioned,” Naselle linebacker Jimmy Strange, who had three TDs Saturday, said. “On defense we’re getting ready for the play and we’re already on the line ready to go.”

Strange was confident the Comets would be back next year.