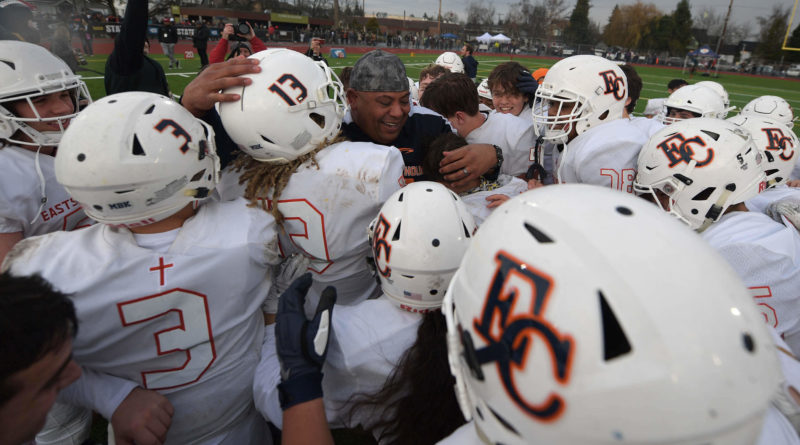 Last season, Eastside Catholic had all the answers in easily capturing the Class 3A state championship.

But a year later, the Crusaders instead had one big question – could they pull a victory out of the fire?

Ultimately, second-ranked Eastside Catholic had the biggest answer in a wild final few minutes, turning away No. 1 O’Dea, 20-12, on Saturday afternoon to repeat as state champions at Sparks Stadium in Puyallup.

Kobe Muasau passed for 228 yards and two touchdowns, including the game-winning 29-yard score to tight end J.T. Tuimoloau with 1:11 remaining.

Here are five takeaways from the Eastside Catholic-O’Dea game:

Eastside Catholic did not trail in last year’s Class 3A state title game – a 31-13 victory.

And the Crusaders did not face a deficit Saturday – until with 2:29 to go.

What did Scott and the offense do taking the field?

For starters, Scott gave his dad a little we’re-just-fine nod.

“I have trust and faith in my guys,” Scott said.

He started the series with an 18-yard completion to Sam Adams II. Then it was a 15-yarder to Scott as the Crusaders quickly got into O’Dea territory.

Two plays later, Muasau saw Tuimoloau in single coverage, and lofted a pass where only the big man could go get it. And he did for a 29-yard score.

SPEAKING OF THAT GO-AHEAD TOUCHDOWN, SHOULD IT HAVE COUNTED?

Tuimoloau will likely leave Eastside Catholic in 2021 as the top-rated recruit in the country at defensive end.

But since D.J. Rogers went down nearly six weeks ago, Tuimoloau took over the starting tight end spot – and at 6-foot-5, 275 pounds, he is a massive target in the middle of the field.

Which is probably why Muasau found him so easily for the score.

Tuimoloau juggled the ball as he was running into the end zone, then fell down. Television replays showed the nose of the football hitting the turf.

But Tuimoloau sold it quickly, hopping back up and showing everyone he had the football in his grasp as he was surrounded by jubilant teammates.

THE FINAL BIG-MAN TOUCHDOWN WAS A GIFT FROM ABOVE

The news hit the team hard. Daste admitted “the last two weeks, I think I have cried more than I have in the last 10 years.”

In the final minute Saturday, Taoipu sealed the deal for the Crusaders with his alert play chasing after Hopkins.

After Hopkins lost control of the football on a scramble, it landed right in the arms of Taoipu, who rumbled 23 yards for a touchdown with six seconds remaining.

The moment set off an emotional chain-reaction celebration as teammates mobbed the sophomore.

“For anybody to tell me his mom wasn’t looking over him on that would be crazy,” Daste said. “It was a great deal for him to score that touchdown.”

O’DEA DID EVERYTHING BUT WIN ITS FIFTH 3A CHAMPIONSHIP

It was an uphill battle for the Irish all Saturday afternoon.

For starters, the offense was without starting running back Cameron Daniels, who suffered a season-ending knee injury at the outset of the playoffs. Without him, the veer offense had no real speed threat to do damage on the perimeter.

But slowly, the Irish began wearing down the Eastside Catholic defense midway through the fourth quarter, finally scoring on K-son Mika’s 4-yard touchdown run with 5:44 to go.

“It was a tough fight,” Mika said. “But we knew we had a chance to get them.”

And then came the game’s jaw-dropper – Hopkins’ 96-yard pass to Mathers along the left sideline.

“We designed that play right before to get me one-on-one (coverage) with him,” Mathers said. “I know I can make some plays.”

Unfortunately for the Irish, the Crusaders made some, too.

THEY MIGHT NOT ADMIT IT MUCH, BUT THE CRUSADERS HOLD O’DEA IN HIGH ESTEEM

Maybe it is because they are in the Metro League together, or played in last year’s state championship game against each other – this rivalry is as intense as any in the state.

“I knew it was intense,” Daste said. “I knew we would always get their best shot – and obviously that was the case both times (this season). They are a really good team. I have a tremendous respect for Monte (Kohler, O’Dea coach) and how he conducts himself, how his team conducts itself and how hard they play every single snap.

“For us to get this win against them is a big-time deal.”