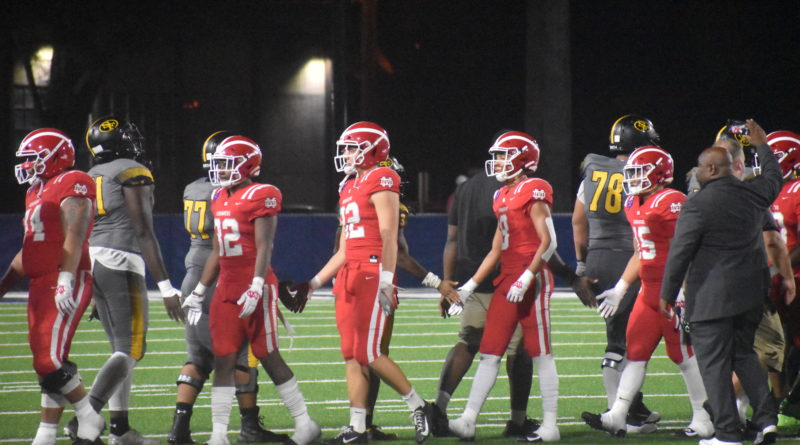 ROYAL CITY – As the bitter early-December evening chill hits, the only two bundled-up things outdoors are tarp-covered bales of hay, and teenagers running around in the local football stadium.

Up on the “Royal Slope,” the state’s premier Class 1A high school program tackles the business at hand – preparing for Lynden Christian as its title-game opponent.

A victory Saturday afternoon in Lakewood would not only put a stamp on another decade-long run of dominance, it also begs the question.

Across the board, the numbers are staggering: The Knights have won 113 games this decade, second-most to Bellevue’s 117. Their 37 shutout victories are tops by a wide margin.

In the WIAA playoffs, they have won a state-best 24 games – ahead of Lynden’s 22, and Napavine’s 21. This will be their fifth trip to the 1A championship game, highlighted by three consecutive titles from 2015-17.

Oh yeah, they once held the nation’s longest winning streak at 53 games in a row.

“It’s amazing,” said Royal wide receiver Tyler Allred, whose great-uncle, Wiley, is the longtime coach. “It is a tribute to the coaches and the culture. Everyone cares about winning, and this is the level you are expected to perform at as a player.”

Royal High School had has four football coaches in its history. None have been better than WIAA hall-of-famer Wiley Allred, who currently has the state’s best all-time coaching winning percentage (242-27, .900 winning percentage).

Allred played for late legendary coach Bob Nielsen, who won 179 games in his 26 seasons at the helm, before graduating in 1978. He went off to Walla Walla Community College as a defensive back for two seasons before transferring to Washington State University to finish up a degree in agriculture.

He returned to Royal City for one primary purpose – taking over the family farming business.

Allred did join Nielsen’s staff as a defensive coordinator, and was on the sideline with the Knights captured their first state championship in 1996.

In 1999, Nielsen retired – and Allred was hired as his replacement.

“I wanted to keep it going,” Allred said, “but make it different.”

So, over the past 20-something years, Allred has balanced two lifestyles: Operating a multi-million dollar farming corporation that employs up to 130 people around harvest time (and also a local country store called “Potholes”), and overseeing arguably the best small-school football program in the state.

In a nutshell, what makes Allred such an effective leader? He has an uncanny way connecting with people.

“When he walks around town, everyone knows who he is,” Tyler Allred said.. “And by now, a lot of people have played football for him, and then have come back. The impact he has made on a lot of people’s lives is pretty crazy.”

Allred seems to always be a half-step ahead of the curve. He founded the town’s “Grid Kids” youth program in the early 2000s, which has served as a talent pipeline to the high school.

But he also knows the type of multi-activity teenagers who come through his program. Many of them also farm, or work in orchards, so he scales back on football-related mandates, especially in the offseason.

Of course, it helps greatly when a school is able to produce so much elite talent at the quarterback position.

A few of them have proven to be valuable role models for the next great Knights’ signal caller – junior Caleb Christensen.

“They made me want to play quarterback,” Christensen said. “Just being able to watch Kaden when I was younger was the coolest thing.”

One of the remarkable things about this Royal group is what it has accomplished with so little varsity experience.

Only a handful of starters, including running back Lorenzo Myrick, defensive lineman Michael Perez and Allred, returned from last year’s senior-dominated squad that was upset by Colville in the 1A semifinals, ending the team’s 53-game winning streak.

Essentially, most of the team that started the 2019 season opener against Ellensburg were junior-varsity players from a year ago.

And yet, you could make an argument that this is as dominant a Knights’ team as Allred has ever had.

“This new group just didn’t know any better, so they went to work,” Allred said. “They were not varsity kids a year ago. But now I look at the film, they are not the same kids.”

The Knights have one more team in their path for a ninth career state championship – Lynden Christian.

“This season means a lot to everybody as another statement for Royal football,” Myrick said.