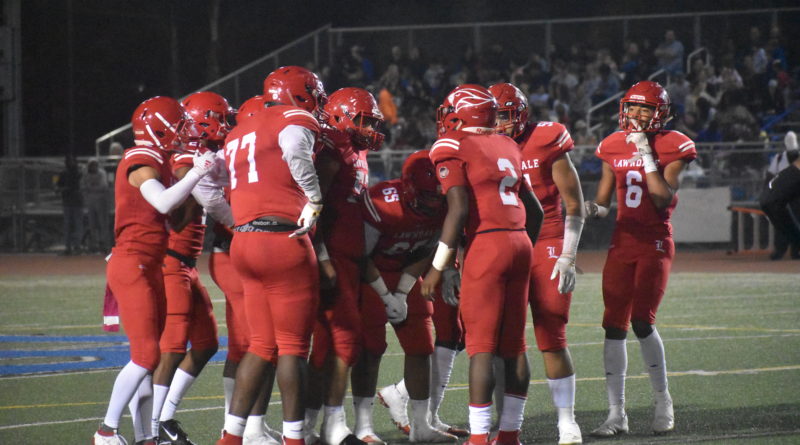 Call it what you want – a blip, a lackluster midseason multi-week stretch – but whatever was affecting the Eastside Catholic Crusaders, it has long since passed.

They are now eager to defend their Class 3A state championship.

And they are one step away, courtesy of a 34-21 victory over Lincoln of Tacoma in the WIAA state semifinals Saturday afternoon at Sammamish High School.

Second-seeded Eastside Catholic now has a chance to do something only Bellevue has done in the Class 3A ranks – successfully defend its state title on two separate occasions.

“We are starting to play some of our best football,” first-year Crusaders coach Dominic Daste said.

Here are five takeaways from the No. 2 Eastside Catholic-No. 3 Lincoln game:

No wonder the star-power glare could somehow throw shade on somebody like Ursino.

On virtually any other squad, the 5-foot-9, 180-pounder would be a front-line name.

On Saturday, he was the biggest name, in terms of production – 118 rushing yards on 14 carries with a touchdown, and 74 receiving yards on four receptions with another score.

He busted up the middle for a 51-yard touchdown run on the Crusaders’ opening series of the second half.

And on their next drive, quarterback Kobe Muasau spotted him streaking along the left seam, and delivered a perfect strike for a 30-yard scoring connection – and 28-7 Eastside Catholic lead with 6:01 remaining in the third quarter.

“Honestly I cannot give you a breakdown (of those runs) because it is instinct,” Ursino said. “I always rewatch my runs because I don’t remember them. It is all adrenaline.”

Ursino had 133 of the team’s 238 total yards after halftime.

THE HYPE WAS JUSTIFIED WITH THESE TWO HEAVYWEIGHTS

The level of physicality shown by the Crusaders and Abes wast not for the faint at heart.

On a couple of catches. Tuimoloau dragged three of four Lincoln defenders. Scott (four catches at wide receiver, two interceptions at defensive back) went up over receivers and cornerbacks at will.

For Lincoln, Julien Simon had one of the longest-yardage stiff-arms you will ever see (it was so soul-killing, he was called for a personal foul penalty). And Abner Sio bulled over bigger defenders all game long.

“When it came to the physicality of the sport, (the Abes) brought it,” Scott said. “But what this came down to was our mission and technique, and fortunately we came out with the win.”

UH-OH, TUIMOLOAU IS JUST AS SCARY A FOOTBALL PROPOSITION AT TIGHT END

When it is all said and done next year, Tuimoloau very well could end up as the top-ranked recruit nationally at defensive end.

But when the Crusaders lost talented tight end D.J. Rogers to a season-ending knee injury against Blanchet, the team suddenly had a glaring hole in its passing attack.

“I have a 7-on-7 background, so coaches chose me to go both ways, and left it up to me to get into shape,” Tuimoloau said.

Tuimoloau scored Eastside Catholic’s first touchdown on a 10-yard catch, then opened the team’s second series with a 38-yard reception – dragging all of those Abes with him. He finished with a team-high five catches for 73 yards.

IN THE END, WHAT SEPARATED THE CRUSADERS FROM LINCOLN? EXPERIENCE AND A FEW BIG-CHUNK PLAYS

The last thing the Abes wanted was to get down 14-0 early in the game.

But Eastside Catholic had an early run of big-chunk plays – three plays of 30 yards or more in their first six snaps – to score two touchdowns in the first 6 1/2 minutes.

“Obviously we did’t want to start the game off like that,” Lincoln’s Julien Simon said. “We had to play catch-up the whole game.”

Eventually the Abes settled down, cutting it to 14-7 – and thwarting a Crusaders’ scoring drive on a Simon interception late in the first half.

But Ursino’s two quick-strike scores to start the second half buried the Abes.

“They didi a great job coaching, too. They made some plays,” Lincoln coach Masaki Matsumoto said. “Like I said, I did not put the kids in the best situation a couple of times, and we paid for it.”

One thing can be said for the Abes – they did not stray from their game plan, rushing 52 times for 222 yards. Sio led all running backs with 145 rushing yards on 31 carries with a touchdown.

ROUGH WEEK ENDS IN CELEBRATION FOR THE CRUSADERS

Daste could take one big sigh of relief afterward.

His team survived a very good Lincoln team – and also a traumatic week of events.

Two players had family members die, including Peter Taoipu’s mother, who passed away on Thanksgiving Day.

Even offensive coordinator Drew Miller had his struggles: He passed a kidney stone.

“And those things were about one-third of it,” Daste said. “To see our guys come together, and love each other like that was special.”