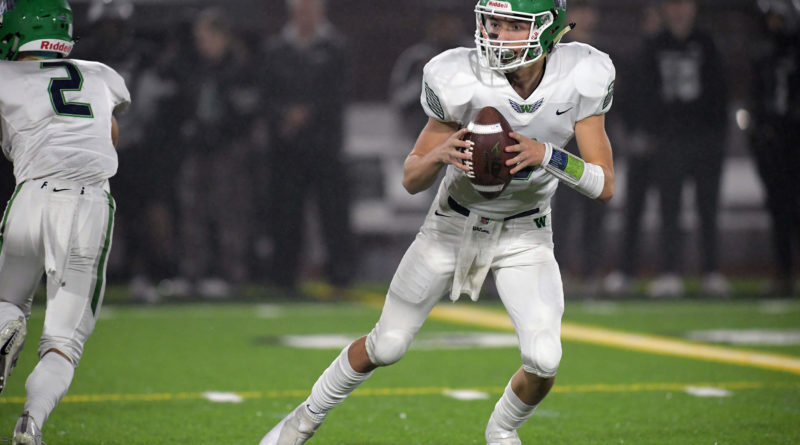 Don’t let longtime coach Wayne Maxwell fool you – he has honed in on a specific way how to handle football business at Woodinville High School.

He isn’t a fan of talk, or flash or even loud noise.

But he does like winning, especially when the odds against his squad are seemingly stacked high.

And on Saturday, his Falcons showed Kennedy Catholic the earliest exit for a No. 1 seed in state playoff history with a 55-42 victory in the Class 4A quarterfinals at Renton Memorial Stadium.

Here are five takeaways from the Woodinville-Kennedy Catholic game:

WHICH WAS MORE UNDESERVED – KENNEDY CATHOLIC BEING A NO. 1 SEED OR WOODINVILLE BEING A NO. 8?

For what the Lancers accomplished in the regular season, rolling through the 4A NPSL, and registering big non-league victories over a pair of quarterfinalists (Bothell in 4A, Bethel in 3A), they were certainly deserving of one of the state tournament’s top seeds.

And the seeding committee took all of that into consideration before planing the Falcons – the 2017 state runner-up, and a 4A semifinalist last season – on the 8-line.

It was pretty evident Saturday night – they should have been higher than a No. 8 seed.

“Our seniors have played a lot of playoff football games,” Maxwell said. “This is what, their second state playoff game? We felt very comfortable coming out here and competing.”

DIGGING OUT OF A 28-0 HOLE IS JUST TOO MUCH TO ASK AGAINST ANY QUALITY TEAM, MUCH LESS WOODINVILLE

The Falcons could not have gotten off to a better start.

They scored on their first possession – Noah Stifle’s 21-yard touchdown to Carter Smith.

They scored on Kennedy Catholic’s first possession – defensive back Joshua Spencer picked off quarterback Sam Huard in the middle of the field, and returning the interception 87 yards for a touchdown.

And they scored touchdowns on their next two possessions – on Stifle’s 3-yard run, and 16-yard pass to running back Joey Johnson – to grab a 28-0 lead after the first play of the second quarter.

“We felt good that we were going to score points tonight,” Maxwell said.

From that point on, the Lancers were playing catch-up – and just couldn’t get enough stops on defense to put a scare into Woodinville.

We did not get one of those things we kind of needed for a comeback,” Kennedy Catholic coach Sheldon Cross said. “We got a (first-half) turnover, but we needed one in the second half. They did a good job – they are a good football team that knows how to finish.”

Before Saturday night, the much-improved Kennedy Catholic defense allowed one team to rush for more than 100 yards – Kentwood.

But Johnson (game-high 185 rushing yards) and the Falcons (289 total) made it look easy just going up the middle.

At one point in the second half, the Falcons called 26 consecutive run plays, totaling 182 yards.

Maxwell said when he studied the Lancers on film leading up to the matchups, he instantly thought his offense could exploit some things in the run game.

“That is kind of who we are,” Maxwell said. “We have a great (offensive line). We have a heck of a running back. We have an athletic quarterback. We just kept doing what we did – and did it well tonight.”

ONE QUARTERBACK WAS NEAR-PERFECT, AND IT WAS THE GUY IN GREEN

Even after some of Woodinville’s early-season struggles on offense, Maxwell said he was pleased with Stifle’s progress as a dual-threat quarterback – and noted he was trending toward a true breakout game.

The senior completed 11 of 19 passes for 183 yards and three touchdowns, and added 60 rushing yards and a pair of scores.

If the Lancers were going to stage a comeback, it all went out the window on the first play of the fourth quarter.

Stifle faked a handoff to Johnson, and darted left into the clear, sprinting past everyone on a 31-yard touchdown run for a 55-27 Falcons lead.

“That is all credit to Joey,” Stifle said. “The defense had to do something to stop him, and I had my opportunities and took advantage of them.”

“He is a heck of an athlete – and an even bigger competitor,” Maxwell said. “If he gets overshadowed … he doesn’t care. He is a kid that loves football. He loves his team.”

HAS MAXWELL BUILT THE BEST THING GOING IN THE 4A RANKS?

It took a while, but Maxwell – a former Central Washington University safety – has it rolling at Woodinville.

And even though Huard threw for 407 yards and three touchdowns, nothing was easy for the Lancers’ offense. Maxwell is as good as there is in the state in devising a sound, methodical defensive scheme – and game plan.

And look at the list of teams his Falcons have defeated in the state playoffs the past two-plus seasons: Kentwood, Graham-Kapowsin, Sumner, Skyview (twice), Gonzaga Prep and now Kennedy Catholic.

“They are a great program, and I think they can probably win the whole thing,” Cross said.