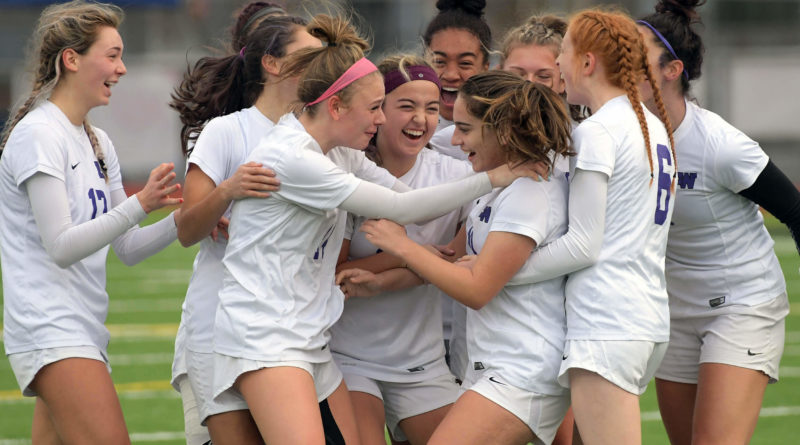 PUYALLUP – Lake Washington High School girls soccer coach Ashton Staudacher had waited so long to be able to pose with her team at the end of November, a state championship trophy in hand, and utter these words:

“You guys want to throw up the 1s or what?” she asked.

Immediately her players began hooting and hollering, holding up their index fingers for pictures as they celebrated their first girls soccer title in school history.

And Lake Washington had to do so against a familiar opponent, beating Bellevue, 3-1, just weeks after holding off the Wolverines in the 3A/2A KingCo championship match. It was the Kangaroos’ third consecutive win over Bellevue after an early-season loss.

“This one, obviously the pressure was a lot more intense,” said Lake Washington’s senior forward Jen Estes, a Princeton commit who scored her 20th goal of the season in the first half of Saturday’s afternoon championship at Sparks Stadium.

“But we just had to battle and give everything today – which we did.”

Lake Washington (18-1-1) spent much of the match on the offensive, with Bellevue out several of its key players to injury, including New Mexico commit Paige Satterlee. The Kangs had nine shots on goal to Bellevue’s two for the match.

Abby Nikfard gave Lake Washington a lead it would never give back with her goal in the 22nd minute, and Estes pushed the lead to 2-0 with four minutes remaining in the first half when she struck her shot from about 40 yards out just over the arms of Bellevue’s outstretched keeper.

Ari Issa hounded Bellevue’s attacks most of the match, so it was fitting the junior defender would put the nail in Bellevue’s coffin on her strike to the corner of the right post in the 63rd minute, giving Lake Washington a 3-0 lead.

Bellevue’s first shot on goal of the second half led to its only goal when Audrey Miller struck in a shot from in front of the net, but by that point Lake Washington’s lead was too large.

And when the final whistle blew, Lake Washington celebrated like it never has.

“They bought in and played like a family. I wanted this for them so badly. I knew they could do it and it’s a cool thing to see them reach their potential. It’s pretty emotional.”

Lake Washington hadn’t even qualified for the state playoffs since the 2014 season, when it lost to Mt. Spokane in the first round.

And its first loss of this season actually came against this same Bellevue squad, 1-0, on Sept. 19 to send the Kangs to 1-1-1.

They wouldn’t lose again, including wins over Bellevue on Oct. 15 and in the 3A/2A KingCo championship match, 1-0.

“It’s hard to beat a team multiple times in the same season,” Staudacher said. “And Bellevue is a great team and they’re pushed by a phenomenal coach and they had a great game plan. They took the first win and we kind of took that as we don’t want that feeling every again.

“It think it was actually a really good thing that that happened.”

Estes, the senior forward with red pig tails who finished this season with 20 goals and 16 assists, said the thing she hopes people remember this Lake Washington team for is their togetherness.

“I think we had a true buy-in mentality,” Estes said. “Every player on our team – it didn’t matter if we were playing zero minutes or 80 minutes, everyone was bought in and that makes it that much more special.”