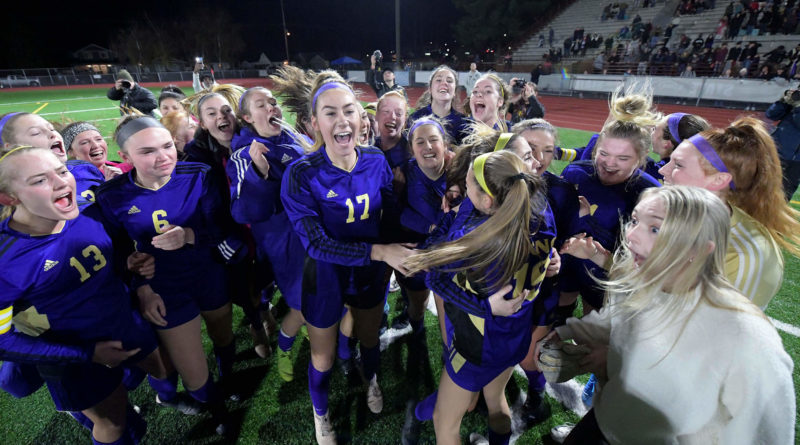 PUYALLUP – Sydney Evans was freaking out, by her own admission.

It’s not often you hear that of a player of her caliber, the leader of this Puyallup High School girls soccer team. But her eyes lit up when in the final seconds of the biggest high school soccer match of her life, Meredith Udovich had fought through three defenders for the ball near the net and crossed it to her in front of the goal.

“Oh my gosh, it was so nerve-wracking,” Evans said. “I sent it to the post and I took a deep breath and then it so slowly went in.”

All she could think of was to leap into Udovich’s arms.

Moments later the final whistle blew, and that was how the Vikings won their first state championship in school history, beating Auburn Riverside, 2-1, on Evans’ game-winning goal in stoppage time on Saturday at their homefield at Sparks Stadium.

What ensued was a collapsing pile of purple-clad players on the far sideline celebrating a championship that they thought was a long, long time coming.

Puyallup’s curse can finally be spoken about aloud.

Puyallup’s won plenty of South Puget Sound League titles under coach Matt White and this was the Vikings’ eighth state tournament appearance since 2010. But the program’s state record, dating back to its first appearance in 1990, was 3-12 and Puyallup had never before made it past the quarterfinal round.

White also coaches the school’s boys soccer team, which had a similar resume until winning its first title this past spring.

For White, this is validation.

“For years I got the ‘You’re always in it but you can’t win it,’” White said. “Always. And I’m just like, you know, people who say stuff like that have no idea how hard this job is. You just keep trying. There are so many kids who have committed to this program and done stuff and done great things here.

“But all the professionalism from everybody on our coaching staff, our players – this is not an accident. So the haters, it’s one of those things where you get folks who are jealous or don’t get what this job is. This is a hard job.”

One that has now paid off with two state-title trophies in one calendar year.

But it took a nail biter on Saturday.

Evans, who finishes the season with 22 goals and eight assists, found Kaelee Huetten in the 35th minute from about eight yards out to give Puyallup a 1-0 lead.

The Vikings were relentless offensively, outshooting Auburn Riverside, which had never before won a state tournament match before this season, much less reach a state championship match, 15-8 for the match. Though it felt like the difference was much greater.

Auburn Riverside didn’t get its first shot on goal of the second half until the 59th minute. Emma Lane made it count, punching a shot in front of the goal into the back of the net off a scrum from a corner kick.

White said they preach every year in his program to play for the next.

“They literally just gave up the goal and I looked at our bench,” White said, “And they were saying ‘Play for the next.’ And we just went right back at them.”

But it was certainly a momentum-turning goal for Auburn Riverside, which was also without their top playmaker, freshman Samiah Shell, who left for Florida on Friday morning to prepare for a national team camp. Shell entered the match with 17 goals and 27 assists for the season.

Puyallup went right back on the offensively, getting shots on goal in the 74th minute on Elsa Bley’s shot just over the crossbar after multiple bodies were slammed to the turf in what was a physical match throughout. Then Evans got a header on a throw in that deflected off the top crossbar and over in the 77th minute. Evans’ shot a minute later off a corner kick went wide.

But then Udovich hustled to that ball in the final seconds and Evans did the rest for state-title bliss, with Evans planting a Puyallup purple flag at the 50-yard line afterward.

“I’m just so happy,” Evans said, laughing. “So blessed. We worked for this all year. We worked so hard.”

“You know, it was just all about grit and we just play for the next,” Udovich said. “You don’t stop, even if it’s the last few seconds and you just try to find that open girl. And she hit it right in the net. It was awesome.”