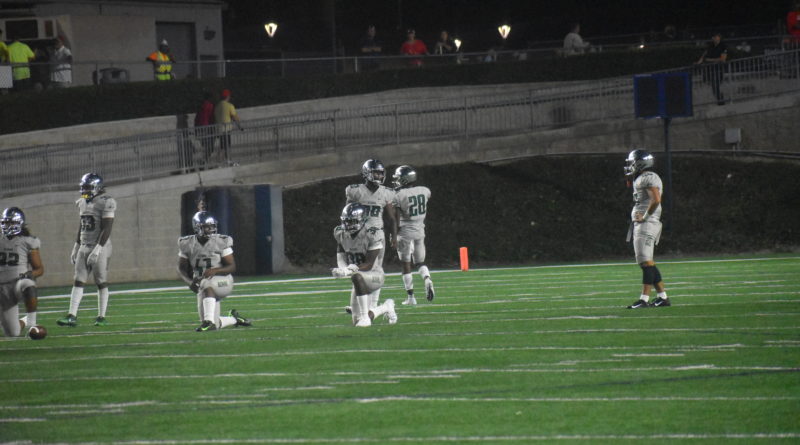 There seems to be a state football semifinal party of newcomers in Pierce County this season.

Less than a day after Steilacoom clinched its first berth into the final four in Class 2A – the third-seeded Lincoln High School Abes did the same thing Saturday afternoon.

Caden Filer threw for 290 yards and four touchdowns, and the Abes pulled away from 3A Wesco champion Marysville-Pilchuck, 56-21, at Lincoln Bowl in Tacoma.

Junior Julien Simon caught three of Filer’s touchdown passes in the first half, and the Lincoln defense forced three turnovers against the sixth-seeded Tomahawks.

“We are doing what Lincoln has never done,” Abes defensive back Jeddiah Hayes said. “We are setting history.”

Here are five takeaways from the Lincoln-Marysville-Pilchuck game:

In the first half of the season, the Abes did what they normally do – spread defenses out in the Air Raid and throw the ball all over the lot with Filer.

But in the past month, they have gone to something completely different – a full-house (the Abes just call it “House”) backfield.

It is a matchup nightmare, and the Tomahawks decided to bring in heavy sets early to try and slow down the Lincoln power rushing attack, led by Sio and Simon.

So, Filer came out firing, throwing for 210 yards and all four of his scores in the first half as the Abes built a 42-21 lead.

“It is a cat and mouse now,” Filer said. “They are a good team, and clogged some holes early. But if you want to put everyone in the box, we can do what we’ve done the last two years.”

Lincoln coach Masaki Matsumoto likes to joke with Simon, his do-everything junior, about his “4.9 40” speed because he is such a hulking teenager (6-2, 215).

“He has that next gear,” Matsumoto said. “He really does.”

Simon said he was able to utilize a couple of double moves to get open in the right flat on all three of his receiving touchdowns (56, 49, 57 yards) in the first half.

All three scores came on intermediate routes that Simon outraced the coverage to the end zone.

“We knew they’d be in cover-3 (three-deep, four-underneath in zone coverage),” Simon said. “From there, we were just playing the game.”

IN A TALENTED-CAST SECONDARY, HAYES MADE THE PLAY OF THE GAME

The Abes have an abundance of riches in their secondary with Jaylen and Donovan Clark at cornerback, and Simon as a rover.

Hayes sometimes gets lost in the shuffle at safety, but he was certainly in the spotlight Saturday with his interception return for a touchdown.

On Jake Elwood’s tipped pass near midfield, the Lincoln senior grabbed the deflection and raced 56 yards for a touchdown – and 14-0 Abes lead just four minutes into the game.

“I saw (the deflection) go real high in the air, and coming straight for me,” Hayes said. “Hey, I do what I need to do. I don’t get caught up in any of the (attention). As long as I am going my job for the team, I am doing well.”

TOMAHAWKS QUICKLY MADE A GAME OF IT, ONLY TO SEE IT SLIP AWAY IN FINAL SECONDS OF FIRST HALF

After falling behind 21-0, Marysville-Pilchuck finally got untracked on two Jordan Justice touchdown runs in the span of 1:32.

And Elwood’s scoring scamper with less than two minutes remaining in the first half cut Lincoln’s lead to 28-21.

But Simon hauled in his third touchdown catch just 32 seconds later, forcing the Tomahawks to take a shot in the final 20 seconds, deep in their own end.

They missed, and were held on third down, prompting Lincoln to call a timeout with 15 seconds to go.

On fourth down, the Tomahawks’ punter field a low snap but went to a knee at the 15-yard line, giving the Abes an unexpected chance to score another touchdown right before the half – which they did on Filer’s strike to Jasiah Marshall-Snow in the back of the end zone with 6.1 seconds remaining to put Lincoln up, 42-21.

“Our kids battled and played hard, and we knew we had to play next to perfect to win this one,” Tomahawks coach Brandon Carson said. “We had to take some chances, and do some things. They are a really good football team.”

LINCOLN CARRYING THE TORCH FOR TACOMA

Now, they are the first metro school from Tacoma to reach the final four since Wilson went all the way to the 4A title game in 1998, losing to Pasco.

It was a seminole moment for this program. The players obviously appreciated it – and their coach by giving him the celebratory Gatorade ice-water bath.

“I love them,” said Matsamoto, tearing up in the moment.

“This community, these families, this school and these players deserve this. We told them, there is a lot of negative things that get labeled with Tacoma, especially on the East and South side … and that this is a chance to give ourselves and these people some hope.”