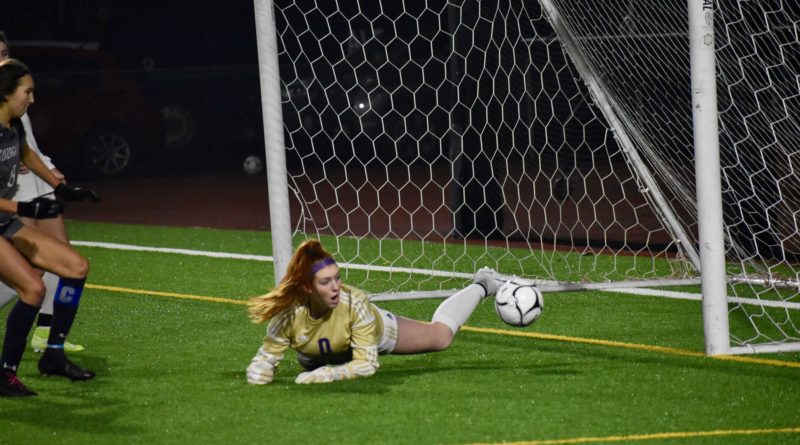 PUYALLUP — The key to winning a penalty kick shootout, according to Puyallup coach Matt White, is predicated on disguise.

Disguise your approach, your shot and keep a watchful eye to see if the goalkeeper jumps one way or another.

That was the gameplay instilled into the Vikings over the course of the season, and it was executed to perfection in an otherwise scoreless 4-1 PK win over Gonzaga Prep in the 4A state semifinals on Friday night.

Sophomore goalkeeper Ally Larkin saved two Bullpup penalty kicks to give the Vikings the edge after a grueling 80 minutes of regulation and two five minute overtimes at Sparks Stadium.

“I will just say we’ve done our homework, our keeper was ready and she stuffed them on their PKs,” White said. “They didn’t change anything.”

Added senior forward Sydney Evans: “We all look up to her for saving those goals. And she’s literally only a sophomore. It’s awesome.”

Though scoreless, the semifinal between two consistent playoff teams didn’t lack the spark reflective of the 0-0 scoreboard.

Puyallup created chances in the first half and pushed the Bullpups on their heels defensively early on. Prep, led by sisters Chelsea Le and Kyah Le, was then able to put pressure on the Vikings in the second half.

Around the 60th minute, Larkin saw a shot bounce off her chest and slowly pass in front of the goal toward the goal line. Chelsea Le attempted to pull the ball back across her body and get a shot off with two Puyallup defenders vulnerable and collapsing, but the ball was eventually cleared.

In the final minutes of regulation, Puyallup saw a shot bounce off the left post.

The cadence of overtime proved similar.

“Overtime is just a battle, it doesn’t matter who you are, it’s a battle,” White said.

Puyallup advances to the 4A state championship and plays Auburn Riverside on Saturday at 4 p.m. at Sparks Stadium — its home field.

Gonzaga Prep plays Inglemoor in the third place game at noon on the same field.