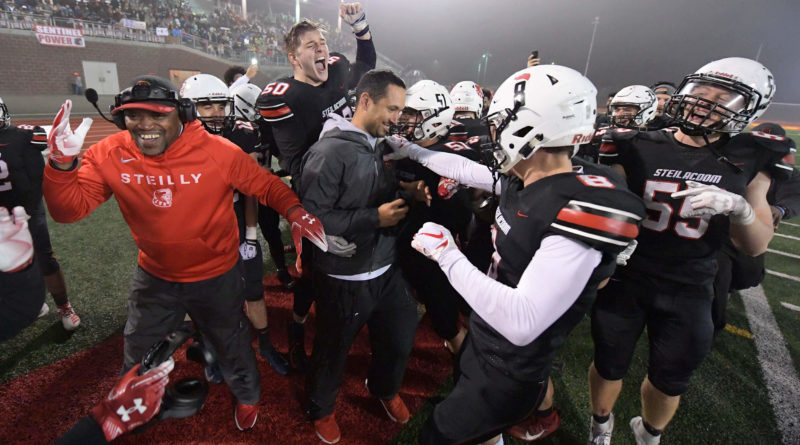 All Steilacoom High School quarterback Chance McDonald could do was stand back and soak it in.

Euphoria reigned everywhere on the Sentinels’ sideline at Mount Tahoma Stadium as coaches and players alike embraced as if the biggest weight in the world had finally been lifted.

It had. The Sentinels reached the state semifinals for the first time in school history with a 48-15 victory Friday night over Prosser in foggy Tacoma.

McDonald threw for 167 yards and two touchdowns. But it was Steilacoom’s run game that carried the day, led by Rasun Williams’ career-high 225 yards.

Second-seeded Steilacoom was the first 11-man program in the state to sew up a semifinal berth in these playoffs.

“It is one of the greatest feelings I have experienced seeing my guys this happy,” McDonald said.

Here are five takeaways from the Steilacoom-Prosser game:

One fan said it all shouting from the grandstands after the game.

“The curse is over,” she said.

From 1983 until last season, the Sentinels played in the state quarterfinals nine times. They were 0-9.

Last season, they lost to eventual repeat 2A champion Hockinson, 35-28, on the road.

“We knew this was the barrier,” Steilacoom coach Colby Davies said. “We’ve been in this situation … so we knew how big this game was. To win a state title, or compete for one, we had to get through this week.”

A THUNDEROUS DEBUT BY A NEWCOMER

Last season, Williams was part of a Sumner squad that shockingly missed the postseason.

He was expecting to return for his senior season, but when the Williams’ family house burned down, he ended up moving to Steilacoom to live with other family.

“They all welcomed me in,” Williams said. “It is a brotherhood.”

Williams had a night to remember, rushing for 225 yards on 27 carries. He scored on a 6-yard run in the second half.

D.J. Fryar added 47 yards and a pair of scores as well. Both guys are power running backs.

“It’s not really a thunder and lightning thing,” Davies said. “It is a lot of thunder.”

OH YEAH, THEY CAN PLAY DEFENSE IN STEILACOOM, TOO

Much like the Sentinels, Prosser – the 2A CWAC champion – likes to pick on a defense in space in its spread offense.

The Sentinels were the ones dictating the action, playing the Mustangs’ wide receivers up close in press coverage, forcing sophomore quarterback Kaiden Rivera to make throws in tight windows.

Means made the biggest play midway through the second quarter. He plucked the football out of the hands of a receiver, and returned it 52 yards down the left sideline for a touchdown – and 21-0 Sentinels’ lead at the 7:19 mark.

EGBUKA CAN WRECK A DEFENSE, NO MATTER THE DISTANCE

One of the things Steilacoom took from its season-ending loss to Hockinson last season was the impact of an effective “Wildcat” runner (the Hawks rode Sawyer Racanelli in that formation to the 2A title).

Egbuka converted a fourth-and-short on Steilacoom’s first drive that led to his own 6-yard touchdown run.

Two drives later, the Sentinels faced a third-and-short, and Egbuka ripped off a 9-yard run.

“It can be really effective for us – and was,” Davies said.

Of course, Egbuka’s highlight came on a second-and-22 play near the end of the first half. He took a short pass in the right flat and outraced three Prosser defenders to the end zone on a 51-yard scoring play.

“Emeka is going to get open every once in a while, even if they are doubling him,” McDonald said. “He is a great athlete.”

DON’T WORRY, PROSSER FANS – YOU HAVE A KEEPER IN RIVERA

He completed passes to eight different wide receivers. And he led the Mustangs on an impressive drive (75 yards in final 2:14) for their first touchdown.

It came on a fourth-and-2 play where Rivera showed great patience in the pocket, waiting for Anthony Kernan to flash in the middle of the field. And he delivered a strike in the end zone for a 21-yard score with 17.2 seconds remaining.

“He kept fighting, kept grinding and making throws. There was not a lot there,” Prosser coach Corey Ingvalson said. “We are excited about his future.

“But it was incredibly tough. That is a physical team, and a fast team. They are well-coached. Credit to those guys, they are the best team we’ve seen all year obviously.”