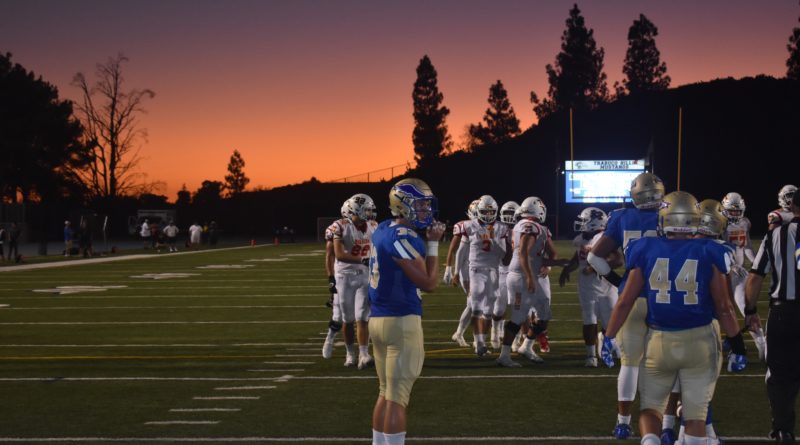 They are so long gone.

And because of it, the Wolverines are primed to make a long stay in the Class 3A state playoffs.

The Wolverines’ vaunted Wing-T offense rolled up 234 rushing yards, led by Alex Reid’s 136 yards and two touchdowns, and sixth-ranked Bellevue won its 16th consecutive state-playoff opener with a 31-14 victory over No. 9 Lakes on Friday night.

The Wolverines are the No. 7 seed in the tournament; Lakes was the No. 10 seed.

Here are five takeaways from the No. 6-Bellevue-No. 9 Lakes game:

With the victory Friday night at home, Bellevue has now extended its winning streak to seven games.

Two months ago, things were not all that cheery on “Wolverine Way.” The Wolverines had lost a bruising 24-7 game to Class 4A powerhouse Camas – just weeks after taking the same chin-busting loss to Central Valley, another 4A squad with bigger dudes.

“Those were not fun weeks,” Bellevue senior running back Joby Schneider said

Kneip and his staff thoroughly examined those two losses, eventually making a couple key personnel changes. They also preached over and over that the offense had to be much more precise it how it came off the ball – and the tempo had to increase as well.

“We needed to be faster,” Schneider said. “We came out slow in both of those games.”

“So when we do, we kind of have to disguise it,” Reid said. “What better way than to give it to the running back and let him throw it?”

Reid threw a halfback pass for a touchdown on Bellevue’s first series – a 30-yarder to tight end Josh Goates for a quick 7-0 Wolverines lead.

Not to be outdone, Schneider got in on the act. He completed a 29-yard pass of a fake punt to tight end Tim Underwood, setting up Nick Barros-Barreto’s 31-yard field goal to open the second half.

The Wolverines aren’t going to win many mass-possessions shootouts, and did not want to try Friday night against a good Lakes passing game.

Lancers coach Dave Miller knew it, too, telling his player this week in practice that “we have to score every time we have the ball” – because we weren’t getting it as much as usual.

Case in point: Bellevue did not have to score in the second quarter to be effective.

The drive ended on Jaedon Hall’s interception for Lakes in the end zone with 2:51 remaining in the first half. But the Lancers just didn’t have enough time to get a score before halftime as Justin Brennan’s heave from near midfield in the final seconds fell incomplete.

“That is the reason we run the offense,” Kneip said. “And the kids believe in our work, and believe in our system. … They take pride in (taking time off the clock).”

THE LANCERS’ DEFENSE DID ITS JOB, EXCEPT ON A FEW BIG PLAYS

For the most part – well, 57 percent of the time – Lakes put the clamps on Bellevue’s rushing attack.

On 26 of the Wolverines’ 46 rushing attempts, the Lancers held them to 3 yards or fewer on those plays.

But Lakes gave up the two long pass plays for touchdowns – and saw Reid break away on touchdown runs of 26 and 30 (on third and 10) yards in the final nine minutes.

“I thought we did a good job – we just let down on a few plays,” Miller said. “We made a lot of mistakes on offense … and really got away from our discipline.

Brennan completed 23 of 37 passes for 294 yards and two touchdown, but was picked off once and fumbled near the goal-line. He also accounted for 47 of the team’s 59 rushing yards.

Nobody around Bellevue has forgotten what happened last year.

Not only did Eastside Catholic demolish the Wolverines, 41-3, in the state semifinals, Kneip said the Crusaders rubbed it in their faces.

“Those guys don’t respect us at all,” Kneip said. “That came from their players and their coach (former coach Jeremy Thielbahr) to me last year.

“These two programs have history, and there is bad blood – end of story.”

Bellevue had three fumbles in the game last year, including one that was returned for a touchdown.

“We were disappointed in the result from last year,” Reid said. “We’ve been waiting. We get another shot at them.”