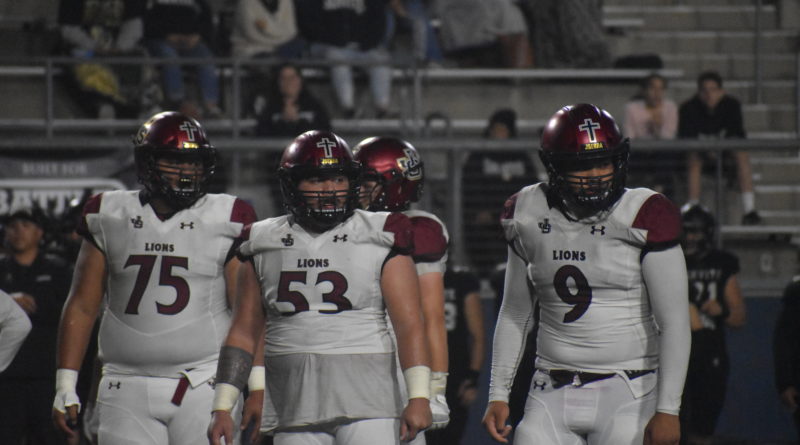 If you ask any Bethel High School defensive player, what developed Saturday night in the opening round of the Class 3A state playoffs is no surprise at all.

But what did Braves coach Mark Iddins expect facing an explosive Garfield squad?

Seventh-ranked Bethel shut out the Bulldogs, 21-0, at Art Crate Field to advance to the state quarterfinals for the first time since 2004.

The Braves, who are the No. 4 seed in the tournament, will host fifth-seeded Kennewick next Saturday in Spanaway.

Here are five takeaways from the No. 7 Bethel-Garfield game.

This core group had led the Braves to back-to-back 3A state playoff berths in 2017 (lost to Ferndale) and last year (lost to Peninsula), but they were bounced out of the tournament early.

But Bethel did not shy away from the moment Saturday night against a Garfield team who had scored 20 or more points against some of the best programs in the state – Central Valley, Bellevue and Eastside Catholic.

“This is the jump we needed to make,” Iddins said. “If we wanted to got the next level, this is it. Elite teams play in quarterfinals and semifinals. We feel we’ve got that group – and the mental makeup. We showed that tonight.”

WHO IS DAVAUNTAE HOLDEN, AND HOW DID HE PERFECTLY TIME THE GARFIELD SNAP COUNT?

The Braves are loaded with top-flight college talent, so Holden, a senior linebacker, sometimes gets lost in the shuffle.

But here’s a little-known fact: Holden was the team’s defensive player of the year last season.

And on Saturday, Holden more than doubled his season sack total by taking down Garfield’s Javon Tade four times in the first 20 minutes of the game, firing off the edge right when the ball was snapped.

“The pass rushers were picking it up pretty well, and doing a good job not jumping (offside),” Iddins said.

Holden also recovered a fumble for a turnover, and even caught an 11-yard pass at tight end.

“He is a (NCAA Division II) football player who gets no publicity because he is not one of the other guys,” Iddins said. “But he was our defensive MVP last year, so that should tell you something.”

WILL LATU PLAYS THE PART OF RUNNING BACK, BUT HE’S A BETTER WIDE RECEIVER

Whatever positives Bethel had moving the football in the first half was negated by a rash of penalties (14 penalties for 115 yards in the game).

But the Braves finally cashed in late in the first half with two Kekoa Visperas touchdown to Latu.

The Braves quickly got the ball back and drove to the Bulldogs’ 45 with 10 seconds remaining.

And Visperas found Latu streaking in the middle of the field, hitting him in stride at the 20-yard line.

With no timeouts, Bethel’s only chance to score was if Latu could bull his way past a tribe of Garfield defenders – which he did, finishing off the 45-yard scoring play with 5.7 seconds to go.

“I saw four or five guys,” said Latu, who now has seven touchdowns in two playoffs games this season. “I was just praying to God I would land in the end zone.”

Bulldogs coach Reggie Witherspoon had to be shaking his head walking to the locker room at halftime.

His team had gained just 10 yards.

So he switched out Tade (who also rolled his ankle) and put in backup quarterback Yumoni Howell, who is a better running threat.

And just like that, the Bulldogs began moving the ball at will, finishing the third quarter with 119 yards – most of them belonging to Nevada signee Avery Morrow (nine carries, 112 yards).

“I was looking for a spark,” Witherspoon said. “They were brining a lot of pressure, and I knew we could get (Howell) out of the pocket and do some things.”

Unfortunately, Garfield did not turn those yards into points – and turned the ball over three times in the second half.

He is an imposing figure in the middle of the Bethel defense.

And as Garfield threatened to cut into Bethel’s lead midway through the third quarter, Feo halted it with one big middle stunt.

The Bulldogs had the ball at the Bethel 5-yard line when Howell called for the snap standing in pistol formation.

Both the football and Feo got to the quarterback at the same time as the Braves junior caused a fumble, and the Braves recovered for a turnover at the 5:35 mark to preserve their 14-0 lead.

“We did not call a blitz, but I knew what they were running – and I had to make a play,” Feo said.