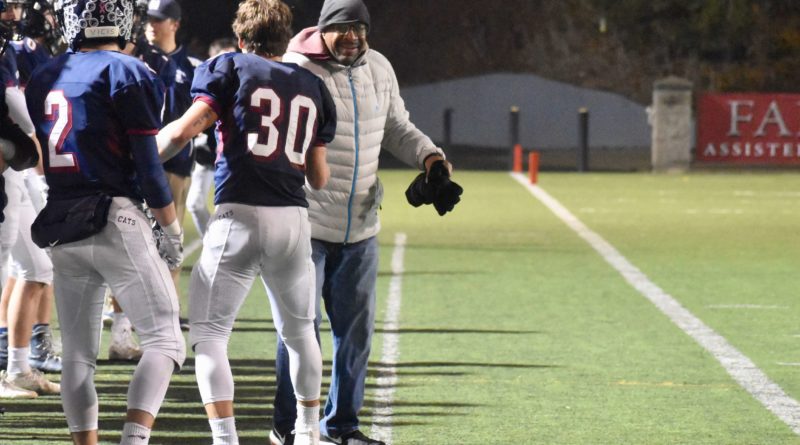 SPOKANE  — The last two years, the opening round ended in heartbreak. This time around?

Kannon Katzer ran for 307 yards and three touchdowns on 38 carries to lead 8-seed Mt. Spokane past 9-seed Peninsula in the first round of the 3A state football playoffs on Friday night at Joe Albi Stadium.

Katzer’s performance was a continuation of his mammoth senior season. The Wildcats advance to to play top-seeded O’Dea next Friday or Saturday in Seattle in the state quarterfinals.

This win is extra sweet for the Wildcats, considering the last two years

Last year it was a last second field goal at Timberline that bounced off of the upright crossbar and popped in to sink them by two.

In 2017, a late 14-point lead evaporated as Rainier Beach went on to win by a touchdown (and make a run to the 3A title game).

That’s why a comfortable win in the first round was welcome for a Mt. Spokane team that features many seniors who experience the last two early exits. A quarterfinal appearance marks the team’s furthest postseason run since 2014, when the Wildcats lost to Eastside Catholic in the state semifinals.

“We had a lot of injuries last year and couldn’t quite finish the game against Timberline, that’s part of the motivation,” Cloer said.

How to tackle Katzer, as explained by the opposing coach

Many of Katzer’s yards came after contact, and for many more, he was slippery enough that it didn’t take much for him to find space.

So how, technically, does a defense effectively slow Katzer, the 3A Greater St. Helens League offensive player of the year?

“Elusiveness and he’s got some strength,” You can get a hand on him, but you’ve got to tackle him with your body,” Peninsula Ross Filkins said. “He’s got a little bit of burst in him and his jump-cut will make you miss.”

To Katzer, and anyone who has watched Mt. Spokane throughout the year, Friday’s performance wasn’t much different from what he’s done all season. Katzer, who is uncommitted and trying to play his way into an offer, has video game-level stats to flaunt. He was 2,473 rushing yards on the season (206 per game) and 38 total touchdowns.

Many of Katzer’s carries were direct snaps in the wildcat formation, which has become more prevalent over the last four weeks when 5-foot-8 slot receiver Connor Maril moved over to quarterback with senior starter Jeter Schuerman sidelined with a school issue, and the Wildcats have leaned even more on the run.

Peninsula intercepted Mt. Spokane in the end zone on the first drive, then went down and kicked a field goal for the game’s first points.

He took the ensuing kickoff 92 yards to the 3-yard line and ran the next one in for touchdown.

Filkins said it was prepared for Katzer and all the ways the Mt. Spokane offense would get him the ball. In the end, the team didn’t execute, he said. There was just no response for Katzer.

He had three touchdowns all on short yardage punch-ins, but found space all night. His 51-yard run set up the final touchdown run of the game.

“We always talk about adversity and how we’re going to come back and answer that,” Katzer said. “The kick return was a great thing, I had great blocks up front, everyone just did their job and when that happens, things like (the return) happen.”

The Seahawks scored their first touchdown with 5:35 left to play on a run to the outside right by Sean Skladany.

That cut the game to a three-score Mt. Spokane lead, which only became noteworthy when Peninsula recovered the ensuing onside kick. On that drive, the Seahawks moved the ball with relative ease. Senior quarterback Peyton Bice found open receivers for several first downs.

“Our defense played well for three and a half quarters,” Cloer said. “Got away from us a little bit at the end.”

But luck ran out. After top target Chase Wittmers went down and had to be helped off the field with an apparent foot injury, Peninsula faced 4th and 9 inside the opposing 25, but Bice’s desperation heave under pressure was picked off by Jake Griffiths, who had two interceptions on the night.

Filkins said his team missed tackle throughout the game, but that shouldn’t diminish from the season the Seahawks had.

“We never had a bad practice,” Filkins said. They really achieved a lot from where we started and some of things we were able to do this season — undefeated league champion, getting back to the state playoffs.”

Mt. Spokane faces the tallest task next. Do the Wildcats have an upset in them?

No. 1 O’Dea issued a 35-0 first round shutout over No. 16 Kelso, setting up a Mt. Spokane road trip to Seattle next week and a tall task facing the top team in the state, with fellow run-heavy offense.

Does Mt. Spokane have what it takes to challenge an O’Dea that has few weaknesses and has hardly stumbled?

That remains to be seen. But one thing is for sure: the Wildcats won’t be celebrating this win for long. Film review begins on Saturday.

“We’re going to watch film on O’Dea and get ready to beat them (next) Friday,” Katzer said.