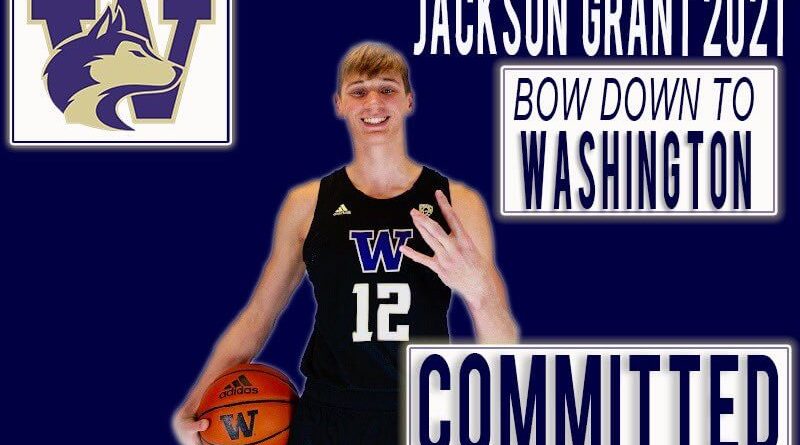 Jackson Grant remembers telling his mom early in the recruiting process that if the University of Washington offered, he’d waste no time committing.

But as his interest picked up, he decided to hear other big programs out. But in the end, a sense of assuredness on the heels of his official visit led him to announce his commitment to Washington on Saturday.

“Once I went on my official and saw how much I really fit in there with the coaching staff and everything, it felt right,” Grant said.

Grant, a 6-foot-9 four-star standout at Olympia High School, is University of Washington’s first commit from the class of 2021.

Grant called Huskies coach Mike Hopkins on Wednesday night to announce his commitment on the heels of his official visit to UW on Nov. 1 and 2. The Huskies offered him back in April after Hopkins saw him play at an Under Armor tournament in Kansas City, where he was playing with Washington Supreme.

Grant took official visits to Wisconsin and Stanford, too.

As a forward with size, length and the ability to stretch the floor, Grant said the Huskies see him as an integral part to their 2021 recruiting class.

“They don’t really have anyone like me right now,” Grant said.

Grant is looking forward to what looks to be a strong junior season for Olympia, which finished second in the 4A South Puget Sound League before being knocked out of the district playoffs by Battle Ground.

“Not that I was stressed about recruiting but it’s still nice to have it kind of out of the way and focus on high school season and school and all of that,” Grant said.