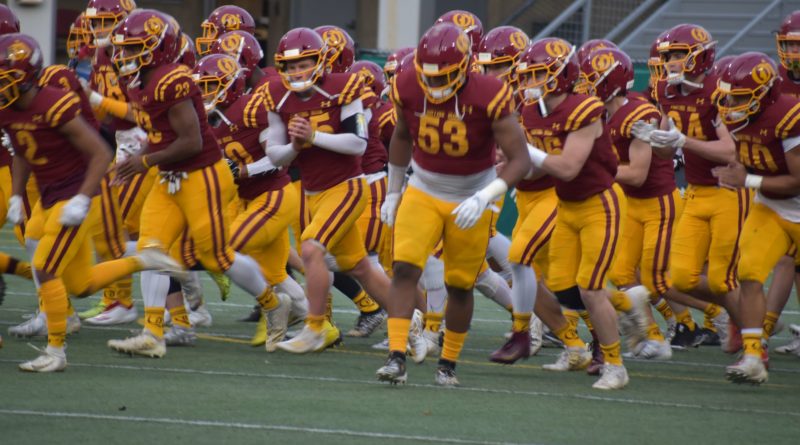 It never gets old making the big dance.

And the O’Dea Irish knows that feeling better than any high school program in the state of Washington.

The No. 1 Irish advanced to the 3A state playoffs for the 25th time in the past 26 seasons after handling Ferndale, 42-7, in a round-of-32 district matchup Friday night at Memorial Stadium in Seattle.

The Irish all but assured itself the No. 1 overall seed in the 3A playoffs with a convincing win.

Here are five takeaways from the No. 1 O’Dea-Ferndale game:

It has been a crazy season for the Irish, which came in with a whole new crew on both sides of the ball after losing 19 all-Metro League seniors from its state runner-up squad in 2018.

And after battling through a couple of close games with Bethel (27-14) and Bothell (29-23), the Irish pulled the season’s biggest stunner – a mauling 28-6 win over then-nationally-ranked Eastside Catholic in Sammamish.

Needless to say, the Irish needed to recharge its battery last week as the Metro’s top seed – and took advantage of that.

“Probably the biggest part of that was to get our minds back right – to get them fresh,” longtime O’Dea coach Monte Kohler said. “It is a long haul to do it all.”

One of those new pieces for Kohler was Hopkins, a 6-foot-5 junior who is in his first year as the starting quarterback.

Hopkins came into his first playoff start with respectable season numbers, having completed 35 of 58 passes for 466 yards and nine touchdowns with only two interceptions. He also rushed for 337 yards and seven touchdowns.

And even though Hopkins fumbled late in the first quarter Friday, he did converted a fourth-and-goal on a 2-yard touchdown run – then made the play that essentially put the game away.

Near midfield, the Golden Eagles decided to send pressure against Hopkins on second-and-long. And the Irish’s signal caller patiently waited for it to come before lofting a soft screen pass to Daniels near the left sideline.

Daniels darted through traffic a couple of times, turning the play into a 53-yard touchdown – and 21-0 Irish lead with 5:55 remaining in the first half.

“It’s confidence,” said Kohler when asked what he’s seen as the biggest improvement in his quarterback over the past few weeks. “You need that at the quarterback position. He’s done everything we’ve asked.”

Junior offensive guard Owen Prentice continued to show why he is one of the state’s most coveted run blockers in the class of 2021 by opening big holes for the Irish’s run game Friday.

But O’Dea has another good two-way starter – senior Cooper Mathers, who is a wide receiver and strong safety.

The Ferndale offense had its moments in the first half, totaling 141 yards and crossing midfield four times.

But it was Mathers who stopped the Golden Eagles in their tracks.

Trailing 7-0, and after recovering the Hopkins’ fumble at the Irish 43-yard line, Ferndale had a golden opportunity to go tie the ballgame.

But on third down, quarterback Haiden Rasmussen thought he had an open receiver in the right flat, and threw a pass in that direction. Mathers read it perfectly, picked it off and returned it 53 yards for a touchdown.

“(Mathers) is a stud,” Kohler said. “He’s played a lot of football, so he knows what to do. He does not make too many mistakes.”

THE GAME’S BEST MATCHUP WAS IN THE TRENCHES – FERNDALE’S GEIREAN HATCHETT VS. O’DEA’S JALEN DIXON

For much of the night, it was a big-man collision.

Ferndale offensive guard Geirean Hatchett certainly didn’t want his career to end a few miles down the road from where he will play college ball – at the University of Washington.

And on plenty of the Golden Eagles’ Wing-T run plays, Hatchett pulled right into the direction of Dixon, O’Dea’s talented defensive end.

“I knew he would pull at me all game. I tried to long-arm him so I could avoid him to make the play,” Dixon said. “I love it. It brings a better challenge to me, and makes me better in my game.”

Hatchett, who had battled a right shoulder injury all season, also recovered a fumble – and chased down O’Dea defensive back Hayden McDonald after an interception and knocked him out of bounds to close the first half.

In the fourth quarter, Hatchett also got a carry – and fumbled.

FERNDALE TIRED OF RUNNING INTO SAME 3A POWERHOUSES

Since 2012, the Golden Eagles have had their postseason run end all but once by three 3A powerhouses, Bellevue, Eastside Catholic and O’Dea.

Lately, they have seen a lot of the Irish, losing to Kohler’s team in three of the past four seasons, including Friday night.

Plenkovich has few talented underclassmen – notably running back Isaiah Carlson, a ninth grader; and Landen Hatchett, also a ninth grader (and younger brother of Geirean) – to build around for the future, but added after the loss Friday his young team had no business being on the same field with O’Dea.

“We are in a different boat. There have been years we’ve been good enough, but this is not one of them,” Plenkovich said.

He also suggested that the state look at having an “open division” state tournament involving the top private and public schools in Washington, much like what Arizona has debuted this year.

“We are playing by different rules,” Plenkovich said. “They are in a different category than we are.”