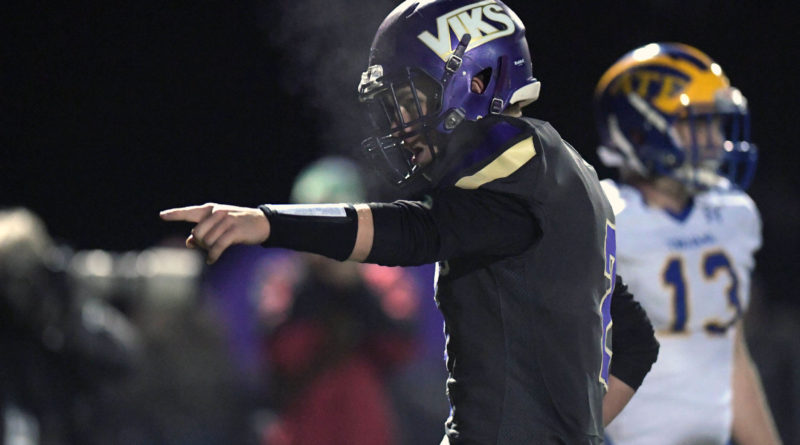 POULSBO — The name Colton Bower coursed through the stadium speakers again and again on Friday night.

And for good reason: three touchdowns runs. A slew of tackles. And the game-winning 33-yard field goal with 18 seconds left.

Bower did it all, powering North Kitsap to a 25-28 win over Fife on Friday night at North Kitsap High School in a Week 10 loser-out district crossover that punched the Vikings’ ticket to the 2A state tournament.

“We don’t really kick very many field goals,” Bower said, “but we had to when it came down to it and we made it, so that’s what counts.”

This came a year after Fife knocked North Kitsap out of the first round of the 2A state playoffs by a last-minute field goal.

After a slow-to-go third and early fourth quarter filled with injury delays and penalty flags, Bower ran 56 yards to set up his third touchdown run and tie the game at 25-25 with 5:37 left in the fourth quarter.

The Vikings forced a punt and got the ball back near midfield with just over four minutes to play, and a series of back-and-forth penalties and Bower runs set up the game’s go-ahead field goal in the waning seconds.

The Trojans, which went to the 2A state semifinals a year ago, were not without a spark.

Jay Harper-Brooks busted out touchdown runs of 69 and 77 yards in the first half, and quarterback Gabe Duenas hit R.J. Edwards in the corner of the endzone with eight seconds left in the half to send Fife into half up 22-18.

Where will the Vikings be seeded?

North Kitsap’s playoff seeding and first round matchup will be decided on Sunday morning by the 2A seeding committee, which meets at the WIAA’s office in Renton to seed the field, 1 through 16.

The Vikings (8-2, 6-0) won the 2A Olympic League with losses to Bainbridge and Steilacoom.

“We learned that no matter how young we are, how old we are, we can battle with anybody,” Bower said. “It doesn’t matter who’s across from us, we’ll battle no matter what.”

The North Kitsap graduate is in his ninth season at the helm, and previously coached at Klahowya and more notably Shorewood High School, where he notched three postseason berths.

“Good for him man, he deserves it,” Bower said. “He coaches every week like it’s his last week and I love playing for him. He’s a good coach.’

Backup quarterback Brynna Nixon, who became the first girl in Fife school history to throw a touchdown pass last week, came in for one play on the Trojans’ scoring drive in the final minutes of the first half. She handed the ball off.

“We went down fighting tonight,” Nixon said. “Nobody on that sideline said that we were going to lose. We were all pushing as hard as we could to the very end and I couldn’t be more proud of these guys for that.”