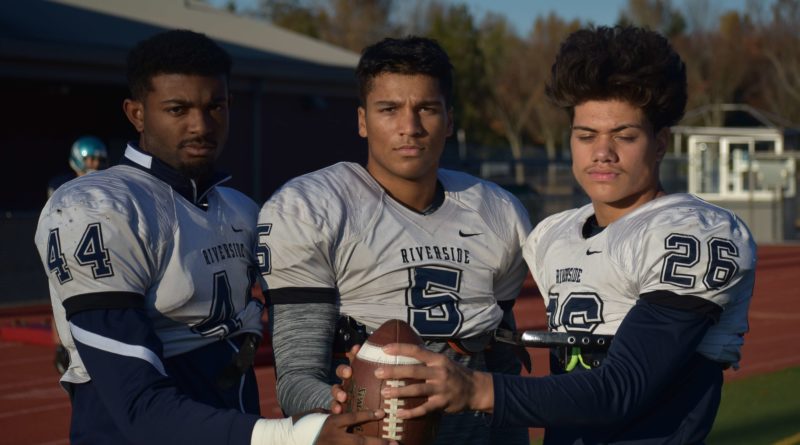 “A Dodge Ram truck with a Hemi (engine),” Yzaguirre said.

Whatever the car – and whoever is the driving force – this is the road the Ravens have taken to great success (and a Class 4A district playoff berth) in the 4A NPSL.

Auburn Riverside leads the league with nearly 275.0 rushing yards per game. The Ravens play 4A KingCo champion Bothell on Friday in a round-of-32 playoff matchup.

“Honestly, (the Cougars) are a good team,” Tauiliili said. “But if we do our jobs, we should have a great chance to win.”

Last season, the Ravens were a two-pronged attack with Forward, who missed three games because of an ankle injury, and Solis. Despite the fact the two running backs combined for 1,358 yards and 14 touchdowns, the team finished a disappointing 3-7.

Tauiliili transferred in as an all-2A SPSL first-team tailback from Foster High School last spring. One of the first people he met was Forward – in U.S. history class.

“I asked him, ‘What position did you play (at Foster)?’ and he said it was at running back,” Forward said. “I said, ‘I play running back, too.’

“We’ve become good friends, but I let him know I was the top guy. He was respectful.”

It was hard to argue that point, given that Forward is the team’s top talent, high-profile recruit (10 FBS/FCS offers) and arguably its hardest worker.

“He is our best overall athlete,” Yzaguirre said.

In the offseason, it was Solis – the biggest of the three at 6-foot-3, 220 pounds – who came to Yzaguirre and suggested he moved to a fewer-carry H-back position, just so Tauiliili could be heavily integrated in the team’s two-back spread attack.

“I mean, I watched the Hudl tapes of him and his brother (Arona), and knew they were pretty good,” Solis said. “And say I got hurt, I knew the team would need a linebacker more than a running back. That was pretty much why I did it.”

When healthy, Forward always starts the game in the backfield. By the third or fourth series, Yzaguirre starts rotating in the other two guys – first with Tauiliili, then with Solis.”

All three of them have closed out multiple games.

On a few occasions, Yzaguirre has played all three of them at the same time.

“It has worked out well for us,” Forward said. “I know my legs are fresher for offense.”

Added Yzaguirre: “They are completely unselfish. They just want to win ballgames.”