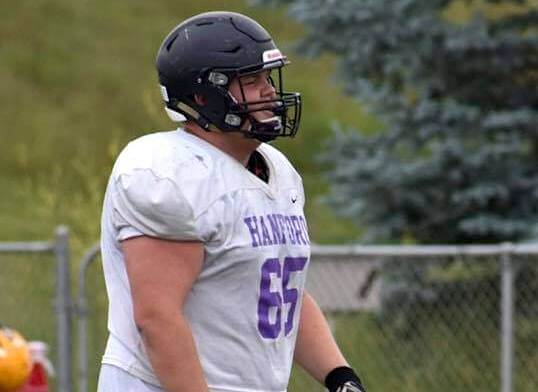 In a competitive, physical and sometimes unpredictable Mid-Columbia Conference, Hanford has managed to do the very thing that will ensure team’s the highest likelihood for postseason success: peak at the right time.

While Hanford coach Brett Jay says “we’re getting closer,” his Falcons have sure produced wins when needed, coming off of a come-from-behind win over Richland to secure a 4A MCC-Greater Spokane League crossover berth, the second time the program has ever beat its area rival.

Hanford’s second consecutive postseason berth is rather remarkable, considering it replaced 29 seniors who were instrumental in helping turn around a program that went 0-10 before Jay got the job in 2015.

“I can’t thank them enough for the program turnaround,” Jay said of his departed senior class. “This year we had less seniors, but dynamic seniors who wanted to continue our program rise.”

But program turnarounds are nothing new to Jay. In his first head coaching job — one he was hired for at age 24 — he took 1A River View to the school’s first 1A state semifinal appearance in 2012.

He then spent a year as the head coach at 4A Monroe, which proceeded to seven games, the most wins the program had seen in nearly 20 years.

At Hanford, Jay says the team’s success is in large part because of a core group of seniors that wanted to build on last year’s postseason berth, which ended in a 28-24 crossover loss to Gonzaga Prep.

That starts with Konner Oberman, who stepped from a role as backup safety to starting middle linebacker. Oberman leads the team in tackles. Two-way starter Kamari Durmas has 865 yards rushing on the season, 11 total touchdown and a league-high 7.9 yards per carry.

And the most eye-popping seasonlong performance has been that of quarterback Easton Wise-Hyde, who leads the league in both passing yards and efficiency. Wise-Hyde has been in the Falcons’ system since middle school and was well versed in the offensive system as a first-year starter.

It’s been his willingness to tighten his throwing mechanics — his progression at the line of scrimmage, and his accuracy. Credits adjustments and effort made early in the season for Wise-Hyde’s completion percentage spike, which went from around 30 percent through the firs three games around 60 percent now.

“Huge commitment on his part,” Jay said. “Once bullets are flying it’s different than camp. It’s a process. It takes time.”

It helps, too, that Hanford’s most experienced position group was its four returning starters on its line, which Jay says has allowed the offense to flourish to an MCC-best 423.2 yards per game.

“It’s always a grind. We worked at this starting last winter to get to this point. It’s what makes it all work it,” Jay said. “But it’s also what can cause so much pain when it doesn’t go so well. So we’re living in the moment and appreciating it all.”

All statistics are according to MCC statistician John Crawford

As Gonzaga Prep has bobbed and weaved through the turbulent 4A Greater Spokane League into the Week 10 Mid-Columbia crossover, it has been led by a steady presence under center.

That’s sophomore Ryan McKenna, the youngest of three of head coach Dave Mckenna’s children, and a dual-threat option who has carved through defenses on the run as well as through the air.

Just ask Jay, the coach who is charged with scouting the Bullpups ahead of the Week 10 crossover on Friday at Gonzaga Prep.

“He can break one at any moment,” Jay said.

The sophomore had 114 yards rushing, including a 54-yard touchdown in a 21-20 win over Lewis and Clark to secure the 4A GSL’s top seed in the crossover.

For Ryan McKenna, who became Dave McKenna’s first sophomore starting at quarterback in his 12th season at G-Prep, it’s his toughness as much as his speed that explains his sustained success running his triple-option.

Toughness forged not just on the gridiron, but also on the ice, as he plays center for the Spokane Braves youth hockey team, and at home, where he grew up with older brothers Connor McKenna, who was a linebacker on Prep’s 2016 4S state championship team and Hunter McKenna, a linebacker who graduated in 2018.

Ryan’s older brothers have loved watching him succeed this season. The three were a team growing up, Dave McKenna said, though Ryan, separates himself by being the “most coachable” of the bunch. Plus, his older brothers helped him build his toughness.

“They beat the s*** out of him growing up,” Dave McKenna said, chuckling. “They knew if he cried, they’d all get in trouble.”

Pullman (6-3) will join Clarkston in a district crossover postseason game in Week 10 after winning a three-team college rules tiebreaker.

The Greyhounds beat Cheney and West Valley (Spokane) to nab the second seed in the 2A Great Northern League-Central Washington Athletic Conference crossover Friday at Othello.