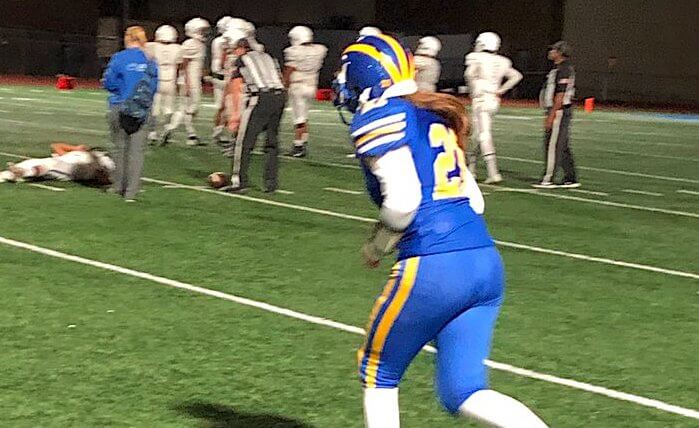 When starting Fife High School quarterback Gabriel Duenas came up hobbled after a play late in the third quarter, longtime coach Kent Nevin signaled the backup to go in and run the show.

Her name is Brynna Nixon.

And the junior wasn’t in the game for show — the Trojans needed to win a 2A South Puget Sound League crossover game Friday against Clover Park to reach the district round of the playoffs.

Not only did Nixon run Fife’s vaunted Wing-T offense to perfection, she threw a 20-yard touchdown pass in the team’s 50-21 home victory.

“Nobody was like, ‘Oh my god, what do we do?'” said Nevin, in his 17th season as the Fife coach. “There was never a question Brynna was going in, and that we were going to throw, and do everything we normally do.”

On her first series late in the third quarter, she attempted a pass that fell incomplete.

But Nevin went right back to it when the Trojans marched into the red zone.

Nixon barked out the signals, and waited for Jay’vonn Harper-Brooks to pass by her in motion as the wing back before she took the snap.

She immediately rolled out to her right. As a Clover Park defensive lineman charged up in her direction, she leaned back and fired off a pass near the right pylon.

Fulback Malakai Koke was right there to haul it in over his shoulder against tight coverage for the touchdown — and 43-13 Fife lead.

“When she went in, it was a little crazy,” Nevin said. “When she scored, everyone lost it.”

Nixon, a three-sport standout with an extensive background in lacrosse, isn’t new to football, Nevin said.

She has come up through the Fife youth leagues, and has been running the varsity Wing-T offense since the fifth grade.

Nixon also plays outside linebacker, and “can knock people on their (butts),” Nevin said.

But after a sitdown meeting with Nevin last offseason, Nixon returned for her junior season solely concentrating on playing quarterback — and won the No. 2 job behind Duenas, a first-year starter.

All season, the 5-foot-10 Nixon has been the starting junior-varsity quarterback.

“She does fakes … and knows the intricacies (of the Wing-T) because she has run it since fifth grade,” Nevin said. “She is great with the handoffs … and she can run the waggle play-action pass.

“There is not one ounce of hesitation in her.”

And on Friday, Nixon was pressed into important duty — and finished out the game.

It is unclear what Duenas’ status is for Fife’s 2A district game at Olympic League champion North Kitsap. If Duenas cannot go, Nixon would start the game, Nevin said.