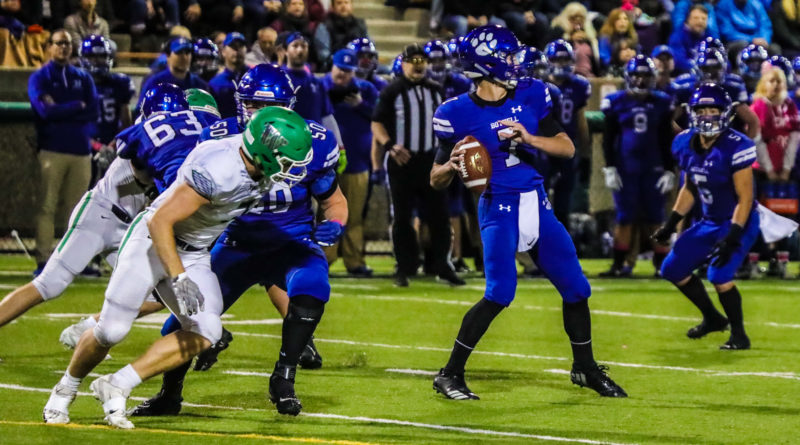 Here is an inside look at the top high school football games across the state of Washington in Week 9, as compiled by reporters Todd Milles and Andy Buhler.

Game nugget: The last time Eastlake coach Don Bartel faced a Tom Bainter-led Bothell squad in the KingCo championship game was 2012. Bartel was the defensive coordinator at Skyline, which defeated the Cougars, 34-7.

About the Cougars: If you’re surprised Bainter’s group is in this position – you shouldn’t be. Their two losses are to a pair of top-three teams – No. 1 O’Dea (3A) and No. 3 Kennedy Catholic (4A). RB Christian Galvan (league-leading 158.2 all-purpose yards per game) is the best overall tailback in the KingCo. And WR Jordyn Turner (27 receptions, 484 yards, seven TDs) is a matchup nightmare on the outside for first-year starting QB Andrew Sirmon. Bothell’s last league title came in 2014.

About the Wolves: Quick, can you name the top-producing offense in the 4A KingCo. It would be Eastlake at 435.1 yards per game, led by standout dual-threat QB Grady Robison (93-166, 1,504 yards, 14 TDs; 106 carries, 705 yards, nine TDs), a Montana State commit who likely is the frontrunner for league player of the year honors. LB Garrett Carney (7.7 tackles per game) leads a stellar linebacking corps that is tough against the run (No. 2 in league at 112.9 ypg) and good at taking the football away (14 turnovers).

Game nugget: One team will be left home in a tight 4A Greater Spokane League where three teams are fighting for two postseason spots. It could very well be the loser of this game.

About the Saxons: Ferris will be relishing its 34-0 shutout of perennial area power Gonzaga Prep. It undoubtedly hopes to be doing so with a playoff berth. Nate Schlosser and Brent Jones lead the run game for Ferris and quarterback Jack Clavel leads the the charge under center. Zach Fleming is a college-level cornerback on defense for Ferris. The Saxons’ lone loss of the season came at the hands of Central Valley by 10 points. Now, Ferris has the chance to secure playoff position with a win over Mead.

About the Panthers: Mead possesses a future college quarterback and perhaps the most important thing heading into week nine: momentum. Its two blemishes of the season were to Idaho power Coeur d’Alene and Gonzaga Prep, a team that got beat handily by Ferris. But Mead’s season has been as impressive as anyone in the GSL. Ryan Blair has established himself as a standout for Mead. He tossed for eight touchdowns in an out-of-state game earlier this month. And he’s coming off of a six-TD performance against University.

Game nugget: Camas may own the all-time series against its area rival, but Union has won the last two matchups in barn-burner fashion — by eight total points.

About the Titans: The defending 4A state champs have had significant ups, and significant downs this season. After a win over MCC power Chiawana helmed by its backup quarterback, Union has taken care of business when it needs to this season. And the Titans have challenged themselves, too — see: a late comeback against Puyallup, a road loss to Eastlake and road beating of 2A power Steilacoom. Quarterback Caleb ‘CJ’ Jordan is a dual-threat option under center, Isaiah Jones is a formidable option at running back and Tobias Merriweather continues to rack up power-five offers at wide receiver and corner. A win at Camas? And Union would force a three-way tie atop the 4A GSHL.

About the Papermakers: Camas has as impressive as any 4A team across the state this season. The Papermakers have beat 3A power Lincoln, blitzed past Bellevue (24-7), Sumner (52-0) and cleared a formidable hurdle in Skyview last week, 21-17. But Camas’ final hurdle en route to a 4A GSHL title comes must be cleared without starting quarterback Jake Blair, who suffered a broken collarbone in week eight and will miss the remainder of the 2019 season. But the Papermakers sport perhaps the state’s most formidable offensive line, a running back tandem tin Jacques Badolato-Birdsell hat has wreaked havoc and a receiving target in Jackson Clemmer that head coach Jon Eagle has looked to get the ball to more. Can the Papermakers clear one final hurdle en route to a league title?

About the Wildcats: La Center’s experience-laden roster has responded from its losing season a year ago, one that it finished second in a league the Wildcats have held a firm grip on in recent memory. Tom Lambert, head coach John Lambert’s son, hasn’t just improved as a passer, but he’s also leading the team in rushing with 742 yards and 11 touchdowns on the season, per The Columbian. That’s in addition to his nine passing touchdowns and 842 yards in the air. The Wildcats don’t just have good wins in-league — the team is shaping up to be a 1A playoff contender. That picture will be clearer as it takes on Castle Rock. La Center has won the last eight meetings, and by a resounding margin. This year shapes up to be a closer matchup.

About the Rockets: What’s more to say? Castle Rock is undefeated in Trico League play and possesses among the state’s most prolific rushers across all classifications in Wyatt Partridge. The junior has rushed for 1,867 yards and 19 touchdowns, per The Columbian. And the Rockets have made a name for themselves throughout league play. But outside of Castle Rock’s Trico slate League opponent, it lost to Hoquiam 48-12 in week one — the same score by which La Center beat Hoquiam in nonleague. Castle Rock has not scored on the Wildcats in two years. But it appears to be uniquely equipped to challenge the Wildcats this season.

About the Braves: Don’t tell Bethel it is a decided road underdog – the Braves had leads in losses to No. 3 Kennedy Catholic and No. 1 O’Dea earlier this season before going on their current six-game winning streak. And they have the athletes to match up with Lincoln, led by QB Kekoa Visperas (112-185, 1,657 yards, 14 TDs, two INT; 207 rushing yards), whose confidence continues to grow in his first year as a starter.  RB Will Latu (82 rushes, 373 yards, 10 TDs) is a power runner, and WRs Cameron Parker (32 receptions, 683 yards, nine TDs) and Puka Sokimi (35 receptions, 470 yards, six TDs) are reliable playmakers. Bethel’s last league title came in 2003.

About the Abes: It isn’t a question how high-powered Lincoln’s offense – it is which way will the city’s top program beat you. For much of the season, the Abes have spread defenses out and let QB Caden Filer (177-250, 2,086 yards, 22 TDs, seven INTs) go to work, looking for WR/RB Julien Simon (590 receiving yards, 139 rushing yards, 13 total TDs) and WR Jaylen Clark (35 receptions, 458 yards, seven TDs). But last week, they displayed a little bit of power, mainly running out of the I-formation with RB Abner Sio (62 rushes, 732 yards, 11 TDs) in a 42-21 victory over Lakes, avenging their only league loss from 2018. There are athletes everywhere, and Lincoln can win its third 3A PCL title in the past four years.