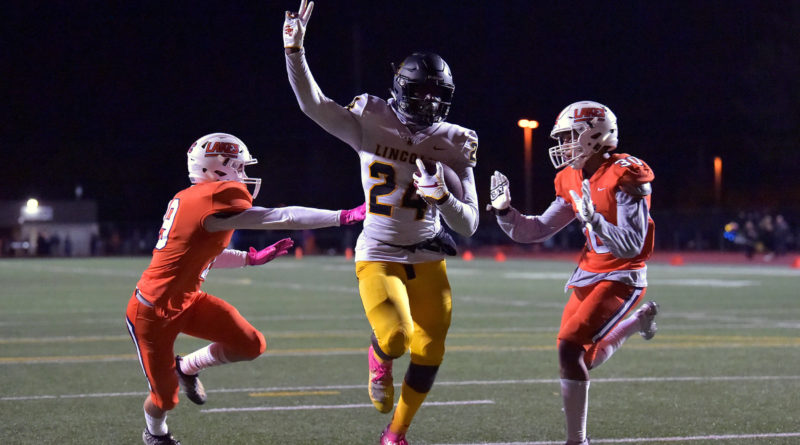 The Lincoln Abes have a long memory.

Nearly a year ago, they were soundly beaten by Lakes – not only on the scoreboard (42-24), but by sound strategy as the Lancers laid defenders back to force the Abes’ passing attack to try and dink and dunk.

So in the rematch Friday, the Abes did something different.

And it worked. The third-ranked Abes ran by the No. 6 Lancers, 42-21, at Harry E. Lang Stadium in Lakewood.

The win set up a winner-take-all matchup with No. 4 Bethel next week for the 3A Pierce Country League championship at Lincoln Bowl.

Here are five takeaways from the No. 3 Lincoln-No. 6 Lakes game:

BY THE POWER OF THE RUN, LINCOLN GETS ITS REVENGE

Don’t let coaches tell you they don’t revisit disappointment. And one of the offseason topics for the Lincoln coaching staff was how Lakes dictated the terms in its 2018 loss.

So, coach Masaki Matsumoto approached his team back in training camp about changing up the Air Raid passing attack in favor of a run-oriented offense for special circumstances.

So they debuted a double tight I-formation Friday against the Lancers, and had 32 rushing attempts (out of 34 first-half plays) for 206 yards and four touchdowns in building a 28-14 halftime lead.

Lincoln finished with 251 rushing yards on 51 carries for the game.

“We thought we had the (offensive line), the running backs and receivers who were going to be unselfish and block to do that this year,” Matsumoto said. “That is what we did. The kids played unselfishly.”

Lakes coach Dave Miller admitted he never could have anticipated the Abes would have relied so much on the run.

“We had to adjust on the fly,” Miller said.

A lot of the times, that doesn’t fit into the Abes’ preferred mode – passing downfield.

But after having just 42 carries (for 626 yards) in Lincoln’s first seven games, Sio saw a season-high 19 carries for 106 yards and a touchdown in the Abes’ win over Lakes.

And Sio’s workload started early. He opened Lincoln’s first series with a 10-yard scamper – and closed it with a 17-yard scoring rumble.

“Especially in past weeks, I know I haven’t gotten that many carries, but I’ve made the most of them,” Sio said. “Today, I was ready to do it.”

ARE THERE FIVE JULIEN SIMONS PLAYING AT ONE TIME FOR THE ABES?

Junior Julien Simon plays slot receiver, running back and Wildcat quarterback on offense, and all over the field as a hybrid linebacker/safety on defense.

It is difficult to know from what direction he will strike next.

On Friday, he did a little bit of everything by rushing for 41 yards on 12 carries. He scored on three touchdown runs, all out of the Wildcat direct-snap formation. And he even completed (finger-rolled?) a two-point conversion pass.

On defense, he had a pass deflection – and notched a big sack on Lakes quarterback Justin Brennan on the Lancers’ promising first drive to start the second half.

“He is very intelligent – in anything,” Matsumoto said. “In terms of football, he is very savvy and very wise. He knows what to do with the football.”

It hasn’t quite been the senior season Donovan Clark expected when he came to the Abes from Sumner.

He’s been in and out of the lineup with an injury. And before Friday, the Boise State cornerback commit had not even registered an interception.

But Clark closed the door on Lakes with his best play of the season.

Clark snatched a Brennan pass out of the air intended for Jaedon Hall and returned it 45 yards for a touchdown to give the Abes a 35-14 lead with 2:55 remaining in the third quarter.

“He came in February and has been nothing but team-first,” Matsumoto said. “He is a leader. He’s been great.”

But with the Abes driving deep into Lakes territory in a 14-14 game midway through the second quarter, Nofoa-Masoe came out of a scrum badly limping with an ankle injury. Simon scored on the next play.

Nofoa-Masoe returned late in the first half for one carry, but was sidelined the rest of the game. Suddenly, the Lancers were without their top tailback, linebacker – and punter.

“He is our best player on offense, defense and special teams,” Miller said.

Lakes had a final chance to make a game of it, driving to the Abes’ 10-yard-line on its first second-half drive. But Simon got the sack on third down, and Brennan’s fourth-down pass to tight end Rafi Mbuja fell incomplete.

Lakes will be the 3A PCL’s third seed to the district playoffs.

“We are still a work in progress,” Miller said. “We showed some flashes at times, but we are not as consistent as we need to be.”