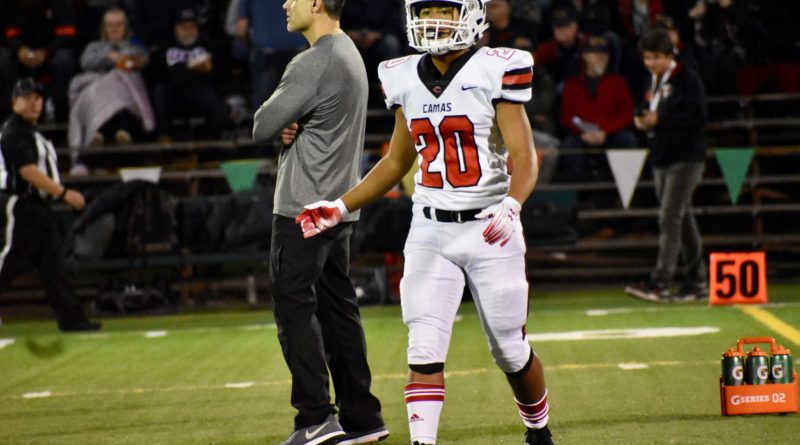 VANCOUVER — Camas has labeled this season its “Revenge Tour,” marking the sought revenge of every team that beat it a year ago as the team went 5-5.

Camas (8-0) fended off a second half comeback to beat Skyview (6-2) 21-17 at Kiggins Bowl on Thursday evening, a game that positioned the Papermakers to reclaim the 4A Greater St. Helens League.

“It means so much,” Camas running back Tyler Forner said. “That was one of our biggest check marks on our revenge tour.”

Camas’ do-it-all playmaker had himself another standout night.

Forner ran for two touchdowns on the night, picked up the game-sealing first down on 3rd and 5 with less than two minutes to play. He seemed to have his prints on everything Camas did Thursday night — offense, defense and special teams.

The senior linebacker/running back’s second touchdown run was a 78-yard sprint outside in which he beat the entire defense down to the edge and down the left sideline.

It also came moments after Skyview got on the board, and signaled perhaps the Papermakers, who led 21-3 at half, were in position to run away with the game.

Forner was a rock for the Papermakers all night. Asked about his contributions, the senior cited a connection with his teammates as a driving motivator, particularly the offensive line.

“We have the best O-line in the state, they were coming at me like ‘we got you, you got this, let’s go,’ ” Forner said. “They have that lineman bond, just a pleasure to run behind them.”

Skyview was in position to score the go-ahead touchdown late

Skyview pulled out its bag of tricks on a late drive to set itself up for a go-ahead touchdown.

A big-gain flea-flicker on third and five buoyed a drive that ended at the one-yard line with around six minutes to go, down four. But at the goal line, Storm running back Jalynnee McGee took a handoff and lunged toward a pile of defenders, and stretched his arm out to try to get the ball in the end zone, but Camas stripped him before he crossed the plain.

Camas took possession back. While it wasn’t the Storm’s final possession, it was their closest opportunity to claim the lead late in the fourth quarter.

“I knocked Jalynnee a little bit, I mean, I tried to go into him after I got off the block,” Forner said. “Bumped him into our dudes and they just kind of went ham and something happened in the pile.”

McGee and some others thought the ball was over the goal line before it got stripped, and should have been a touchdown.

“Refs didn’t see it, so got to erase it from my mind and get back to it next week,” McGee said. “I thought I was in. Should have just kept the ball tucked, pushed my way in, but I’ll learn from my mistakes.”

History doesn’t repeat itself, but it often rhymes

The circumstances were eerily similar to a year ago, as quarterback Jake Blair was sidelined with an injury on Thursday, and Camas had to find a way to hang on.

This time it was a big hit in the third quarter that had Blair gingerly walking off the field clutching his shoulder (which was later found to be a broken collarbone).

A year ago it was senior QB Andrew Boyle who went down with an injury in the first half. Both this year and last, that left senior backup Blake Ascuitto charged with fending off the momentous Storm.

In the end, the Camas offense did not score in the entire second half — a first this season. And the defense made the play of the game, stripping the ball from Skyview running back Jalynnee McGee at the goal line.

“The defense came out and made the big plays when stye had to,” Eagle said. “We weren’t at our sharpest on offense. We were dinged up and kind of caught up with us a little bit. But we had a lot of kids step up and make big plays.”

Despite loss, Skyview feels it can play with anyone

Skyview played the vast majority of the game from behind after Camas got up to a 14-3 lead early, and 21-3 lead at halftime.

The Storm feel that’s a positive, given they pulled back into the game. A similar situation occurred in Skyview’s week three loss at Mount Si.

“We got behind, and it doesn’t really faze us,” Skyview coach Steve Kizer said. “We got behind there and we should have won. I’m tired of saying that, but we’ll get over the hump here real quick.”

McGee said he hopes the two teams meet again in the playoffs, because he feels Skyview wouldn’t lose twice.

Several players, including quarterback Yaro Duvalko spoke up during halftime to motivate their teammates, who responded in the third quarter.

“We made a couple adjustments, we figured, we can play with these guys, so let’s go,” Kizer said. “I’m not so sure in the first half we knew that. We proved we can play with anyone in the state.”

Camas in the driver’s seat for a league title

Camas has one league game left, its annual showdown against rival Union (5-2), but the Papermakers cleared their biggest 4A GSHL hurdle Thursday night.

Camas, the last undefeated team in the league, knows that. But players refuse to let that cloud their focus heading into week nine.

“We put so much work in, these group of guys, for two years straight,” Forner said. “We just don’t want to lose. There’s no way.”