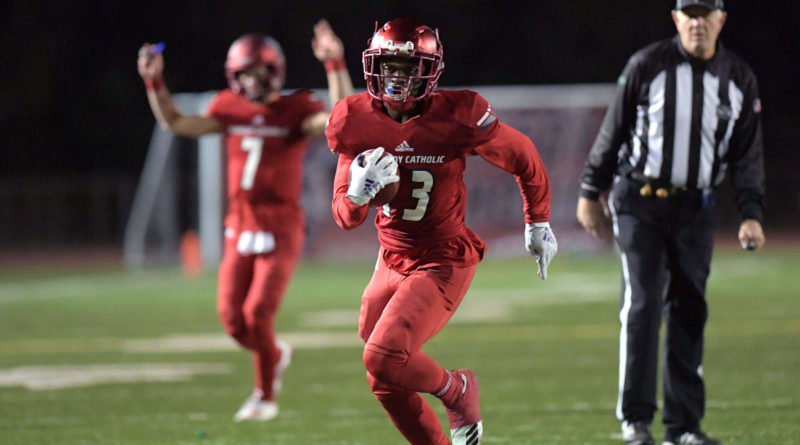 Leave it to Kennedy Catholic football coach Sheldon Cross to dig through boxes being stored in the school’s physical-education office — and find an old league championship banner.

Cross not only came across the Lancers’ last NPSL league championship banner from 1976, he took a piece of masking tape and wrote “2019” over the year.

And after third-ranked Kennedy Catholic walloped Kentwood, 69-36, on Saturday night to win the 4A NPSL Mountain title, he presented the banner to his team in the post-game huddle on the east side of Highline District Stadium.

The next one? Winning a league title next weekend against Federal Way High School.

And after that? Who know how far this Lancers’ team can go in the Class 4A playoffs.

“I feel like this team is really clicking at the right moment.- and we’re just getting started,” Lancers quarterback Sam Huard said.

Here are five takeaways from the No. 3 Kennedy Catholic-Kentwood game:

Huard, who threw for 403 yards and seven touchdowns in the win Saturday, became the seventh high school quarterback in Washington to pass for 10,000 yards for his career.

He did that on his 50-yard touchdown pass to Justin Baker midway through the second quarter.

He is also probably aware that Shadle Park’s Brett Rypien holds the top spot at 13,044 yards, set in 2014. But he wants more.

There isn’t a player more respected in the Lancers’ locker room than Cal commit Justin Baker, a senior wide receiver.

Baker did most of his damage in the first half, hauling in scoring passes of 20, 16, 45 and 50 yards, then adding a 15-yard touchdown scamper with 2:25 remaining before halftime.

Baker said all week, when the team reviewed Kentwood film from other games, often times the Conquerors defensive backs did not get a whole lot of safety help.

Surely that would change Saturday?

Senior Zaire Lozolo has all the moves of a powerful starting tailback – swift cuts, bouncy hips and explosiveness.

But at the end of the regular season, Lozolo has a complementary running mate – junior Leland Ward.

In fact, Ward led all rushers Saturday with 136 yards on 11 carries, scoring a pair of touchdowns (6, 29 yards). His 6-yard score came on the team’s opening drive of the game.

And the one thing Ward does better than any running back on the Kennedy Catholic roster? He sprints like a speeding rocket through any opening.

“I started hitting my stride in Week 3 against Blanchet,” said Ward, adding he has never run track – or even posted a 40-yard time. “I’ve sort of become that change-of-pace back.”

Johnson represented the best remaining test to try and solve the Conquerors’ surprisingly stout middle Saturday night – and found it to be tough sledding.

The Kentwood standout finished with 45 yards on 18 carries.

In the first half, he had 33 yards on 17 attempts. Only six times did he gain 2 or more yards on a carry.

When Kentwood kicked a last-second field goal to edge the Lancers, it was the biggest gut punch of a loss Kennedy Catholic had all last season.

They felt it the rest of the year – and into the offseason.

“Last year hurt our guys. It hurt our program … and one we thought about for a long time,” Cross said. “Our guys were motivated to play the best they could tonight – and be a championship type team.”

It showed early as the Lancers scored on their first four first-quarter drives, building a 28-7 lead.