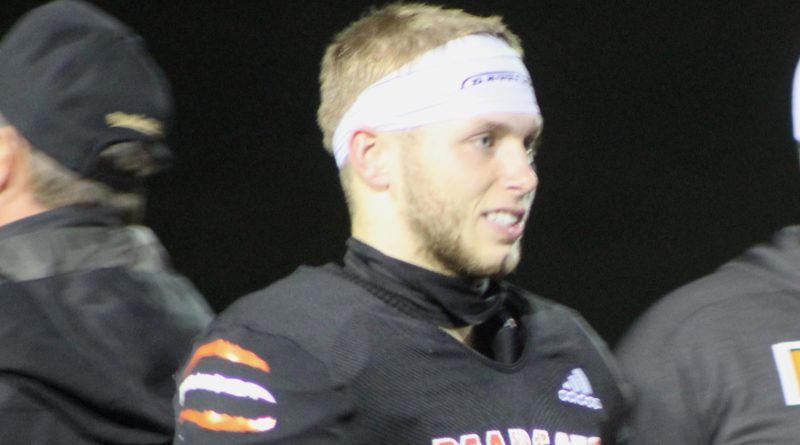 Senior wide receiver Efton Chism III did all he could to make sure Friday was not his final home game with Monroe.

Chism scored three touchdowns, rushing for two and throwing one, to lead the Bearcats to a 32-10 victory over Glacier Peak. With the win, the Bearcats clinched the No. 2 seed in the Wesco 4A and are guaranteed a home game in their playoff opener.

The Bearcats scored touchdowns on their first three drives of the first quarter and never looked back as they reeled off their fifth straight victory, all by 20 or more points, since losing 73-28 to No. 1 Lake Stevens.

“We wanted to make a statement early,” Monroe head coach Michael Bumpus said. “We felt we could jump on them early.”

Here are five takeaways from the Glacier Peak-Monroe matchup

With Halloween less than a week away, the Bearcats went to their bag of tricks on the first play of scrimmage and hit big for a 69-yard touchdown pass from Chism III to senior wide receiver J.R. Little. Running back Blake Rybar took a toss to the left before tossing to Chism, who set his feet and threw a downfield strike to Little, who ran uncontested to the end zone, giving Monroe a 6-0 lead just 20 seconds in.

“We run heavy out of that two back look, and we had a feeling they were going to overload that side, which they did” Bumpus said. “We just wanted to take a shot. … It was a great way to open the game.”

Chism contributed all over the field

The Eastern Washington commit finished 3-for-3 passing for 118 yards and a touchdown, caught five passes for 57 yards, and rushed five times for 63 yards and two scores

Chism III scored on a WR sweep on the Bearcats’ second drive of the first quarter from 31 yards out, giving Monroe a 12-0 lead. With 46 seconds remaining, Chism III capped the night with an 8-yard touchdown run for the game’s final score.

“He can do everything man,” Bumpus said. “ … I just trust him. Put the ball in his hands and let him be special.”

Chism caught a 30-yard touchdown in the third quarter, but it was called back by holding.

On defense, Chism III had several pass breakups at safety, helping hold the Grizzlies to less than 20 points for just the second time this season. Chism III also serves as the team’s punter, and downed his only punt insisde the 20.

Trailing 25-3 in the third quarter, the Grizzlies switched to a wing-t offense to put together their lone touchdown drive of the game. The Grizzlies, who usually operate out of the shotgun, switched to a power run game to orchestrate a 13-play, 78-yard drive capped by an 8-yard touchdown run by junior running back Ryan Black.

The Grizzlies recovered an onside kick after scoring their lone TD of the night with 11 minutes remaining in the third, but turned the ball over on downs after driving into Monroe territory.

The Grizzlies still have playoff seeding on the line

Glacier Peak will be battling for third place when it takes on Mount Vernon next Friday.

The Bearcats will take on Cascade to close the regular season before beginning postseason play.