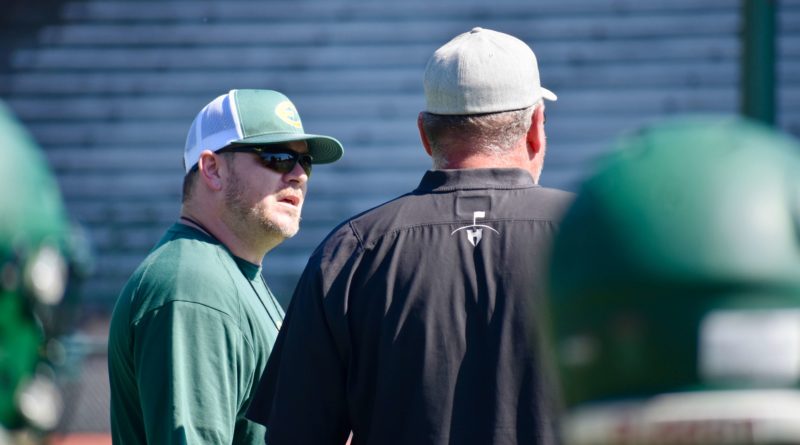 Not everything follows form in high school football — and that has certainly been the case in Washington this season.

Given recent past history, and the team’s preseason expectations, here is a list of five coaches who Scorebook Live thinks have done the best job guiding their respective programs in 2019.

Preseason predicted finish in 4A SPSL: Last out of nine teams.

Skinny: In a traditionally tough league with a lot of uncertainty surrounding the mid- to lower-tier teams, it is easy to quickly dismiss the program with just three winning seasons in school history. But in his first solo season leading the Jaguars, Schakel has been masterful in helping Emerald Ridge clinch just its second playoff berth ever. He’s had 17 seniors to lean on during the transition period, Because he is starting a good number of players both ways, the one thing Schakel did was slow the offensive pace down, which means running the football. And, the middle of Emerald Ridge’s defense has been stout, led by DT Jonah Mains and MLB Kaden Martin. Team is 3-0 in games decided by seven points of fewer.

Quotable: “This offseason, they really got after it. They said, ‘Enough is enough (with losing), and they’ve done everything we’ve asked. … It is nice to see it showing up on the scoreboard.” – Schakel.

Preseason predicted finish in 3A GSHL: Distant fourth out of five teams.

Skinny: Swain is a bit of a bad-program whisperer, taking hard-luck teams and turning them into winners. He did that at Roosevelt (Ore.) High School (2009-16) – and is now doing the same thing in his first year with the Plainsmen. Hired in May, Swain got a late start in establishing an offseason workout program, so what Evergreen has accomplished this season has been on the fly. The charge has been spearheaded by one of the best passing attacks in Southwest Washington, led by first-year starting QB Carter Monda (1,578 yards, 17 TDs, one INT). A major-league baseball prospect who had not played football since eighth grade, Monda has passed for at least 200 yards and multiple scores in four of the seven games. And on Friday, he led the Plainsmen from 15 points down in the fourth quarter to shock reigning 3A GSHL champion Mountain View (40-35), ending the Thunder’s 15-game league winning streak.

Quotable: “My personality fits really good at Evergreen, and I immediately felt a connection here. But it has taken time to build trust.” – Swain

Preseason predicted finish in 2A Evergreen Conference: Distant fourth out of six teams.

Skinny: It’s funny, even after a pair of 2-7 seasons in his return to his alma mater, Thibault felt the Tigers were close to turning a corner and getting back to winning more games. And the 1996 Centralia graduate has been spot on so far as they move closer to clinching a berth in the crossover playoff (likely against two-time defending 2A champion Hockinson). Say this about Thibault and his staff, they do not mind shuffling people around – and they have done that constantly with their personnel this season. And Centralia seems to have found a pair of good playmakers in first-year LBs Ephraim Halseth and Cameron Blankenship. And on offense, Brady Hoyt moved from wingback to fullback in the Wing-T attack, and has responded with 600 yards in being paired with near-1,000-yard RB Chase Sobolesky-Reynolds. Thibault showed in his last head-coaching job at Toledo, once he gets it rolling (40-15 record in five seasons, three state playoff appearances, two 2B semifinal trips), it stays rolling.

Quotable: “They are working hard. They are taking criticism. And they rebound (from setbacks) well.” – Thibault

Preseason predicted finish in 1A SCAC East: Sixth out of seven teams.

Skinny: It wasn’t that long ago when the Panthers were one of the top 1A programs in Eastern Washington under former coach Brett Jay (20 wins in last two seasons in 2012-13). And after he left, the program fell on hard times. Enter Kennell, who won five games in his first three seasons before leading the team to a 4-6 mark a year ago. Now with 15 seniors, River View is no longer a “house with no foundation,” Kennell said. The Panthers went into this season thinking they would lean heavily on a trio of senior rushers – RBs Spencer Weatherby, Isaiah Turner and Kolten Anderson – out of the Air Raid. But the QB Trey Sakota-WR Robert Nunez (11 touchdowns between them) has forced the coaching staff to reconsider its primary mode. After five consecutive losing seasons, River View has already clinched its first playoff berth since 2013.

Quotable: “One of the biggest things we talk about, you cannot just flip a switch in football. We needed kids to buy in … and we are now being a family.” – Kennell

Preseason predicted finish in 2B Pacific River: Fifth out of six teams.

Skinny: OK, so the Cardinals don’t yet have a feather-in-the-cap signature win this season. But the bottom line is, playing in big-boy District IV, they are winning games. And that has rarely been the case. Their last winning season was 2002 – and they endured a brutal 39-game losing streak (2010-14) before Samples arrived in town from West Virginia in 2016. The biggest reason the new coach focused on with all the losing was that players would come in “and play like individuals, then vanish off the face of the earth,” Needless to say, a team-bonding overhaul was in order, and this group has a couple of reliable leaders in RB/LB Logan Hall (who just suffered a season-ending knee injury last week) and OL/DL Nathan Suhrbier (school’s student-body president). On the field, the offense got a big boost when basketball standout Coleson Richendollar came out to be the team’s top WR threat as a senior, which was a big reason Sample went away from a triple-option rushing attack and more toward a spread-option passing offense.

Quotable: “A lot of these guys were ninth graders when I first started coaching here … and we are now geared up. This is our shot.” – Samples