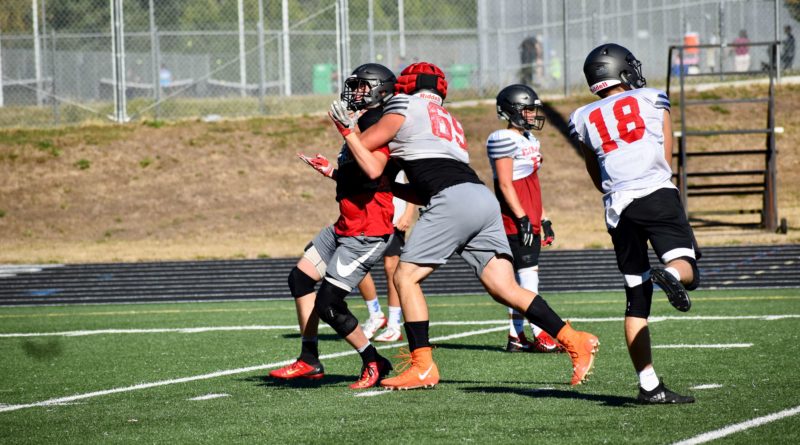 The Camas Papermakers have established themselves as a 4A title contender, but they may be without the team’s top recruit for the foreseeable future.

Offensive lineman Caadyn Stephen, a three-star USC commit, has been sidelined with a back injury since the Papermakers’ nonleague home win over West Valley of Yakima in week three.

The team believes the injury was originally suffered last spring while playing pickup basketball, and has nagged the senior ever since as he played football all through fall camp and the first three games of the season.

“He wants to be out there, just the world you live in,” Camas coach Jon Eagle said. “Obviously you’d like to have him out there.”

There is no timetable for a return. Stephen flew down to USC Wednesday morning and is being assessed by staff doctors and physicians.

Stephen moved to Camas from Alaska before his junior season, and has been an anchor on a sturdy Papermakers offensive line this season.

The loss and publicly unknown timetable for Stephen, the team’s most skilled and highest-projecting lineman, is blow to a Camas team shaping up to compete for a 4A state title. But part of what makes the line tough is its depth, and players’ fluidity across multiple positions.

“One thing about (offensive line coach Justen) Wochnick is he makes sure everyone knows the plays at every position,” senior lineman Tristan Souza said in late September. “Center, guard, tackle — it makes us more dynamic.”

Souza, a fellow senior, slid over and has played left tackle in place of Stephen over the last four weeks. Souza was a guard, but had experience playing tackle his sophomore year.

No. 4 Camas plays No. 9 Skyview on Thursday in a game that carries significant 4A Greater St. Helens League title implications with four weeks left in the season.

The Zetterberg cousins are taking over Cascade Christian football.

Four of them – seniors Conner, Isaiah and Griffin, and ninth grader Trey – are trying to help the Cougars make a deep run in the Class 1A state playoffs this season.

Conner, a wide receiver is the biggest name: He has team highs in receiving yards (710) and touchdowns (nine). But Isaiah, who plays both slot receiver and running back, is not far behind with eight touchdowns.

The other two are in their first year ever playing football.

“That is where I was in ninth grade,” Conner Zetterberg said. “So knowing where they are now (learning the sport) has helped me to help them a lot more.”

Last weekend against Chimacum, Conner, Isaiah and Griffin all started in the secondary for the Cougars.

Bellingham has forfeited its week eight game against Sehome citing a lack of players, which automatically hands the Mariners the 2A Northwest Conference Lake Division title for the second consecutive season.

According to Eric Trent of the Lynden Tribune, the forfeit sets into shape a district matchup against one of the bottom three teams in the NWC Sky division, which going into week eight is either Archbishop Murphy, Burlington-Edison or Blaine.

Todd Milles contributed to this report