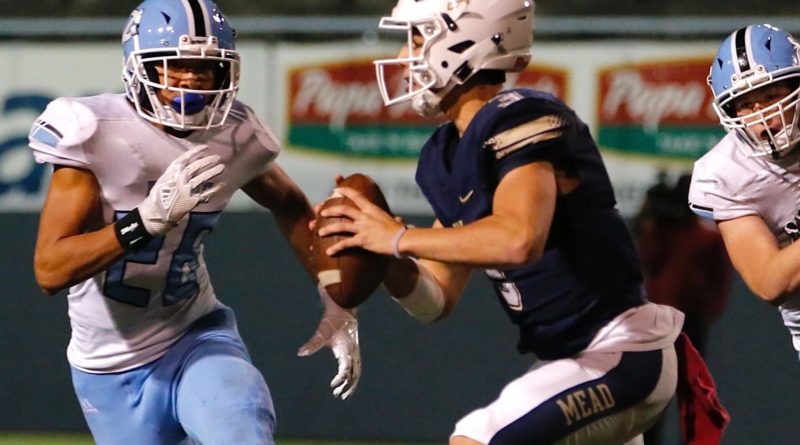 Usually by the eighth week of the regular season of high-school football, the playoff chase thins out.

But not in the Class 4A Greater Spokane League.

“We are four teams that each have different strengths, and I think the talent level on all four is pretty close,” Ferris coach Tom Yearout said. “It makes for some interesting matchups.”

Mead was the consensus preseason favorite, but was surprisingly drilled by Gonzaga Prep, 31-7, in Week 5.

After that game, Panthers coach Benji Sonnichsen figured the Panthers’ best chance to make the playoff rested on the arm of quarterback Ryan Blair. So, they have become a more aggressive passing team.

Blair passed for a school-record 513 yards and eight touchdowns in a non-league victory over Marina (Calif.) High School, then went for 259 yards and four touchdowns in Mead’s 35-19 win over Central Valley.

“If this season is going to go anywhere, we’re going to have to throw it 50 times a game,” Sonnichsen said.

No team has played a more challenging schedule than Central Valley, which opened with non-league victories over a pair of ranked 3A programs, Bellevue and Garfield, then handed 3A GSL favorite Mount Spokane its worst loss (27-7). The Bears have also beaten Ferris.

They controlled their own destiny for the 4A GSL crown – until losing to Mead last week.

“I knew going into this year, we had some parity in our league … just because there wasn’t a team that was light years ahead of anybody else,” Central Valley coach Ryan Butner said.

“I was really hoping we could take care of business Friday and create some space (in the GSL standings). But Mead is a pretty explosive team.”

Ferris has won five games on the road, and has posted arguably the most impressive victory during league play last week – a 34-0 win over Gonzaga Prep.

Of the four contenders, Gonzaga Prep might be the biggest surprise, given its relative youth and inexperience. But the Bullpups are the only GSL team to beat Idaho powerhouse Coeur d’Alene High School, and they have the victory over Mead.

The GSL only gets two berths to the crossover playoffs with the Mid-Columbia Conference. Central Valley hosts Gonzaga Prep on Friday, and Mead hosts Ferris in the regular-season finale Nov. 1.

“We are approaching them both (last two weeks) as playoff games,” Yearout said. “We knew going in how many teams get into the playoffs. I just hope we haven’t beat each other up so badly that they are hurting going into that first playoff game.”

Kennewick is in great position to nab the top 3A seed from the MCC, but the Lions will move forward without one of their leaders for the foreseeable future.

Senior quarterback Blaine Chavez underwent surgery at Shriners Hospital for Children in Spokane over the weekend for a staff infection in his shin area, and could miss up to three weeks.

“We’re just waiting to see the process of what happens,” Kennewick coach Randy Affholter said. “One good thing is (the infection) is not in his ligaments, kneecap, or that area.”

Wide receiver Elijah Tanner will fill in for Chavez. He completed 13 of 19 passes for 237 yards and three touchdowns Friday in the Lions’ 28-14 win over Walla Walla.