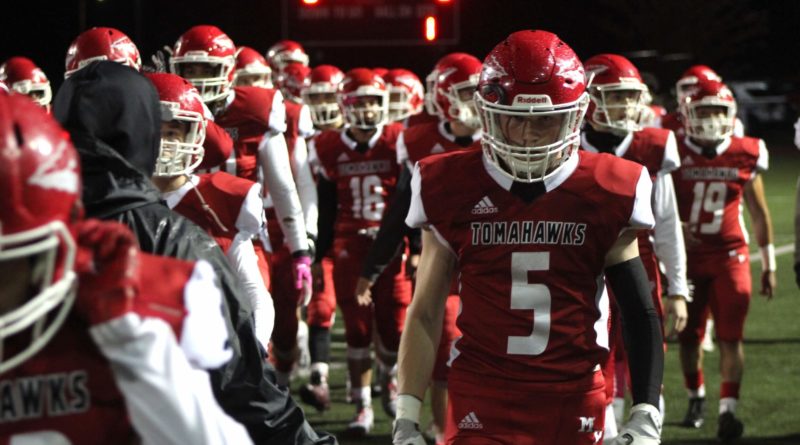 Running back Dylan Carson may only be a sophomore, but proved himself to be one of Wesco’s best running backs Friday night.

“We came out and made a couple of adjustments at halftime,” Marysville Pilchuck head coach Brandon Carson said. “And Dylan came out and hit a couple big plays there early to get the momentum on our side.”

Leading 21-14 at halftime, Carson ripped off scoring runs of 80 and 66 yards on the opening plays of consecutive drives to begin the third quarter as the Tomahawks (7-0, 5-0 league) ran away and kept their perfect season alive.

Here are five takeaways from the Ferndale vs. Marysville Pilchuck matchup:

Dylan Carson is a workhorse running back

Carson gave MP a 14-7 lead with his first touchdown of the night, scoring from seven yards out on 3rd-and-4 with 3:48 left in the first quarter.

On the first play of the second half, Carson jetted 80 yards down the right sideline for his second score of the game to give the Tomahawks a 28-14 advantage.

And he didn’t stop there. After the Tomahawks forced a stop, Carson took the first play of the ensuing drive straight up the middle for a 66-yard score to put MP ahead 35-14.

“He ran hard tonight” said Brandon Carson, Dylan’s father. “We’re real proud of him tonight. And good thing he runs like his mother.”

The Tomahawks entered the night averaging 330 yards rushing per game and finished with 376 yards on Friday.

Senior running back Jordan Justice, who entered the night as the team’s leading rusher, added a pair of scores for MP, scoring from 47 yards out in the first half and adding a seven yard score in the third. Justice tallied 80 yards on nine carries.

“It’s a great one-two punch that we have with our offense,” Dylan Carson said of himself and Justice.

The Tomahawks’ defense was stellar in the second half

The Tomahawks shutout the Golden Eagles (3-4, 3-2) in the second half to keep their streak alive of allowing no opponent to score more than 22 points in a game this season.

“I thought our defense really stepped up there in the second half,” Dylan Carson said.

The Golden Eagles entered halftime with 239 yards of total offense but finished with just 337 and turned the ball over three times.

Both teams were hurt by the turnover bug

Ferndale dug itself an early hole when sophomore Thomas Broselle fumbled the opening kickoff, and the Tomahawks recovered in the end zone to give MP the lead just six seconds in.

The Golden Eagles also halted a scoring drive with a fumble in the second quarter as senior running back Jacob Broselle lost the ball after a gain of 13, and the Tomahawks recovered at their own 15 yard line.

The Tomahawks also squandered a potential scoring drive with a fumble. After driving down to the Ferndale 11, a fumbled exchange between quarterback Jake Elwood and Carson was recovered by the Golden Eagles with 47 seconds remaining in the first half.

Both teams finished with three turnovers each.

Ryan Pelton finished with 78 yards on 18 carries and both Ferndale scores. Following Thomas Broselle’s fumble on the opening kickoff, the Golden Eagles responded with a 15-play, 78-yard scoring drive capped by Pelton’s nine yard TD run. Pelton added a 24-yard score to tie the game at 14-14 in the second quarter.

The Golden Eagles will close the season against Stanwood next Friday.

MP will have a chance to lock up the Wesco 3A North title when it takes on Arlington (6-1, 5-1) next Friday.

The Tomahawks last won the league title in 2014.

“It’s a big one,”Brandon Carson said. “It’s for a league title. It’s why the kids lift weights, and go to the camps, and do all that stuff, it’s to play in games like this. It’s great for high school football.”