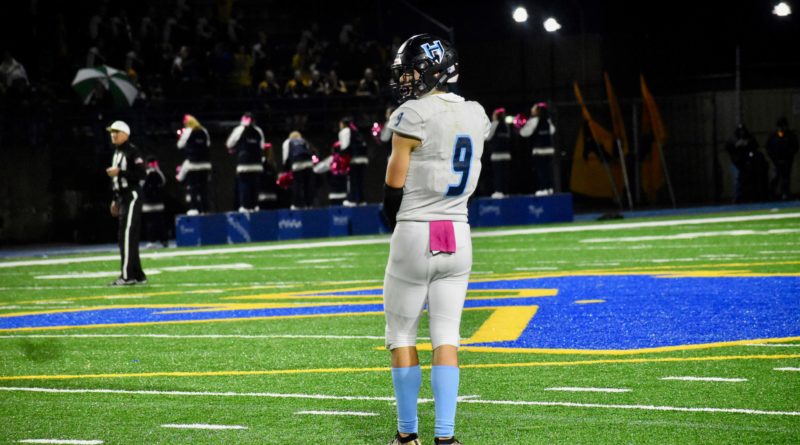 KELSO — Over the past three seasons Hockinson has taken state by storm with its multifaceted pass-happy offense.

On Friday, in a torrential downpour against hard-nosed Kelso, the Hawks were thrown off their game.

They adjusted, and then some. Hockinson senior caught the momentum-stopping interception and had the game-sealing run Levi Crum to help beat Kelso 21-14 at Kelso High School’s Schroeder Field in a week seven nonleague bout, a matchup that almost didn’t happen.

“The energy was there,” Crum said. “You can’t teach energy, and we brought that tonight.”

Levi Crum can beat you in many ways

As a junior, Levi Crum carried the torch as a first-year starting quarterback, establishing himself as a running and passing threat during the Hawks’ 2A state title run.

Turns out he can do even more.

Crum tossed for 232 yards and three touchdowns, ran for 90 yards on 12 carries and caught the game-sealing interception when Kelso was facing fourth and long in the red zone.

Crum sat back in zone coverage and saw Kelso quarterback Marshall Coleman roll out with a flood combo, and the senior QB/DB broke on it. It was the second time in the game Hockinson stopped a red zone trip with an interception.

“Athlete,” Brammer said. “That’s one word I’ve got to say. Both ways he’s a competitor.”

Hockinson lost four-star receiver Sawyer Racanelli for his entire senior season when he tore his ACL over the summer.

How have the Hawks replaced the reigning 2A state player of the year?

By committee. Just look at Friday for proof.

But Hockinson hasn’t just leaned on one receiver, mirroring its playoff run in 2018. Expect that to continue this season.

A message to both teams: schedule this again

Both teams were heading for a week seven bye, until Kelso’s week four opponent, Aberdeen, forfeited. In need of a home game, the Hilanders phoned Hockinson, which had called over the summer asking for the very same thing — the forfeit forced Kelso’s hand.

Sure, coaches — particularly Kelso coach Steve Amrine — has injuries to worry about heading into a blitz of a league title race in the final three weeks of the season, but Friday’s game was an important litmus test for both programs as the postseason looms in the not-so-distant future.

It’s important to note, the game endured with no major injuries, came down to the final possession in the last four minutes and served as a valuable measuring stick for both programs.

Why not make this a yearly match?

“I’ve been chipping at the bit this whole year just to get a chance to play at this top-level competition,” Webb said.

Hockinson needed this win. For itself.

If the Hawks are to make a legitimate run at a third consecutive 2A state championship, they are going to have to get through a crowded bunch at the top of the classification — and perhaps get a stroke of luck.

And though Friday’s win over Kelso didn’t effect the 2A Greater St. Helens League standings, it sure went a long way for a Hockinson team that was itching for a test after three consecutive league blowout wins, and perhaps more on the horizon.

“At this point of the season, we need to be challenged,” Hockinson coach Rick Steele said in the days leading up to the game.

And Hockinson’s play-anybody philosophy has helped the Hawks test themselves, and grow at key junctures of the regular season.

Each of the past five seasons, Kelso has been the runner-up in the 3A Greater St. Helens league title race — the last three falling to Mountain View, and two before that to Columbia River.

There’s a real possibility the Hilanders could break through this season.

Evergreen handed Mountain View its first loss of league play Friday night, meaning Prairie, Kelso and the Thunder each have one league loss with three weeks left in the season.

Kelso plays Mountain View in week eight. A win could go a long way in a league title race that will be decided in the margins.

“Film doesn’t lie, so when we look at (this) film we’re going to pick our offense apart and defense apart and figure out what we need to do better next week.