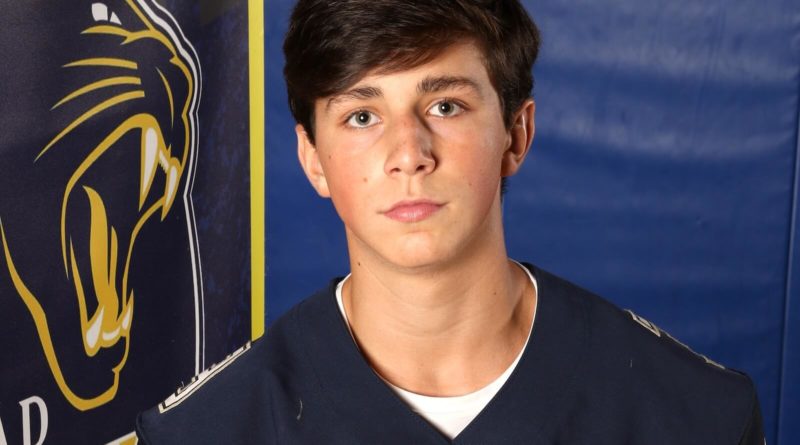 It’s already been snowing in Spokane this fall, so Mead High School quarterback Ryan Blair was clearly not opposed to the alternative last weekend.

And at kickoff against Marina High School, it was still toasty warm.

Then, Blair heated up the place even more with a record-setting performance, throwing for 513 yards and eight touchdowns in the Panthers’ 63-27 victory.

It was not only a school record, it ranks No. 3 all-time in Greater Spokane League history (Shadle Park’s Brett Rypien has the top two marks with a state-record 613 yards, and 577) – and stands tied for 11th all-time in Washington with Elma’s Ben Dougherty (1997) and Lynden’s Ty Taubenheim (1999).

“We knew it was a non-league game,” Blair said, “but you don’t want to lose a game in California.”

“They had one (safety) high and manned us up,” Blair said. “So we used a similar game plan … except I took more shots (downfield).”

Mead’s first series was a three-play touchdown – and it was obvious from that point on that Blair (6-0, 175), a senior, was going to have a big night. He completed 22 of his 27 passing attempts.

“I had no idea,” Blair said. “Going into the third quarter, teammates were asking me how many yards I had, and how many touchdowns. Honestly when it was over, I thought it was in the high 300 (yard range).”

As he was talking to family who drove up from Phoenix, Blair was approached by a Mead assistant coach and told what his final game totals were.

“It was memorable,” Blair said.

REVVING UP THE REVIVAL AT TEKOA-ROSALIA

When 1980 Rosalia High School graduate Jay Scholz moved back to town from Florida in 2014, he had no intentions of coaching high school football – even though he was a former wide receiver.

He bought the town’s old bowling alley, and turned it into a hot-rod shop (Rose Garage) where he refurbishes muscle cars.

But last season, combined Tekoa-Rosalia, which had won two games in a three-year span (2014-16), needed a coach. It eventually hired Cliff Harris – who then turned to Scholz to coordinate the offense.

The Timberwolves went 7-2 in the 1B Northeast North.

This season, Scholz took over the entire program – and the team is off to a 5-1 start behind quarterback Anthony Gehring and wide receiver Garrett Naught, also the reigning 1B state high jump champion.

“I like it because it is challenging – it is like playing chess with humans,” Scholz said. “And I have some good kids in terms of talent, and it makes it seem like everything I do is right.”

Most of the team’s home games are in Rosalia where there is a field with lights.