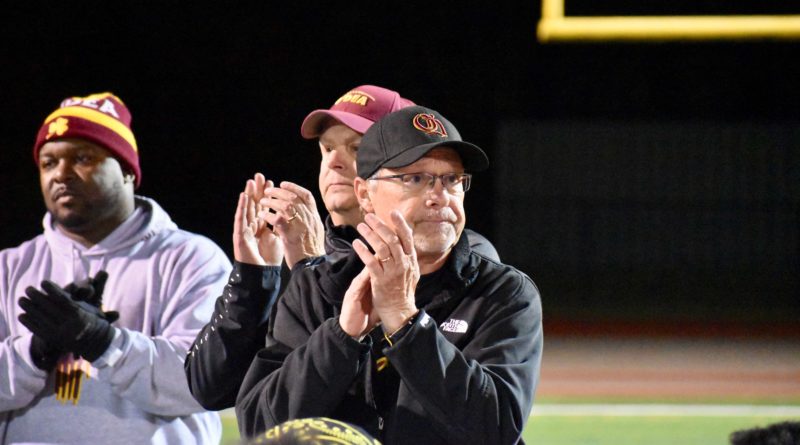 SAMMAMISH — Monte Kohler has spent more than half his life coaching football at O’Dea High School.

In 34-plus seasons, he’s led the school to four Class 3A titles. He is the winningest active coach in the state – and someday, good fortune willing – he will be tops overall.

But on Friday night, he made a proclamation to his team in the post-game huddle that few expected.

Heavy underdogs to what many considered an indefensible – and invincible – opponent, the second-ranked Irish stunned No. 1 Eastside Catholic, 28-6, in Sammamish.

O’Dea’s win snapped the Crusaders’ 18-game winning streak, dating back to early last season. Two of those wins came against the Irish in 2018 – including a 31-13 victory in the 3A title game.

But on Friday, the Irish held Eastside Catholic to 190 total yards, and its lowest point total since 2012.

“We are going to enjoy this one,” Kohler said.

Here are five takeaways from the Eastside Catholic-O’Dea game:

The first one is Milton Hopkins Jr., a first-year starter at quarterback. He rushed for 100 yards and a pair of short touchdown runs, and added 63 passing yards and another score through the air.

The next one is tailback Cameron Daniels, who has enough strength to run inside, but also plenty of burst to run past defenders on the outside. He finished with a game-high 133 yards on 30 carries, including a first-quarter touchdown.

And fullback Tajj Dyles is enough of a dive-play hammer (37 yards on nine carries) that defenses have to honor him as a running threat. He is also a devastating lead blocker.

“We came out and played fast and physical, and when we do that, we are a tough team to stop,” Daniels said.

Trailing 14-6 at halftime, Eastside Catholic – in front of its home crowd – needed to come out and get a quick stop on defense.

It slowly turned out to be the gut-punch drive that essentially put the Crusaders away for good.

Hopkins was unstoppable much of the night, but particularly on this series. He converted a first third down (third-and-6) by breaking two tackles on a 9-yard run.

Two plays later, facing a third-and-10, he delivered a pass along the left sideline where only Cooper Mathers could catch it – low and out of harm’s way. The connection was good for 12 yards.

And two plays after that, O’Dea had a third-and-12 from the Crusaders’ 39. Seeing a clear path up the middle, Hopkins scrambled out of the pocket and scampered for a 14-yard gain.

The final third-down conversion (4-for-4 total) was Hopkins’ TD run.

“To be the one to spread the dagger, it was a big moment,” Hopkins said.

KOHLER’S BIGGEST EMPHASIS ALL WEEK TO HIS TEAM: DON’T GIVE UP THE BIG PLAY

It’s no secret the Crusaders get plenty of their offensive juice off of big-chunk plays.

Eastside Catholic had three plays of 20 or more yards Friday night, and they all came in the first quarter – a 24-yard run by Sam Adams, a game-best 40-yard run by Gio Ursino and Kobe Muasau’s 24-yard pass to Gee Scott Jr.

None of them resulted in touchdowns.

“That was huge. We know they couldn’t necessarily drive on us without getting big plays,” O’Dea defenisve back Davyn Patu said. “We were communicating well on defense. It had to be really good.”

The Crusaders were held to 36 yards in the second half.

IF THERE IS A BETTER RUN BLOCKER IN THE STATE THAN O’DEA’S OWEN PRENTICE … STEP FORWARD!

Especially junior guard Owen Prentice, one of the top offensive line recruits in the class of 2021.

Seemingly all night, Prentice was the inside rocket getting off the ball and opening creases for Hopkins, Daniels and Dyles.

“This game isn’t overly complicated, right? If you block and tackle, you are probably going to do pretty well,” Daste said. “We didn’t do a great job of either tonight, and they gave it to us a little bit.”

OFFENSE COULD NOT BAIL OUT EASTSIDE CATHOLIC’S SLOW START

What might have been overlooked, until Friday night, is the fact that when O’Dea tallied the game’s first touchdown, it marked the fourth time in the past five games that Eastside Catholic had trailed in the early going.

Against O’Dea, however, they made mistakes: A red-zone interception by Muasau; a foiled fake-punt pass by Scott; allowing a blocked PAT kick; and converting just one of five fourth-down attempts.

But the most glaring mistakes were the 14 penalties for 133 yards.

On the drive that Muasau was picked off by Patu at the goal-line early in the second quarter, the Crusaders were called for six penalties.

“We have to be more disciplined,” Daste said.