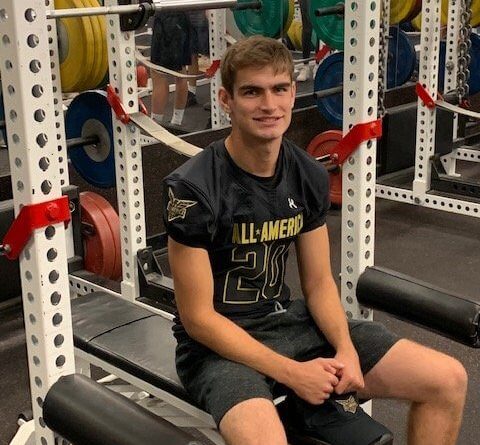 Bryce Leighton left for Wisconsin in late July to compete in a Kohl’s kicking camp with elite kickers, punters and long snappers. The Camas punter had no offers to that point, and figured

Leighton was presented a jersey last Friday during a pep assembly at Camas High School as a part of being selected to play in the 2020 Under Armour All-America High School football game, an honor he nabbed after finishing that July camp as the top-ranked punter among 200 of his peers from around the country.

At the camp that served as a recruiting breakthrough, he surprised himself.

“It’s funny I’d met a lot of top punters there through Kohl’s kicking,” Leighton said. “I said my goal was to finish 20th in the punts and kickoffs. If I get top-20 I’lll be super happy.”

Instead a first place finish netted him an offer from Montana State, and he committed shortly thereafter.

Leighton, a three-star Montana State commit and Scorebook Live preseason all-state selection, is one of more than 100 high school football players around the country chosen for the showcase, which takes place on Jan. 2 at Camping World Stadium in Orlando, Fla. at 6 p.m. with ESPN2 television billing.

“It was crazy having the assembly and having everyone cheer,” Leighton said. “It was an awesome honor, especially in Camas everyone’s so supportive.”

And the senior, rated a three-star recruit by the site 247 Sports, is one of two players across the state selected to play in the game. Kennedy Catholic five-star DE Sav’ell Smalls was presented with his jersey the week prior. (During the ceremony, he committed to the University of Washington in a move that surprised many.)

According to a release by the game organizers, 56 first round NFL Draft picks and 23 Pro Bowl selections have played in the game, which enters its 13th year.

Here is the full roster of invitees and here are more photos of Leighton, courtesy of Korey Schrock:

Shane Keck became Glacier Peak’s head coach days before the 2019 season began, and brought with him three years of head coaching experience in the Wesco.

When GP coach Nick Bender stepped down the Monday before the team’s season-opener due to health issues involving his back, Keck was more or less thrown into the fire.

“There was some talk about it, didn’t really know if it was going to go down,” Keck said. “You’re honored and blessed to have the job, (though) it’s not the circumstance you’d want.”

Quickly thereafter, Keck said it was business as usual. Bender continues to serve as the Grizzlies’ offensive coordinator, and the entire coaching staff remained the same otherwise. Keck said his goal was to make sure and not change much, starting with practice format.

All three seasons as Cascade of Everett’s head coach, Keck lost to Lake Stevens. And this Friday, the undefeated Grizzlies (5-0, 3-0) face its toughest challenge of the season in No. 1 Lake Stevens.

It may rank among the biggest tests in Keck’s head coaching career, too.

“It’s exciting,” Keck said. “You get to measure yourself against what’s been the best items in our league five years and running and see where you’re at. We haven’t played our best football all year, we’re starting to put it all together. We’ll go test ourselves, and see what we’re made of.”

Two Washington high school football standouts each added another offer from Pac-12 teams recently, and more will likely be on the way.

Kennedy Catholic wide receiver Jabez Tinae, a 6-foot-1, 187-pound junior who recruiting site 247 Sports designates as a four-star prospect, picked up an offer from Cal, and junior Mount Si quarterback Clay Millen was offered by Arizona on the same day last week, further bolstering the profile of two major contributors to likely 4A playoff contenders from the class of 2021.

For Tinae, a marquee member of the electric Lancers receiving corps, Cal marks the sixth Pac-12 offer. He also sports an offer from Nebraska.

Millen, a 6-foot-3 do-it-all quarterback, UA is the second team to offer him altogether. He was also offered by Oregon, where his brother Cale, a fellow three-star quarterback, is a freshman.