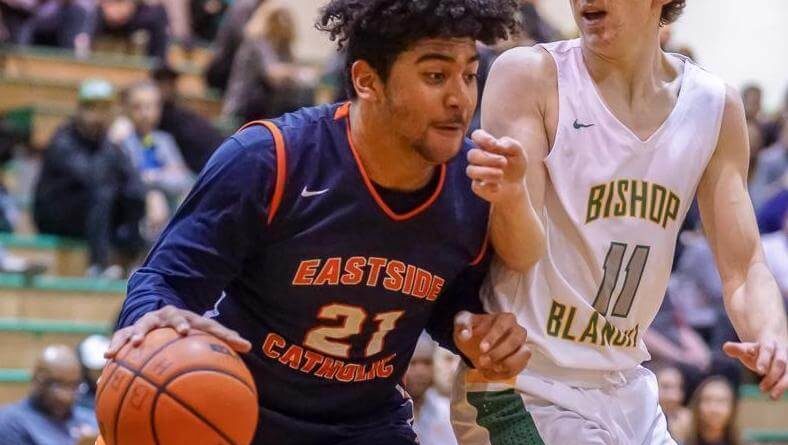 Athletically, there aren’t too many programs in Washington that can hang with top-ranked Eastside Catholic.

And for the better part of a quarter and a half, the two Metro League rivals went toe to toe – evenly.

The Crusaders then found their stride, scoring four second-quarter touchdowns to turn away the No. 6 Bulldogs, 42-21, at Memorial Stadium in Seattle.

“Our guys prepared like we were playing against a really good Garfield tonight – and that is what we got tonight,” Eastside Catholic coach Dominic Daste said.

Here are five takeaways from the Eastside Catholic-Garfield game:

In the first month, Daste has scaled Adams’ offensive workload back – partly because of a nagging shoulder injury, and partly because his do-everything senior is a big contributor on defense.

But it was obvious the Crusaders wanted to get Adams involved early on offense – and he did not disappoint.

He ripped off runs of 12 and 13 yards to start the game, saw carries on four of Eastside Catholic’s first five players – and finished with a game-high 160 yards on 10 carries.

The highlight was his 35-yard touchdown scamper along the right hash that broke a 13-13 tie in the second quarter.

“Sam is starting to get into a rhythm a little bit,” Daste said.

It didn’t take long for first-year offensive coordinator Drew Miller to figure out who needed to touch the football most often.

Adams, wide receiver Gee Scott Jr. and tight end D.J. Rogers are all capable of turning in a big play at any time.

All three broke the 100-yard mark in just over a half of work Friday: Adams had 160 rushing yards while Scott (four catches, 143 yards) and Rogers (four catches, 131 yards) posted 100-yard receiving days. And they accounted for four touchdowns – all 35 yards or longer.

“It is tough (to defend us),” Daste said. “We’ve seen a lot coverage-wise … and when they start changing coverage and playing guys outside the box, kind of like they did tonight, we feel like we can run the ball decently, too.”

WHATEVER J.T. TUIMOLOAU HITS, HE DESTROYS

It wasn’t the greatest first half for the Crusaders’ defense, which gave up a pair of first-quarter touchdowns.

But Tuimoloau, the nation’s top defensive lineman recruit in the class of 2021, still made his usual impact.

Early in the second quarter, Tuimoloau recorded two tackles for loss on the same drive, dropping running back Avery Morrow for a 1-yard loss, and sacking quarterback (and former Eastside Catholic teammate) Javon Tade for a 3-yard loss.

Then came the biggest blow with 48 seconds to go in the first half.

Seeing Tuimoloau bust through the line, Tade trying breaking to the outside on a pass play – to no avail. The 6-foot-5, 275-pounder came crashing right on top of him for another sack, knocking him out of the game with a collarbone injury.

“There are a couple of guys up front, when they fall on you … it is going to hurt,” Daste said.

You aren’t going to see an Eastside Catholic opponent come out and score touchdowns on its opening two drives very often.

Garfield did – on Isaiah Kenard’s 1-yard run (set up by Morrow’s 35-yard run) for the first score, and Tade’s 26-yard pass to Tierre Monroe.

In fact, on those two drives, the Bulldogs broke off six plays of 10 or more yards to build a 13-7 lead.

“We definitely came out and did what we were supposed to do, and executed,” Garfield coach Reggie Witherspoon II said. “But we knew against this team, you can’t just execute sometimes – you’ve got to do it all the time … and it kind of got away from us.”

EASTSIDE CATHOLIC KNOWS WHO’S NEXT ON THE SCHEDULE: O’DEA

Next week, it is the Metro League showdown: No. 1 Eastside Catholic hosting No. 2 O’Dea in the rematch of last season’s Class 3A state title game.

The Crusaders have won the past three meetings, sweeping 31-13 games in both the regular season and in the playoffs.

“It is a team we are very familiar with. … and we will get their best shot,” Daste said. “For us, it is about enjoying the moment – and enjoying the competition. When our guys show up Monday, they will be ready to go.”